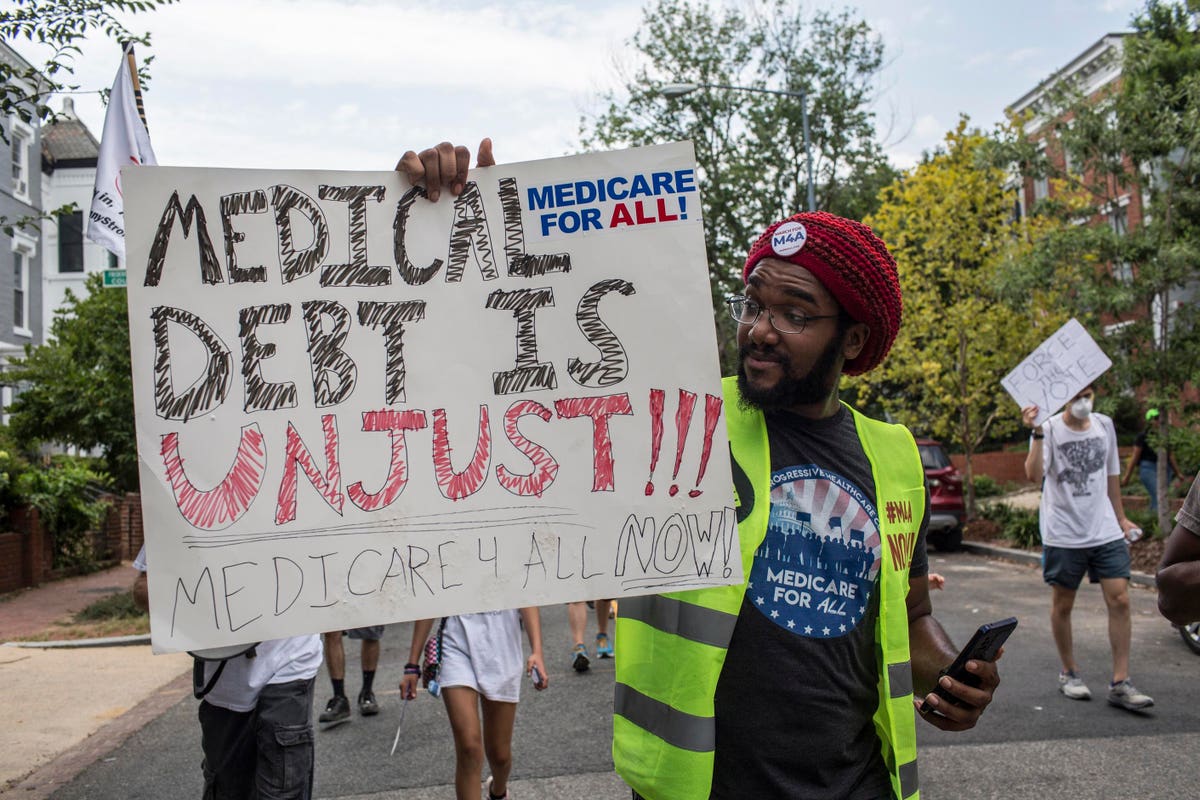 Bre Hartel, 48, has $1,800 in outstanding medical debt. She’s one of millions of Americans struggling to pay their medical bills.

During routine blood work in May 2021, Hartel discovered that she had high blood pressure. Experiencing blurred vision and nausea, she was told if she didn’t see a doctor right away, she could have a stroke. She headed straight to the emergency room.

That visit may have saved Hartel’s life but the medical bills that piled on top of her other expenses still weigh her down.

“Because of Covid-19, it’s financially rough out here for everyone,” Hartel said.

Fully half of Americans now carry medical debt, up from 46% in 2020, according to new data from Debt.com, a consumer financial education company.

More than half (57%) of Americans with medical debt owe at least $1,000, driven by diagnostic tests, hospitalizations, and emergency room visits, the survey showed.

“In a weird way, Covid didn’t have as big an impact on medical debt as you might think–but only because medical debt was such a huge problem before the pandemic,” said Don Silvestri, CEO of Debt.com. “If anything, Covid forced more people to consider the seriousness of the problem.”

Though more people reported having medical debt compared to last year, less than half (46%) said their bills were in collections this year, down from 56% in 2020.

With those categories included, Americans may actually owe as much as $1 trillion in medical debt, according to Allison Sesso, executive director of RIP Medical Debt, a nonprofit organization that buys consumer debt from healthcare providers or aggregators for pennies on the dollar.

Instead of hounding consumers to pay, RIP Medical Debt uses donated funds to forgive medical debt that represents at least 5% of annual income for lower-income people.

Sesso doesn’t even like to use the term “forgive” in the context of medical debt because it implies that people with debt have done something wrong. But Sesso wants consumers to know that owing money isn’t a personal failing.

“The system is rigged against them, for real,” Sesso said. “Medical debt is uniquely American and it’s a by-product of the broken financing of our healthcare system.”

Unlike other types of consumer debt, medical bills are hard to predict and hard to prevent, even for people with health insurance.

“The majority of medical debt is owned by people who don’t have the money to pay for it,” Sesso said.

Because many consumers are not prepared to absorb their healthcare costs, medical debt tends to be hard to collect and therefore, particularly inexpensive–or “dirt cheap” according to Sesso–on the debt market.

Enter RIP Medical Debt. On average, they can buy $100 of debt for a dollar. In total, Sesso says the organization has retired $5 billion in medical debt.

Mark Newman, Nomi Health’s cofounder and CEO, realized how much cost hides out in the healthcare system after his son was born.

A hospital finance person asked him to pay 10% of the bill before he left the hospital. Newman, who was CEO of another company at the time, offered to pay off the whole amount.

If he did that, the hospital representative offered him a deal: “I’ll take 30% off,” she told him.

That got Newman thinking: If he was able to get a much lower price by paying cash, what was happening for his employees who had fewer financial resources? And, what was his company paying the health insurer for if their negotiated rates cost more than what he could get on his own?

He launched Nomi Health to take middleman costs out of the healthcare system and enable the kind of direct payments that had saved him so much money.

“The idea that this problem exists in our states, especially as we’re emerging out of pandemic life…it was just gross,” he said. “Healthcare is so broken that you can buy [debt] cheaper and you can clean up the mess for a penny relative to the dollar that you thought it was. It was just overall building the case study around why we need a new system and a new model.”

Given that healthcare providers already accept pennies on the dollar for unpaid medical bills, even people who don’t get charitable relief can try negotiating.

That approach seems to be gaining steam.

According to the Debt.com survey, more people are negotiating medical debt than a year ago. In 2021, 34% of respondents said they had successfully negotiated their medical debt, compared with 27% the year before.

Andy Schoonover, CEO of CrowdHealth, a membership-based alternative to health insurance, paid off more than $10,000 in medical bills that his insurer refused to pay for a procedure his daughter needed.

Schoonover managed the bills by disputing some and negotiating the rest to pay it off over time.

But it wasn’t easy.

“At the time, it was overwhelming and so frustrating considering we had done everything right and yet our claim was still rejected,” Schoonover said. “You’re at a crossroads where you have to decide what bills to pay and it puts an inordinate strain on you emotionally. It burdened our family.”

Medical debt doesn’t just present emotional and financial burdens. It can keep people from getting the healthcare they need.

Hartel’s bills haven’t gone to collections, but the hospital that treated her has called several times, though the debt is only a few months old. It makes her want to avoid using services in the future.

“I feel like I will think twice about going to an emergency room,” Hartel said. “If I’m having a heart attack, I’ll take a baby aspirin first!”

For Sesso, these types of trade-offs don’t seem right.

“I question how much money we should be expecting [consumers to pay],” she said. “At what point is it too much that we have this expectation that individuals pull money out of their own pocket to pay for their healthcare needs?”