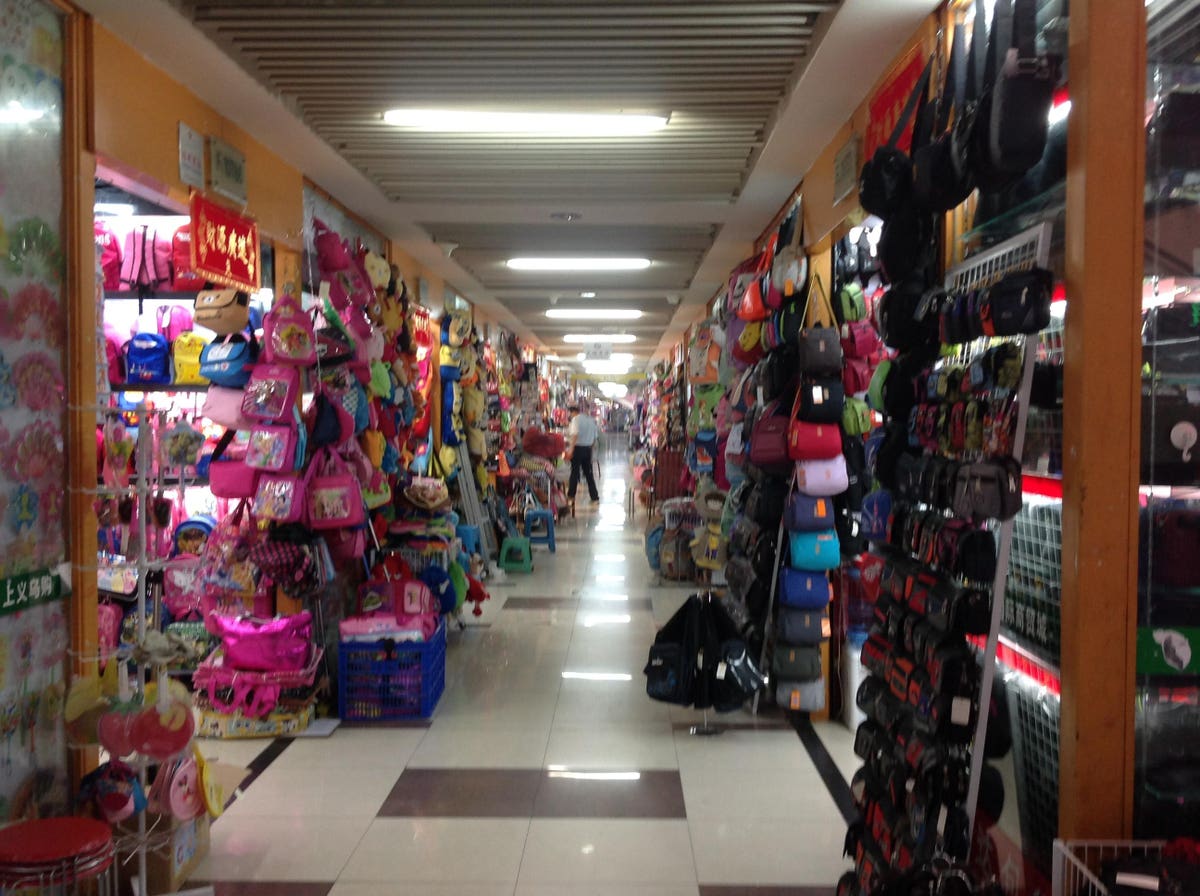 Alibaba’s recent results give us the uncomfortable feeling that Chinese e-commerce might not actually be growing. In the public mind, Alibaba represents the blue-sky future of e-commerce in China. That sky turns out to be grayish.

Bags on sale at a wholesale market in Yiwu, epicenter of Alibaba’s Taobao
Photo by Anne Stevenson-Yang

The FY2021 annual report will not come out until mid-August, but the Q4 and annual overview filed in May gives us a good preview. Alibaba does, of course, report high growth: 64% revenue growth for the March quarter and 41% for the fiscal year ending March 31. But the great majority of revenue growth came from consolidating the Sun Art convenience store chain plus pulling in revenue from the brick-and-mortar businesses, mainly Tmall Supermarket and Freshippo. Arguably all the rest came from buying and consolidating new businesses, like Kaola, which BABA bought from Netease in September 2019.

The acquired revenue has been purchased by issuing shares. Investor dilution closely tracks revenue growth, indicating that Alibaba is using its inflated shares to buy up existing businesses and declare their revenue as its own.

It’s not just the revenue. Alibaba derives its profit largely from asset write-ups. Write-ups added $11.1 billion to income in FY2021, before even counting other squirrely things like “equity method accounting income.” Total net income was $19 billion. The “fair value appreciation” was almost exactly the same in FY2020, when most of the write-up came from Alibaba’s 33% share in Ant Financial, premised on Ant’s IPO plan but not reversed despite the indefinite marooning of that plan.

In fact, nearly the entire net worth of the company derives from writing up asset values. Since IPO, Alibaba has reported retained earnings of about $84.7 billion. Fair-value gains on investments in total contributed $22.9 billion or 27% of that amount, and goodwill plus net intangible assets $56 billion for a total of $78.9 billion in dubious assets acquired since IPO in those three categories.

In other words, Alibaba raises billions overseas and hauls the money back to China, where it purchases assets at inflated prices and calls the overpayment “goodwill.” No wonder policy has been accommodating. A wealth manager in the Alibaba hometown of Hangzhou once told me that all he needed was to use his Rolodex of Alibaba employees to scare up hard currency. Not by accident is the real estate market in Hangzhou the hottest in the country.

A residential tower in Hangzhou
Photo by Anne Stevenson-Yang

Alibaba has issued a plethora of shares to its own and Ant Financial’s employees, racking up about $26.5 billion in share-based compensation from IPO date through March this year. Alibaba’s U.S.-listed stock has been one of China’s most important channels for hard-currency acquisition and capital flight.

The point is not that Alibaba is an Enron-scale fraud–although I believe it is. The point is investors in Chinese stocks are buying a dream of growth, and if Alibaba were growing at the rate of Walmart–about 3% annually–no one would own it. Alibaba management knows that the company must demonstrate growth befitting the China Dream’s core theme of an emerging consumer powerhouse.

Already, Alibaba claims more than one in eight people on the planet as active users. In a country where per capita GDP reached about $10,000 in 2020, on a par with Botswana, Alibaba reports spending of $1,400 on average per consumer in China each year on its platforms. For reference, that’s twice the $700 that Amazon reports as its customer’s average spend per year on the platform. Annual active consumers in China number 891 million, according to the company, so Alibaba customers are by definition “average” for China.

Alibaba’s true contribution to the Chinese economy is not its big, chaotic bazaar of goods and services but its massive investment arm. Participation in an investment round by Alibaba guarantees an up-round for a private company. Alibaba has thousands of subsidiaries and investees, not to mention affiliates like Yunfeng Capital, with 175 funding rounds.

For State-owned companies, China created its own investment bank, China International Capital Corp. (CICC), which in the heady decade from 1998-2008 took a slice of nearly all State-sponsored market flotations. But there was no commodious channel for bringing capital gains from the private economy into the hands of government-related individuals and institutions.

Enter Alibaba, Tencent, and to a lesser extent, Baidu. Through a combination of official favor and dexterity in willing foreign markets, the BAT triumvirate become the capital aggregator for the private economy and the transmission mechanism that moves capital gains into the hands of the few, the privileged.

As long as foreign investors have been willing to support a rising share price, Alibaba has functioned as a speedy channel for Chinese people with special access to the stock to obtain billions in offshore holdings. And Alibaba has not asked Chinese banks to support its hard-currency acquisitions–the foreign bondholders have been all too willing to do that.

Alibaba’s amazing success created an irresistible gravity dragging it to the center of the Middle Kingdom. But the reliance on consolidating brick-and-mortar businesses to provide growth reveals vulnerability in the China Dream story. It should not be long before it is clear whether or not Ali and the entire new economy can escape the soft sands of Xi Jinping’s new, politicly infused, highly centralized 21st century dream.