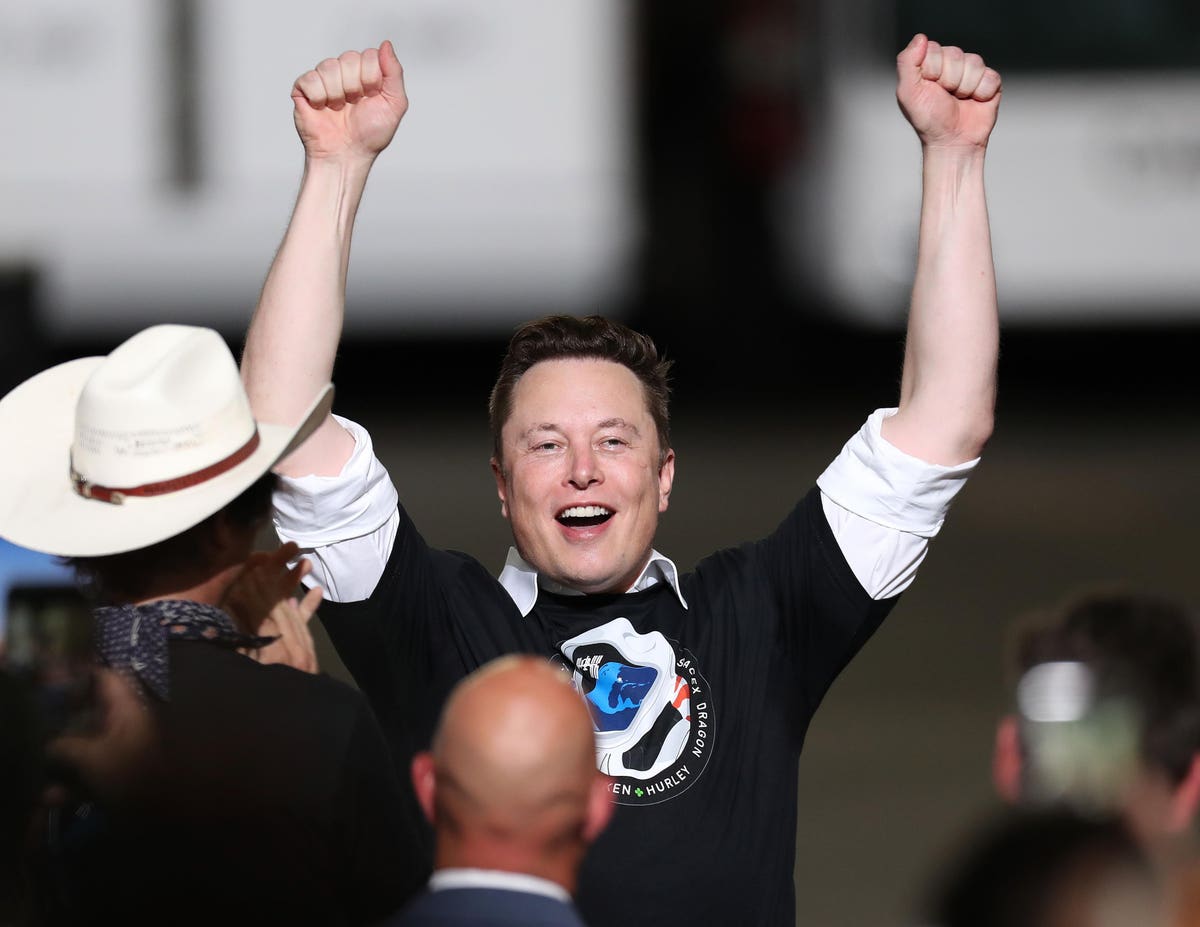 CAPE CANAVERAL, FLORIDA – MAY 30: Spacex founder Elon Musk celebrates after the successful launch of … [+] the SpaceX Falcon 9 rocket with the manned Crew Dragon spacecraft at the Kennedy Space Center on May 30, 2020 in Cape Canaveral, Florida. Earlier in the day NASA astronauts Bob Behnken and Doug Hurley lifted off an inaugural flight and will be the first people since the end of the Space Shuttle program in 2011 to be launched into space from the United States. (Photo by Joe Raedle/Getty Images)
Getty Images

Does that mean you should buy Tesla and sell Amazon? A look at the stock charts of both companies suggests that Amazon is stuck while Tesla stock has been accelerating since hitting a low for the year in May. Both badly lag the S&P 500 though.

I can’t predict the future but it looks like Tesla has upward momentum and Amazon needs a powerful catalyst to make it an attractive investment. In the battle between CEOs, Musk has a clear lead over recently appointed Bezos successor Andy Jassy.

Until Amazon reports surprisingly fast revenue growth, Jassy may be mired in operational challenges that could keep the stock in limbo.

(I have no financial interest in the securities mentioned in this post).

Musk was responding to a tweet from Bezos which referenced a 1999 Barron’s cover story that doubted whether Amazon would survive thanks to its business model which it dubbed “a middleman.”

Bezos’s October 10 tweet added, “Listen and be open, but don’t let anybody tell you who you are…Today, Amazon is one of the world’s most successful companies and has revolutionized two entirely different industries.”

Forbes says that Musk is worth $203.5 billion as of October 12 — 7.4% more than Bezos’ $189.5 billion. These net worth estimates include their stakes in privately held companies such as SpaceX (Musk) and Blue Origin and the Washington Post (Bezos).

For those of us who lack the magic ingredients to occupy the top spot on the list of the world’s wealthiest people, we may be able to enhance our net worth by buying shares in their public companies.

A look at the 2021 performance of their shares tells two different stories. Tesla — up 8.5% on the year — is on a roll after a nasty plunge, while Amazon appears to be dead money — having risen a mere 1.7% this year.

Tesla has the edge in revenue growth. For the June 2021-ending quarter, its revenues grew about 98% to nearly $12 billion while net income soared 998% to $1.1 billion.

Its forecast for total 2021 deliveries — which will be affected by supply constraints — is to grow more than 50% over 2020. Tesla is blowing through that number — it just announced a 73% surge in third quarter deliveries t0 241,300 vehicles.

Amazon’s final quarter with Bezos as CEO was less impressive. As I wrote in July, Amazon’s revenue grew 27% to $113 billion while Jassy forecast 13% revenue growth in the third quarter — a major slowdown. To be sure, Amazon reported 48% net income growth to about $7.8 billion in the second quarter.

Simply put — Amazon has set a low bar for growth while Tesla’s expected revenue growth is at least twice as fast.

Analysts are making it somewhat harder for Amazon to exceed expectations because they more bullish than Amazon’s forecast for the current quarter. How so? Analysts are looking for 16.1% growth for the third quarter and expect even slower growth — 13.7% — in the final quarter of 2021.

To be fair, Amazon is likely to enjoy a record quarter. It started the holiday shopping season early, is planning to hire 450,000 employees, and is expanding its footprint.

Sadly, unless Amazon reports growth that exceeds Wall Street’s estimates — it will fall way short of the 27% annual rate of growth it enjoyed in the last decade and its stock will lack a catalyst.

Tesla stock could rise significantly. A bullish SeekingAlpha report suggests it will reach $2,500 by 2030. Who knows whether that will happen?

To be fair, Tesla is a leader in a fast growing industry.

SeekingAlpha argues that the EVs — in which Tesla is the market leader — are taking share from the traditional vehicle market and that Tesla is the leader there.

Tesla enjoys many competitive advantages — such as its “approach to marketing, sales, software development, battery production, supercharging, design, development, and production” — giving it the global EV market lead — with about 14.6% share.

While Musk is a more entertaining leader than Jassy, neither Tesla nor Amazon are coming anywhere near close to beating the S&P 500. Tesla is growing much faster and has a better chance of exceeding expectations than does Amazon.

If Jassy has another new business for Amazon — along the lines of AWS which he is credited with helping create — it could be years before Amazon can restore the 27% top line revenue growth rate in enjoyed in Bezos’s last decade at the helm.