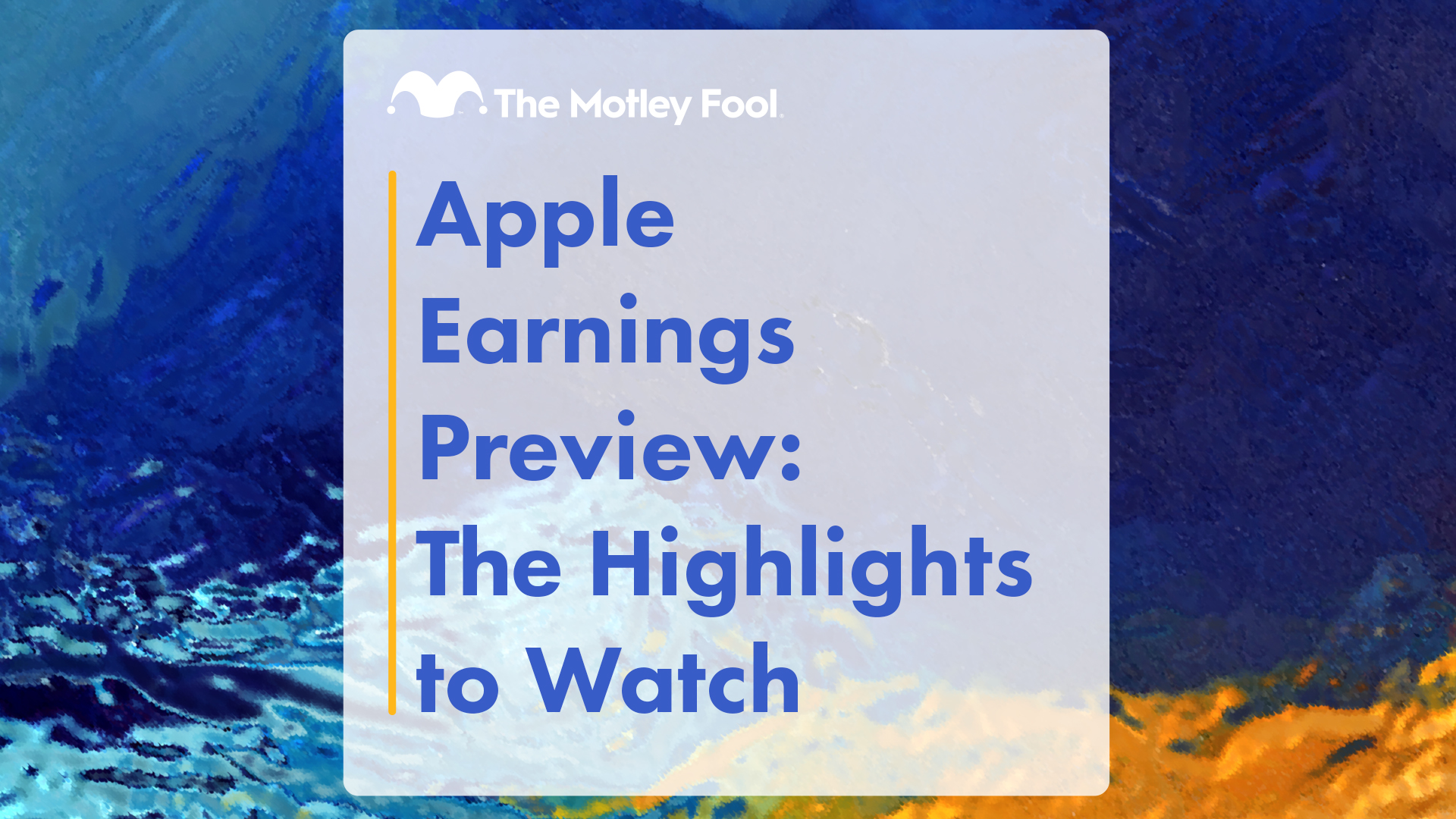 Apple (NASDAQ:AAPL) is set to announce its quarterly earnings results soon. In this video from “Beat & Raise” on Motley Fool Live, recorded on Oct. 6, Fool.com contributor Demitri Kalogeropoulos shares his perspective about the upcoming earnings report from Apple, set for Oct. 28.

Demitri Kalogeropoulos: Apple is going to be reporting earnings on the 28th after market close.

Expectations, are Apple is in the middle of this historic growth. Right now, expectations are for that to continue, and you’ll see that in all these projected numbers for investors are looking for. This is their fiscal Q4 revenue, so the end of their fiscal year, and growing 31% on top of a huge growth a year ago to about $85 billion. Earnings per share are supposed to grow even more.

Part of that is because we’re seeing some expanding profitability and earnings are supposed to grow 68 percent to $1.23 a share. This is a closely watched stock, obviously, in part because it accounts for such a high percentage of all the S&P 500 earnings, so it makes sense that we’d be watching that.

I think just to break down a few things to watch, it makes sense to look in terms of products and services that is the way that CEO Tim Cook and management wants us to look at Apple, and I think it makes sense even though hardware still, most of the business, particularly iPhone.

Some of the hardware numbers to look at, iPhone 13 demand. Obviously, the sales aren’t going to impact this quarter because they’ve just started selling these, but Cook and his team are going to be able to talk about their ordering and they’re going to have a good indication of the initial demand for that product compared to iPhone 12.

Remember, iPhone 12, we talked a lot about the 5G upgrade being this super-cycle situation, and it did, in some cases, lead to lots of upgrades, but we do still have, by some estimate, somewhere over 400 million older iPhones out there.

These are all consumers that are looking for reasons to upgrade, and so one big question is how many of them are going to take the plunge, thanks to this iPhone 13?

Then we’re going to look at the 13 Pro too. A reservation times it’s been a lot harder to get the 13 proteasome. I wonder if a lot of people in today’s economy are trending toward that more premium option. We’ll talk about that.

Other products we got the Mac, of course, refreshed Macs, and refreshed iPads. The iPad segment is interesting because it had its best quarter in about a decade last quarter. They’ve really refresh that product lines, so it’s become a bigger growth driver. Then we’ll hear some indications about the Apple Watch.

That I believe the new series of Apple Watches. I think Apple just said this week is coming out. I think we can do pre-orders on October 8, so just a couple of days. We’re not going to have pre-order numbers necessarily talked about, but Apple is going to have some indications about what it thinks that that’s going to do.

Then, of course, moving onto services which is a smaller portion of the business, but it’s growing more quickly and it has way higher profit margins. These are things like the Apple TV Plus, Music, Fitness Plus, and of course the iOS games, which has been in the news lately.

We’ve been hearing that the lawsuit with Epic Games, we got to learn a little bit more about Apple’s profit margins in that business and some interesting facts there.

Basically, margins are insane for the iOS games and also a small proportion of game players account for a huge amount of the actual earnings. I think they said there’s something like one or two percent of gamers on iOS that spend several thousand dollars a year on their games.

These are obviously high-margin sales for Apple. The services as a whole grew 33% last quarter, and gross margin is 70% of sales compared to about 36% for hardware.

You can see why Apple is excited about growing that services line.

Third, I’m going to be watching the capital allocation. This is fun number to watch. I prefer to watch for many big companies, but Apple is the biggest. It’s even more exciting because the number of zeros behind their capital allocation program is just massive.

They sent $29 billion to shareholders last quarter, and were sitting on $72 billion of cash at the beginning of this quarter. Look for them to announce some head-turning numbers there in terms of capital spending on stock buybacks and what they plan to do with the dividend.

Going into the report, most investors are pretty bullish about this, they were expecting sales to be somewhere around a $120 billion.

I don’t know what that works out to per day, but it’s probably massive for three months compared to the record $111 billion that they did a year ago. Lots of growth, there going to be heading into the holiday season with a huge, probably the most exciting full array of tech products and one of the best consumer economies that they’ve been launching this stuff into for a long time.

This could be a really big record quarter that they’re looking out through. But like I said, Apple likes to under-promise and over-deliver on this regards. I wouldn’t be too concerned if the outlook is a little bit weaker, has a wider range than normal, particularly with this supply chain issues.