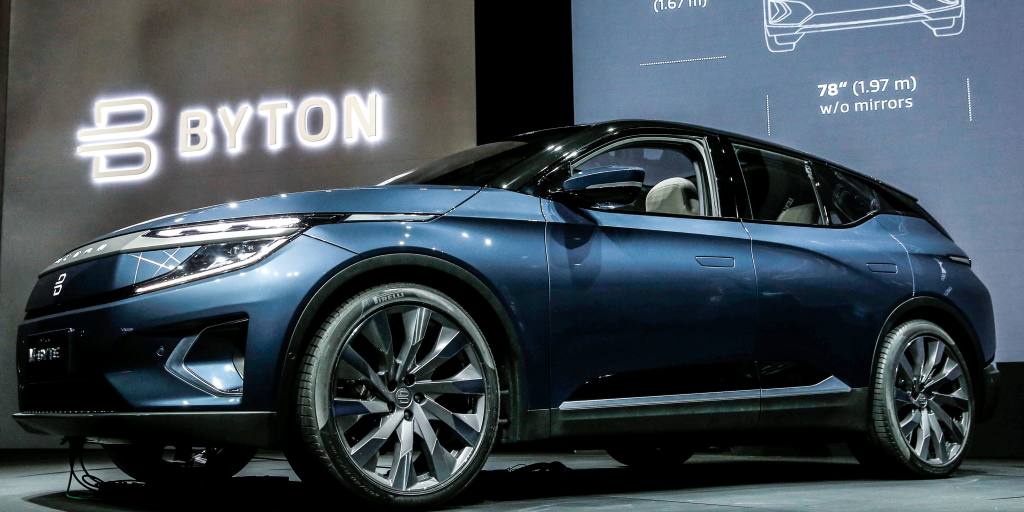 TAIPEI — Foxconn’s electric vehicle collaboration with Chinese startup Byton has been put on hold due to the latter’s worsening financial situation, marking a setback for the Taiwanese iPhone assembler’s automaking ambitions, Nikkei Asia has learned.

Foxconn announced in January that it would help Byton bring its first-ever EV to mass production by the first quarter of 2022. Multiple people familiar with the matter, however, say that the project was halted after less than six months and that the Taiwanese company has since shifted its focus to other ongoing EV projects, such as a joint venture with Thai oil and gas company PTT.

“The [Byton] project is not officially terminated yet, but it is very challenging to proceed at this moment,” one of the people with direct knowledge of the matter told Nikkei Asia.

A few Foxconn employees are still stationed at Byton’s factory, another source said, but “basically they are wrapping things up and preparing for the end when it becomes necessary.” Some higher-level talent involved in the project has even left Foxconn, the person added. “Foxconn’s focus has shifted away from Byton.”

Bloomberg in July reported that the collaboration was affected after one of Byton’s largest creditors took management control of the startup, and that Foxconn pulled out some of its personnel from the project.

Halting the collaboration is likely a disappointment for Foxconn as it attempts to break into the EV business. The joint project was overseen directly by Foxconn Chairman Young Liu, who has made it his mission to shift the iPhone assembler into new growth areas to offset the slowdown in the smartphone industry. Liu, who took over as chairman from founder Terry Gou two years ago, vowed to have Foxconn’s designs, components, mechanical parts or software inside 5% of the world’s EVs by 2025.

Byton, meanwhile, may struggle to deliver its first EVs next year as planned without Foxconn’s support. Founded in 2017 by two former BMW executives, the automaker was once seen as one of the “four dragons” — the most promising EV startups in China — alongside Xpeng Motors, Nio and Li Auto.

When it was announced in January, the Foxconn-Byton project was seen as a win-win arrangement by both sides. Foxconn would give supply chain management and operational support to Byton to let it get its production plans back on track after it suspended operations in July last year due financial difficulties.

In return, Foxconn, which has no experience building cars, would gain manufacturing know-how and begin to build up its EV credentials.

In one positive for Foxconn, any financial impact from halting the project is likely to be small. The company had sent employees and invested administrative resources in the project since January, but had not yet purchased production equipment before it was paused around the end of the June quarter, sources said.

“If it is later canceled, the financial damage would be considered very marginal, as the company has not yet invested big money into the project,” one of the people said.

With the Byton project in limbo, Foxconn has turned its focus to other EV projects, according to sources. The Taiwanese company has inked more than 10 technology development partnerships and supply deals with automakers, software developers and materials providers in the past year and a half, including setting up a joint venture with Stellantis, the world’s fourth-biggest automaker and owner of Fiat and Chrysler, to develop software for connected cars.

Foxconn’s plans to build factories in the U.S. and Thailand to assemble entire vehicles in 2023 are also intact, sources said.

Meanwhile, Foxconn and its subsidiaries are investing resources into research and development for the EV supply chain, with a focus on the three most important areas: batteries, motors and electrical systems.

Foxconn also recently announced plans to acquire a semiconductor facility in Taiwan to gain more control over the supply and development of silicon carbide chips, or SiC chips, which have the high voltage resistance and heat-dissipating qualities needed for EVs. Its Android smartphone assembly arm, FIH Mobile, is developing autonomous driving software and cockpit software, while Shanghai-listed Foxconn Industrial Internet earlier this month spent 378 million yuan ($58.63 million) to buy a 63% stake in Hengdrive, a Chinese developer of advanced motors.

The iPhone assembler is also leading an effort to reshape the traditional automotive supply chain through an open software and hardware platform founded by the company, dubbed the MIH Consortium. The aim is to set industry standards and develop “kits” combining hardware and software that EV makers can use to reduce the time and cost of developing vehicles.

Foxconn is expected to unveil prototypes of EVs, including an electric passenger car, at its annual technology day next month.

Foxconn and Byton did not respond to Nikkei Asia’s request for comment as of publication time.