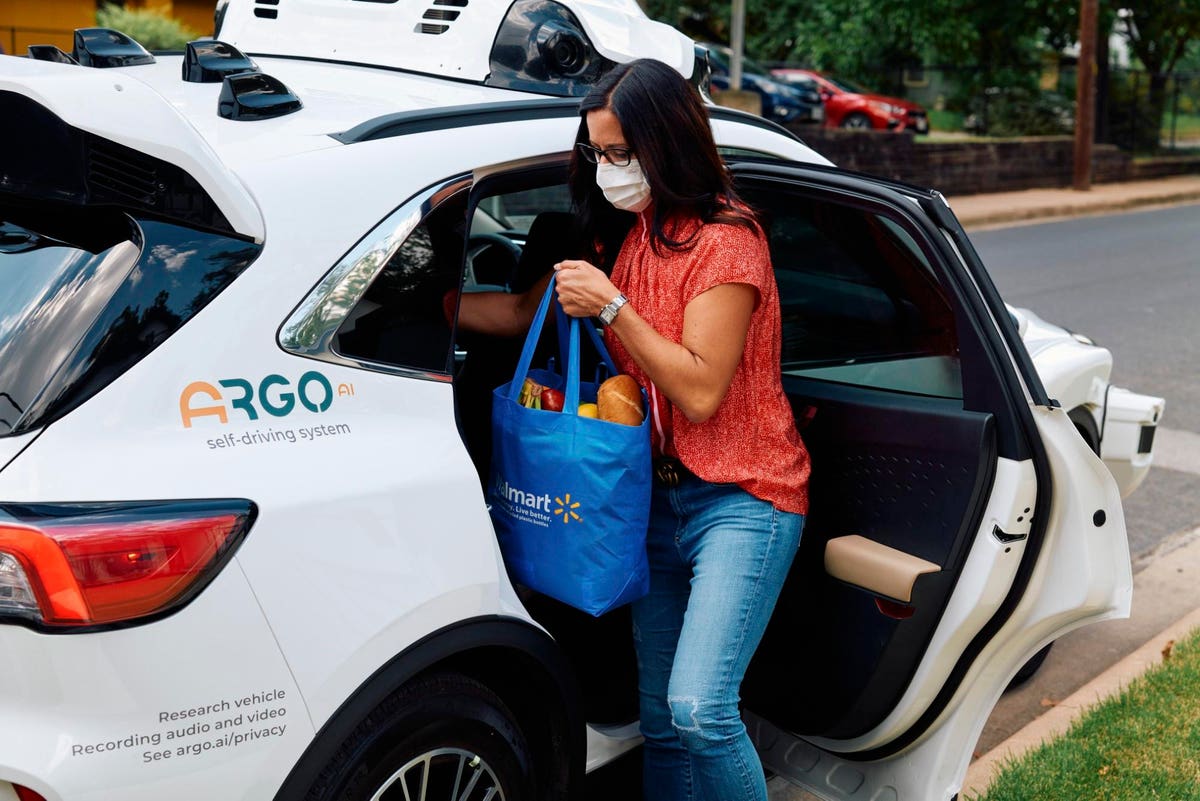 By the end of 2021, Argo AI will begin doing last-mile deliveries for Walmart in Miami, Austin and … [+] Washington DC using a fleet of automated Ford Escape Hybrids
Argo AI

Back in 2017 when Ford and Argo AI first began their automated driving testing program in Miami, they announced several companies that they would be partnering with including Dominos, Lyft and Walmart. The pizza delivery tests began fairly early on but until recently we hadn’t heard much about what was happening with the latter two. In August, Argo announced plans to begin robotaxi pilots with Lyft in Austin and Miami before the end of 2021. Now Argo-powered Ford vehicles will be making deliveries for Walmart in those two cities plus Washington DC later this year.

Among big retailers, Walmart has been one of the most active in pursuing partnerships with companies in the automated driving sector. The Arkansas-based company has already been testing last-mile deliveries in Arizona with both Waymo and Cruise. Earlier this year, Walmart also participated in the latest Cruise funding round. Walmart has also had a partnership with Gatik to do middle-mile deliveries from local micro-distribution centers to stores in both Arkansas and Louisiana.

The Argo/Ford partnership will be the first that Walmart is participating in that covers multiple geographies for last-mile deliveries direct to customers. Walmart will integrate its online ordering platform with the ArgoWatch cloud platform for deployment of automated vehicles (AV). That’s the same platform that Argo has built for deployment of AVs as robotaxis on the Lyft platform that is also launching later this year.

By the end of 2021, Argo AI will begin doing last-mile deliveries for Walmart in Miami, Austin and … [+] Washington DC using a fleet of automated Ford Escape Hybrids
Argo AI

One of the goals of this system is to enable easy integration into the platforms of business partners like Walmart and Lyft. The Argo automated driving technology isn’t planned to be sold on consumer vehicles, but is instead targeted exclusively at commercial applications for carrying passengers and goods. Building a viable business from this technology requires maximizing the utilization of the vehicles.

A robust cloud platform that enables partners to summon vehicles quickly to do a task and then move on can go a long way to achieving that high utilization. ArgoWatch is intended to enable this capability, much like the Uber and Lyft platforms do currently in connecting human drivers with either passengers or businesses that need products delivered. Since Argo is actually going to be the company operating the fleet, the platform also enables the company to monitor the vehicles so that they can be brought in for service, cleaning or fueling as needed.

Argo will be using the same fleet of vehicles for the Lyft and Walmart operations so it’s possible that one of the Ford Escape hybrids could drop off a passenger, be summoned to a nearby Walmart where it will be loaded with an order to deliver and then go to pick up another passenger for a ride. For deliveries, customers placing orders through the Walmart website or app will be notified that an AV is in the area and will make the delivery and that they will have to go out and retrieve their order.

With or without Walmart’s participation in the test cities over the past four years, Argo and Ford have learned a lot about how to build an AV-based business. Among the lessons learned have been how to use the usage data to preposition vehicles at various locations and times of the day where they are likely to see the greatest demand so that wait times are minimized. As part of the validation process, Argo has been running a phantom fleet of vehicles in simulated versions of the cities they operate in including Hamburg and Munich Germany where Argo will soon begin road testing with Volkswagen.

According to Cynthia Kwon, VP of strategy and business development at Argo AI, “more partners are coming.” Argo and Ford have been working extensively with local businesses in Miami and elsewhere to test delivery operations. Making the AV fleet available to as many users as possible will contribute to vehicle utilization. Kwon isn’t committing to any specific timeline at this point, saying that this will be a “phased launch.” As with the Lyft robotaxis, safety operators will remain in the vehicles until enough data has been collected to validate the safety of the automated driving system.

Last mile deliveries probably won’t be the only use case for Argo. Like Gatik, middle mile deliveries between stores and distribution centers are another prime market for AVs. Ford has commercial vehicles that are ideally suited to this use case in the Transit and Transit Connect vans and both seem like likely candidates for automation. In fact something like the next-generation Transit Connect would be a prime candidate to eventually replace the Escape.