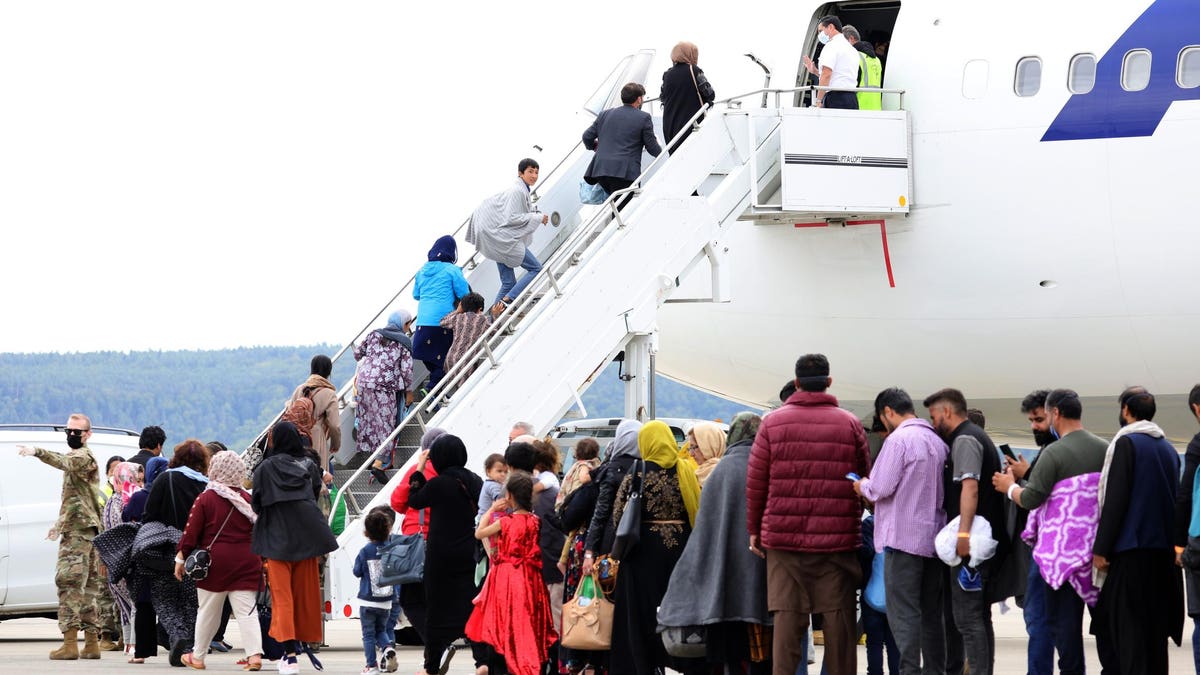 A massive U.S. effort to fly thousands of at-risk Afghans from temporary waypoints in Europe and the Middle East to the United States is on hold for at least a week, the Pentagon said Monday, after several evacuees tested positive for measles after arriving in the U.S.

Evacuees from Afghanistan board a plane bringing them from the Ramstein Air Base in Germany to the … [+] United States on August 26, 2021.
Getty Images

The White House first announced a flight pause on Friday, and Pentagon spokesperson John Kirby said Monday relocation flights to the United States will remain on hold for another week, at the Centers for Disease Control and Prevention’s request.

Five measles infections have been reported so far, Kirby said: Three cases were among evacuees who flew into Dulles International Airport, one was identified at Fort Pickett in Virginia and one case was diagnosed at Fort McCoy in Wisconsin.

U.S. officials are housing people with measles separately and offering medical care, and the CDC is conducting contact tracing, according to Kirby.

Evacuees are required to get vaccinated against measles, White House press secretary Jen Psaki said Friday. Officials are administering measles vaccines to Afghans after they arrive at military bases in the United States, and Psaki said the Biden administration is “exploring measures to vaccinate people while they are still overseas.”

60,000. That’s roughly how many people tied to the Afghan evacuation mission — known as Operation Allies Welcome — had arrived in the United States as of Wednesday, the Department of Homeland Security told multiple media outlets. About 17% of those evacuees were U.S. citizens and residents, and many of the other evacuees worked for the U.S. military or applied for U.S. visas for some other reason, the Associated Press reported. DHS didn’t immediately respond to a request for updated data.

The Taliban toppled the former U.S.-backed Afghan government and took control of Afghanistan’s capital of Kabul last month, regaining power at a faster-than-expected clip as the United States ended its two-decade-long military presence in the country. After the Taliban seized Kabul, the U.S. military held onto Kabul’s international airport for roughly two weeks and ran evacuation flights for U.S. citizens, Afghans who assisted Western forces and others who faced retribution from the fundamentalist militant group. This process was marked by chaos as scores of Afghans pushed for space on outgoing flights, an uneasy security coordination between U.S. officials and Taliban fighters and an Islamic State-linked suicide bombing that killed 13 U.S. troops and more than 100 civilians. Ultimately, more than 120,000 people were flown out of Kabul’s airport, the Biden administration said. Many of these evacuees were temporarily flown to U.S. military installations in Qatar, Germany and other allied countries while they awaited visa processing and flights to the United States.

The Biden administration says it is still working to evacuate U.S. citizens and other at-risk people from Afghanistan, and vowed to hold the Taliban to its public promise to let people leave the country. So far, some U.S. citizens and lawful permanent residents have left Afghanistan via land since the Taliban’s takeover, the State Department said Friday, and several were flown out of Kabul on a pair of Qatar Airways charter flights late last week. Emily Horne, a spokesperson for the National Security Council, called the initial charter flight a “positive first step” and said the Taliban was “businesslike and professional” Thursday.

Flights From Afghanistan Halted Due To Measles Cases On Board (Forbes)