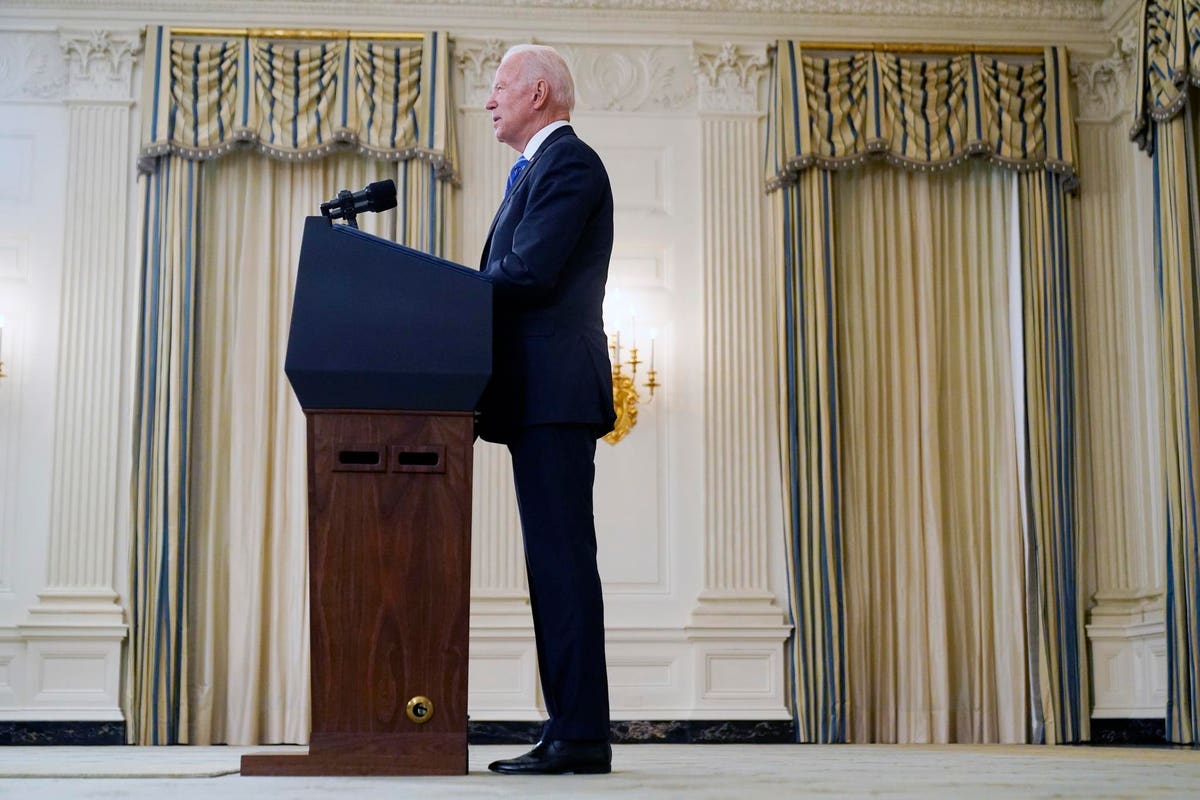 President Joe Biden speaks about the economy and his infrastructure agenda in the State Dining Room … [+] of the White House, in Washington, Monday, July 19th, 2021. (AP Photo/Andrew Harnik)
ASSOCIATED PRESS

President Biden yesterday came out behind the transitory inflation theory stating that “The reality is you can’t flip the global economic light back on and not expect this to happen.”

Of course, his view may be colored by his desire to get various large spending bills passed. If inflation were a problem, then further large spending bills could fuel the fire by creating additional demand for goods and services and pushing up prices. So where do policy-makers and the markets stand on the current bout of inflation?

Inflation is currently at 5.4% for June, that’s the largest 12-month price increase since 2008. Plus, June saw an acceleration compared to prior months. Even if you back out food and energy, which can be volatile, prices are still up 4.5% year-on-year for June. These are high rates of price increases. One of the Fed’s goals is to keep inflation at around 2%. That’s not being met currently, though of course the current economic environment is pretty unique.

The transitory inflation story may be true. Yet, it’s also convenient for a lot of policy-makers. The Fed is looking for around 2% inflation over the medium term in combination with employment goals. Rather than missing their target and having to hike rates, which would likely cause market declines and economic disruption, the transitory inflation narrative gives Fed policy-makers something of a pass. At least for now.

Furthermore, with the markets close to all-time highs and 10-year Treasury bonds yielding 1.2% its certainly not clear that the markets are concerned about inflation currently. In fact, the bond markets may be less concerned than they were back in April as government bond prices have generally risen since then.

However, economist Larry Summers, takes a different view. He is concerned about inflation and has little incentive to sugar coat it. He’s held policy roles in the past, but not currently. He also notes that in the past the markets have been slow to recognize inflation concerns. It’s interesting that its those outside current policy-making roles voicing the most inflation concerns. Given inflation is driven by expectations among other factors, it may serve policy-makers well to try and downplay inflation worries.

It does appear that most policy-makers are expecting just about the most favorable path for inflation from here. Inflation would need to begin slowing in the next few months for their views to prove correct. Even the transitory inflation view does expect inflation to be with us for the rest of 2021 and into 2022. That’s because on the most recent data inflation is actually accelerating.

So, right now there’s scant data, though some theoretical arguments, to support inflation coming down. All we’ve seen to date is prices rises at an accelerating rate across a broad range of goods and services. That’s true even if some of the more extreme commodity price spikes have moderated.

The next few months will be crucial. For example, if low base rates from 2020 are pushing up current inflation, we may start to see deceleration with the August inflation numbers. Many policy-makers and President Biden are calling for a something of a best-case scenario. That’s not to say it won’t happen. However, if we don’t see it in the data over the coming months, then there are clear risks for policy makers and the markets as high inflation regimes can require a different investment approach. Biden’s view may prove correct, but the downside risks for the markets do appear relatively high currently.