California By The Numbers: Why Both Parties Are Losing Today 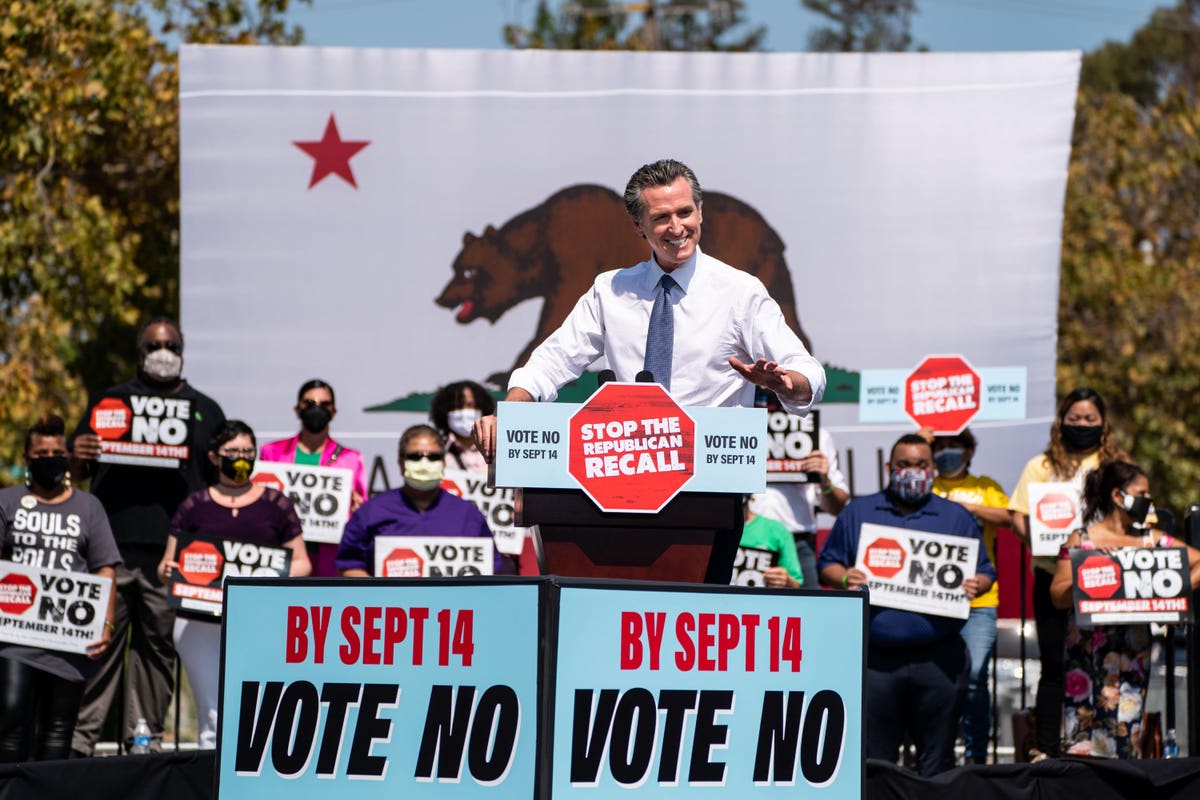 SAN LEANDRO, CA – SEPTEMBER 08: Governor Gavin Newsom speaks ahead of Vice President Kamala Harris … [+] at a rally against the upcoming California gubernatorial recall election at the IBEW-NECA Joint Apprenticeship Training Center on Wednesday, Sept. 8, 2021 in San Leandro, CA. The recall election, which will be held on September 14, 2021, asks voters to respond two questions: whether Newsom, a Democrat, should be recalled from the Office of Governor, and who would succeed Newsom should he be recalled. (Kent Nishimura / Los Angeles Times via Getty Images)
Los Angeles Times via Getty Images

Today, Californians will finish voting on the question of Governor Gavin Newsom’s recall, and finally put this needlessly expensive and undemocratic election behind us. Most voters nationally are blissfully unaware of what this election is costing our country and our democracy. Here’s the quick and dirty run-through of the impact of this election, and why California should rethink its recall laws to prevent such tremendous waste in our political system.

Because of a strange voting system, where candidates only have to win by plurality, not majority, Californians could wind up with a new governor chosen by only 2% of eligible voters. (Another way to think about this–98% of Californian voters would NOT have chosen this new governor).

How does this work? Californians are being asked to cast two votes. The first, is a yes or no as to whether Governor Newsom should be recalled. The second is to vote for his replacement.

There are 46 candidates seeking to replace Newsom, 24 Republican, 9 Democrat, 10 “No Party Preference”, 2 Green Party and 1 Libertarian. Since that candidate only needs to win by a plurality, they could win by just 2.2% of the total vote, regardless of how many people voted.

But that’s still not the full story. Consider who is actually voting. Only an average of 56% of California voters participated in the past four gubernatorial elections (a perhaps generous stat to use given the special nature of this election). And 31% of likely voters have said they plan to vote for or against the recall, but to opt out on choosing a new candidate.

This means that out of 100 eligible California voters, perhaps only 56 are voting, and only 37 plan on naming a candidate. With 46 candidates, that means that if each person chose a different candidate, one candidate getting just 2 votes, or 2% of the vote, could win. And that means in a state with 24.8M eligible voters, just 500,000 people could choose the next Governor.

This is of course an unlikely outcome given the distribution of votes will not be equal across the board. But the fact that it’s even a possible outcome should outrage voters across the political spectrum. This should be more disturbing to more voters, than the tiny fraction of people that had to be outraged in the first place to seek a recall.

Just under 1.5 million signatures were required to force the recall. Current rules state that just 12% of eligible voters can decide to force the state to hold a very costly election. Just how costly?

The California state’s Department of Finance projected the election would cost California $276M. This is a conservative number; the California Association of Clerks and Election Officials put the price tag at $400m. We’ll know the final number soon. But let’s assume, it’s a lot of money.

What else could California do with $400M? California’s “E-Fund” for wildfire emergencies is only $373M, perhaps we could double that. The 500,000 Californians who just lost their $300/month federal supplement to unemployment could’ve had close to three months of additional support. Or we could’ve built 1,008 new affordable housing units across California. The list is endless.

Collectively, with no limits on campaign finance donations in recall elections, Democrats and Republicans spent a collective $128.2M on this campaign; $83M and $45.2M respectively according to the LA Times. (I choose to aggregate these two numbers, as it’s all a collective waste regardless of your political opinion on the matter).

$70M was collected directly by Newsom, which is pretty remarkable given that Newsom had “only” raised $58.2M to get elected in 2018 in the first place, compared to Republican John Cox’s $16.8M. For either party, its a shame these funds weren’t used to support a new slate of candidates, or from the national perspective, more critical elections in purple states.

How to Fix the Recall

So if the current mechanism is broken, how do we fix it? The majority of California voters are in favor of keeping the option of a recall, but they also support making some serious changes to the recall election mechanism. As the Public Policy Institute of California found in their July survey: “86% of California likely voters say that it is a good thing that the California Constitution provides a way to recall the state’s elected officials, such as the governor. Californians are united in their support for the recall option across parties, regions, and demographic groups.”

These voters, however, aren’t in favor of the current recall: “69% of California likely voters say that the special election to recall Governor Newsom is a waste of money.” They recommend the following changes to try to help the state avoid such a waste of time, money and energy in the future:

Make sure there’s a legitimate reason for a recall. “Sixty percent of California likely voters support raising the bar so that an elected official could only be recalled because of illegal or unethical activity.” Notably, this includes 40% of Republicans as well.
Make sure more voters agree: raise the petition requirement to 25% of eligible voters. “Currently, this requirement is set at 12%; that was 900,000 for the 2003 recall election and 1.5 million for the 2021 governor’s recall. Fifty-five percent would support the higher signature requirement, with about half or more in favor across regions and demographic groups.”
Make candidates win fair and square: if a recall goes through, hold a runoff of the top two candidates if no one achieves a majority. The most popular of changes polled, the study found that “On this issue, 68% are in favor, as are a majority of Republicans, Democrats, and independents. Solid majorities across regions and demographic groups want this change.”
Read More