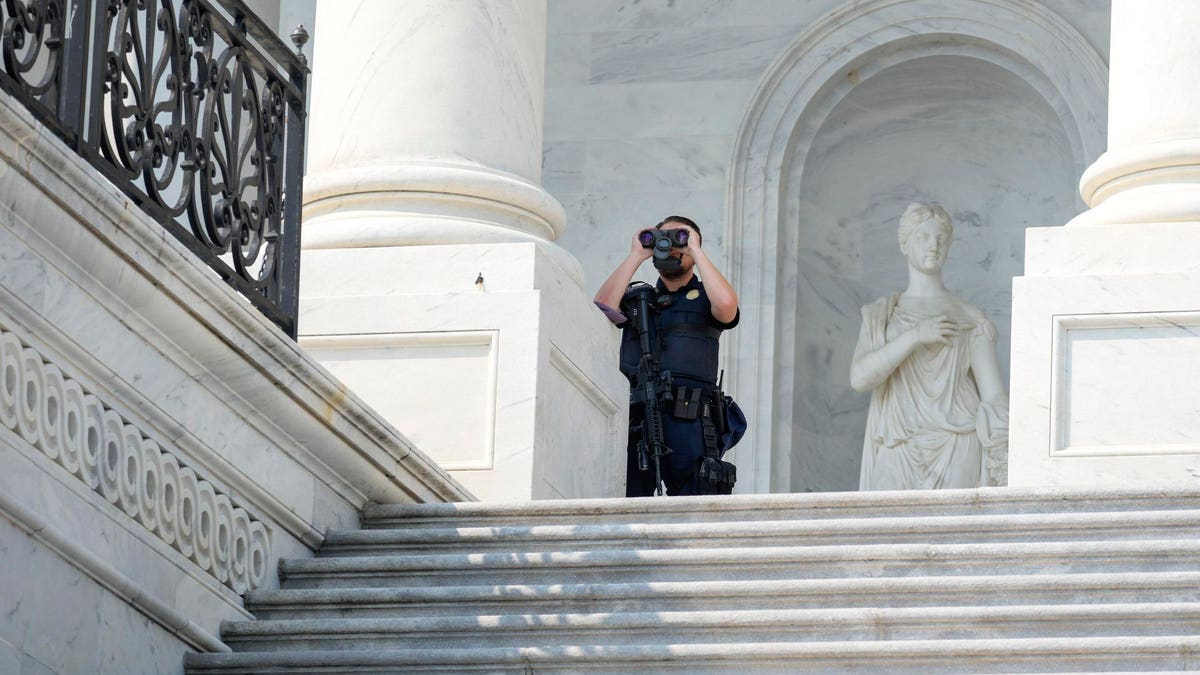 The Department of Defense said Wednesday it is reviewing a request from the Capitol Police for assistance ahead of a rally on Saturday calling for the release of Capitol riot defendants, which some on the Hill fear could devolve into violence.

WASHINGTON, DC – SEPTEMBER 13: A member of the U.S. Capitol Police uses binoculars at his post on … [+] the East Front of the U.S. Capitol on September 13, 2021 in Washington, DC. U.S. Capitol Police Chief J. Thomas told reporters after a classified briefing that temporary fencing around the Capitol Building would go up ahead of the Justice for J6″ rally, which is expected to draw people calling on justice for those arrested after the violent insurrection on January 6th. (Photo by Drew Angerer/Getty Images)
Getty Images

Pentagon spokesperson John Kirby said during a briefing they have received a request “in the form of some manpower support,” adding that it is “not an exorbitant ask” but is still under review.

The Capitol Police said in a statement they have asked the Pentagon ‘for the ability to receive National Guard support should the need arise.”

Melissa Smislova, a top official at the Department of Homeland Security, said around 700 people are expected to attend the Capitol event, with DHS tracking more than a dozen similar events across the country, according to NBC News and CBS News.

While the protest lacks the public blessing of former President Donald Trump that the January 6 event had, and House Republicans who have defended the alleged rioters are expected to steer clear, a Trump-endorsed House candidate, Joe Kent of Washington, is slated to speak.

Capitol security officials are taking the event seriously, with House sergeant-at-arms William Walker telling lawmakers and staff in an alert on Tuesday to avoid the Capitol if possible and use underground tunnels to traverse the campus.

Matt Braynard, the former Trump campaign aide organizing the event, told Forbes he has held similar events in D.C. “without incident” and that he has “fully cooperated” with law enforcement to “ensure this is a safe and productive event.”

“Most demonstrations are lawful gatherings and remain peaceful. However, sometimes peaceful gatherings can become contentious,” Walker wrote in his alert, adding that the Capitol fence is slated to be re-installed as early as Wednesday.

White House press secretary Jen Psaki, asked about the rally during a briefing on Wednesday, said the White House is “obviously always watching and [taking] steps in order to ensure the security of people who work in government,” adding, “We work closely with Congress on that.”

Die hard Trump supporters are expressing skepticism and paranoia about the event on pro-Trump social media forums, according to NBC News. Many wrote that they believe the event is a “honeypot” or “false flag” operation by federal law enforcement to induce them into committing crimes.

Braynard is telling attendants not to bring clothing or signs to the rally that support Trump, tweeting on Tuesday, “This event is 100% about #JusticeforJ6 and not the election or any candidate.” He added, “Anyone not honoring this request will be assumed to be an infiltrator and we will take your picture, find out who you are, and make you famous.”