Cathie Wood Is Selling This High-Flying Stock. Here’s Why You Should Buy It Instead @themotleyfool #stocks $VRTX $CRSP $ARKG 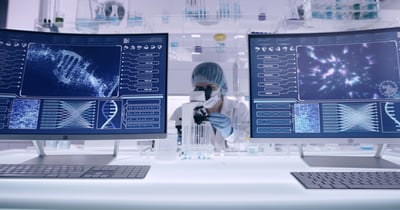 Cathie Wood remains optimistic. Her ARK Invest exchange-traded funds (ETFs) have continued to scoop up stocks during the steep downturn this year.

But she’s apparently not optimistic about all of her ARK holdings. Wood is selling one high-flying stock. Here’s why you should buy it instead.

We don’t know for sure why Wood chose to sell Vertex. Perhaps the most likely reason is that she’s taking some profits off the table after the stock skyrocketed more than 70% year to date.

It should be noted that Wood also owns a significant stake in Vertex’s partner, CRISPR Therapeutics (CRSP -0.78%). The gene-editing biotech ranks as ARKG’s fifth-largest holding. Maybe Wood didn’t see the need to have quite as much money riding on two companies with partially intertwined prospects.

However, one of the smartest maxims of investing is to let winners run. I suspect that Wood could regret her decision to sell those Vertex shares in the not-too-distant future.

What’s on the way for Vertex

Vertex and CRISPR should have great news on the way. The two companies expect to file for European Union and U.K. regulatory approvals of exa-cel in treating sickle cell disease and beta-thalassemia by year-end. A regulatory submission to the U.S. Food and Drug Administration (FDA) is anticipated in the first quarter of 2023.

There’s no such thing as a slam dunk with winning regulatory approvals for new drugs. However, the previous clinical data for exa-cel give plenty of reason for investors to be optimistic. Vertex is already preparing for commercialization.

The company is also planning a marketing strategy for VX-548. Vertex is currently evaluating the drug in treating acute pain in a pivotal late-stage clinical study. VX-548 offers especially great potential as a non-opioid painkiller in the midst of an opioid crisis.

Speaking of CF, Vertex should be able to continue generating growth from its existing CF drugs for years to come. The company thinks that it can secure additional reimbursement agreements and win regulatory approvals for its top drugs in younger age groups. The nearest potential rival is only in phase 2 testing. Meanwhile, Vertex has a triple-combo candidate in late-stage testing that could be its most powerful CF therapy yet.

The biotech’s pipeline also includes three other programs. VX-864 is advancing into phase 2 testing as a treatment for alpha-1 antitrypsin deficiency (AATD). Vertex has another AATD candidate, VX-634, in phase 1 testing. The company has high hopes for its type 1 diabetes program as well, with one phase 1/2 study underway and another waiting in the wings.

Vertex CEO Reshma Kewalramani said in the Q3 conference call that each of the company’s clinical-stage programs “represents a multibillion-dollar opportunity. The CF franchise is already raking in close to $8.9 billion on an annualized basis.

There are also two other big pluses for Vertex. First, the company has a big cash stockpile totaling $9.8 billion. Look for more business development deals and stock buybacks. Second, Vertex’s valuation is attractive considering its tremendous growth prospects. The stock trades at a price-to-earnings-to-growth (PEG) ratio of only 0.42.

Perhaps Wood plans to redeploy ARK Invest’s cash into an even more promising opportunity. However, there aren’t many better stocks to buy right now, in my view, than Vertex Pharmaceuticals.