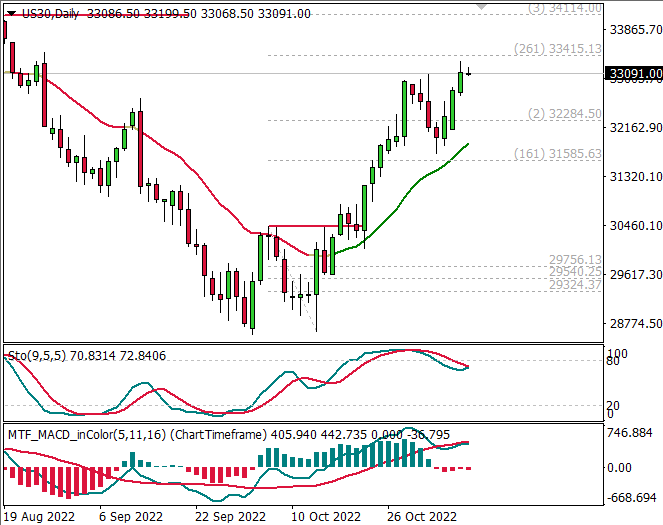 Wall Street ended higher on Tuesday during voting in midterm elections that will determine control of the U.S. Congress, with investors betting on a political stalemate that could prevent major policy changes. The drugmaker Amgen was one of the contributors to Dow Jones, rallying almost 6% to a record high after the company reported positive data related to its cholesterol drug and obesity treatment.
All 435 House of Representative seats and some 35 seats in the Senate are on the ballot. Results of the U.S. midterm elections will decide whether the Democrats lose or retain congressional control halfway through President Joe Biden’s term, with investors expecting Republican gains.
U.S inflation data scheduled for release on Thursday will also be on investors’ mind, with economists forecasting a decline in both the monthly and yearly core numbers to 0.5% and 6.5%, respectively

Asian markets slid on Wednesday morning as investors awaited U.S. inflation data as well as the results of the U.S. midterm elections that could signify a power shift in Washington. Hang Seng index slipped 257 points and Nikkei 225 index dropped 119 points.
Bitcoin fell nearly 1% on Wednesday after sliding 10% following crypto exchange Binance’s announcement that it had signed a nonbinding agreement on Tuesday to acquire rival exchange FTX in the face of an apparent liquidity crunch.

OutlookThis index is going to test its overhead resistance point at 33,415. This resistance is also near to its previous high resistance point. There is potential divergence warning given from MACD. If price unable to penetrate this resistance zone, we are likely to see price retracing to the 20EMA again.

OutlookPrice was capped by the key Fibonacci 62% correction point. It is forming a potential bearish engulfing candlestick pattern and we are likely to see price falling to 15,700. Stochastic is near to overbought zone and MACD is bullish.

OutlookPrice is resisted by the falling 20EMA resistance point. If this index unable to penetrate the 20EMA, we are likely to see price testing its low at 10,605 again. Stochastic is still weak and MACD remains bearish.

OutlookThe price rally was capped by the Fibonacci 62% correction point at 3832. If price unable to penetrate this resistance, we are likely to see price testing its low at 3694 again. Stochastic is falling now.