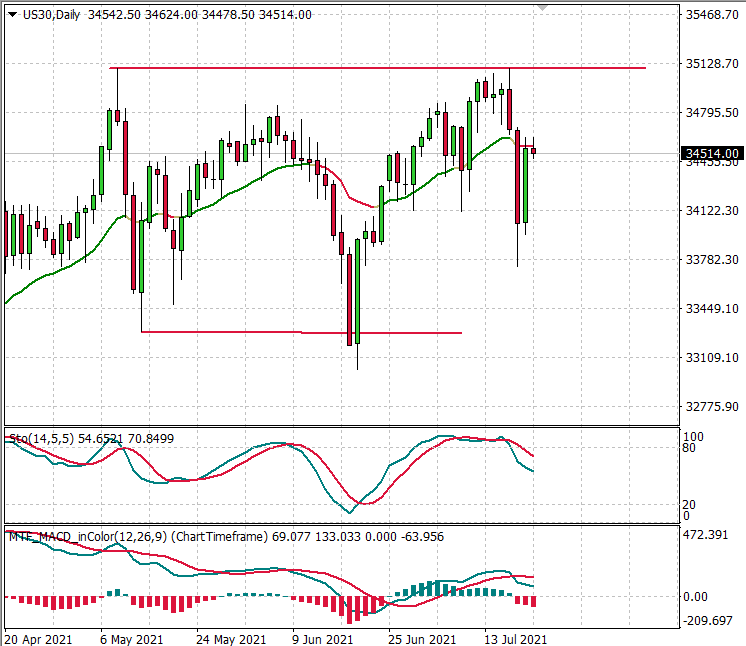 Wall Street ended sharply higher on Tuesday, rebounding from a multi-day losing streak as a string of upbeat earnings reports and revived economic optimism fueled a risk-on rally. All three major U.S. stock indexes gained more than 1% with the blue-chip Dow, on the heels of its worst day in nine months, leading the charge.Benchmark U.S. Treasury yields bounced back from five-month lows, in the wake of their biggest single-session decline since February in the prior session. This helped boost rate-vulnerable banks by 2.6%.Mounting concerns over the highly contagious Delta variant of COVID-19, now responsible for the majority of new infections, have sparked sell-offs in recent sessions as worldwide vaccination efforts gather momentum.

Asia Pacific stocks were mixed on Wednesday morning, with U.S. counterparts recording their biggest advance since March 2021. Hang Seng index fell 73 points while Nikkei 225 index rose 162 points.Oil prices resumed its falls on Wednesday morning after a rebound on Tuesday, with U.S. crude down 0.4% at $66.93 per barrel and Brent at $69.12, down 0.33% on the day.

Outlook
Price hit its previous high last Friday, but closed with a bearish candlestick. It could be a sign of a correction ahead as price may form a potential Double Top chart pattern. Price is currently testing the 20EMA resistance. If it cannot surpass this resistance at 34,560, a decline is likely to follow. Stochastic is falling from the overbought region now. MACD has turned bullish but just had a bearish crossover.

Outlook
This index attempted to move higher but its attempt was halted by the falling 20EMA which is acting as first layer of resistance. We are likely to see a price correction again. Do watch out if price can form a higher low form the base low. Stochastic is falling now and MACD has turned bearish.

Outlook
The price correction could have halted as price is supported by the rising 20EMA support. This could be a sign that the rally can continue if price can hold above the 20EMA. Stochastic is falling from the overbought region now. MACD is still bullish but had a bearish crossover

Outlook
Price has been retracing after reaching a high on 13 July. It managed to stay above the trendline breakout level despite having a one-day violation. It is now moving above the 20EMA and if it can hold above, we are likely to see price testing its high again. Stochastic is falling now. MACD remains bullish.