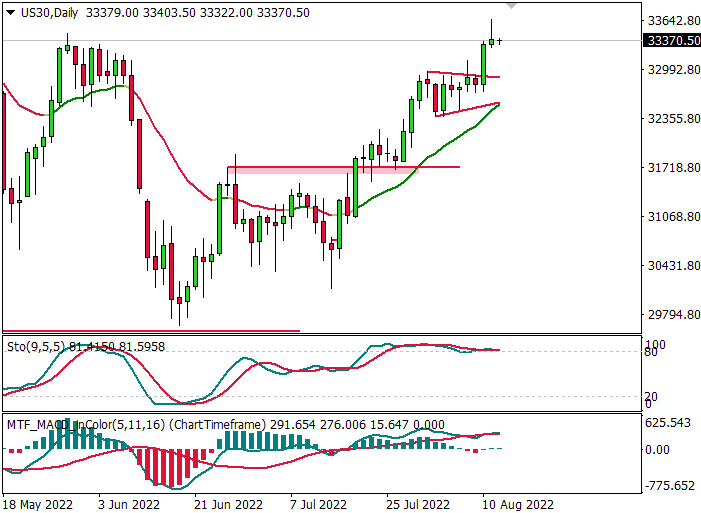 Nasdaq and S&P 500 retreated and closed lower on Thursday on the realization that Fed still needs to aggressively boost interest rates to fully tame rising consumer prices despite fresh evidence of cooling inflation.U.S. producer price index (PPI) unexpectedly fell in July, raising bets in futures markets that the Fed would hike rates by 50 basis points in September instead of 75 basis points as was expected earlier in the week.Benchmark U.S. Treasury yields hit more than two-week highs as bond investors bet the Fed will press on with hiking rates as inflation is still hot, even though price pressures have eased a bit.

Asia-Pacific markets were mostly higher on Friday morning following strong gains in the previous session as investors digested the U.S. inflation report. Hang Seng index rose 48 points and Nikkei 225 index advanced 677 points.Oil prices dipped in early trade on Friday amid uncertainty on the demand outlook based on contrasting views from OPEC and the IEA, but benchmark contracts were headed for weekly gains as recession fears eased.

OutlookPrice formed a Shooting Star candlestick pattern last night after hitting the Fibonacci 62% correction point, which is also near to its recent price high resistance. Both Stochastic and MACD are showing potential divergence warning. Price could retrace to the 20EMA at 32,540 if it could not penetrate this resistance zone.

OutlookPrice rebounded from testing its recent price low support zone, forming a potential Double Bottom chart pattern. Both Stochastic and MACD are showing potential divergence warning. We could see price moving higher to 21,000 if it able to surpass the 20EMA resistance point at 20,300

OutlookPrice is currently trading near to its overhead Fibonacci 62% correction point. A Shooting Star candlestick pattern was formed last night. If price is unable to surpass 13,553, we are likely to see price correcting to 12,860. Stochastic is in the overbought region but MACD remains bullish.

OutlookA Shooting Star candlestick pattern was formed last night after testing its resistance zone. MACD is showing potential divergence warning while Stochastic is in the overbought zone. We are likely to see price retrace to 4085 if it unable to penetrate above the Shooting Star’s high