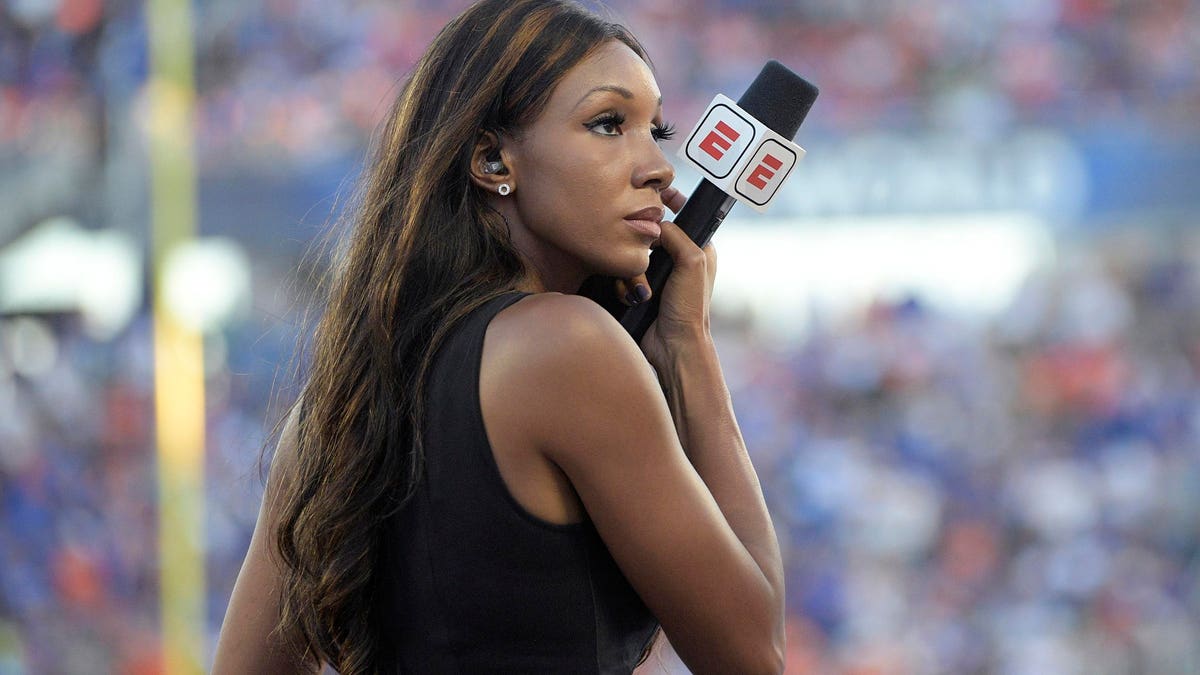 ESPN’s Maria Taylor works from the sideline during the first half of an NCAA college football game … [+] between Miami (FL) and Florida on Aug. 24, 2019, in Orlando, Flaorida. (AP Photo/Phelan M. Ebenhack)
ASSOCIATED PRESS

The network and Taylor said in a joint statement the two could not agree on a contract extension, after her old contract expired on Tuesday, which coincided with the sixth and final game of this year’s NBA Finals.

Taylor hosted this year’s NBA Finals coverage on ESPN–considered a prestigious job in NBA media, and one Nichols hoped to have, saying in a leaked recording she thought Taylor might have been picked for optics.

Taylor is reportedly set to join NBC, where she will serve as a broadcaster for its coverage of the 2020 Tokyo Olympics. The games’ opening ceremony is set for Friday.

“There is no doubt we will miss Maria, but we remain determined to continue to build a deep and skilled talent roster that thoroughly reflects the athletes we cover and the fans we serve,” ESPN President Jimmy Pitaro said.

A leaked audio recording released by The New York Times earlier this month revealed Nichols–who is white–complaining that she thought Taylor was picked over her for diversity reasons. The leaked recording reportedly led to significant tensions within ESPN, especially among its NBA broadcasters, and ESPN went on to pull Nichols from NBA Finals sideline coverage in a last-minute move before the series started earlier this month. Taylor has largely avoided public comments over the controversy, and Nichols told the Times that Taylor hadn’t responded to her apology, a decision Nichols said was “completely fair.” The audio recording of Nichols came from a 2020 conversation she had with LeBron James adviser Adam Mendelsohn, who is also white. Mendelsohn at one point in the conversation said he was “exhausted” by the Black Lives Matter and Me Too movements, which Nichols laughed at in response. Mendelsohn also encouraged Nichols to push back against ESPN’s move to promote Taylor. Nichols has denounced how the recording was obtained, since it only existed because she accidentally left a camera on and an ESPN employee took the recording from the company servers and shared it with others at ESPN. The network has not punished Nichols for making the comments.

The Finals wrapped up on Tuesday with the Milwaukee Bucks defeating the Phoenix Suns 105-98, marking the first championship for the team in 50 years. It was also the first NBA title for the team’s superstar, Giannis Antetokounmpo.