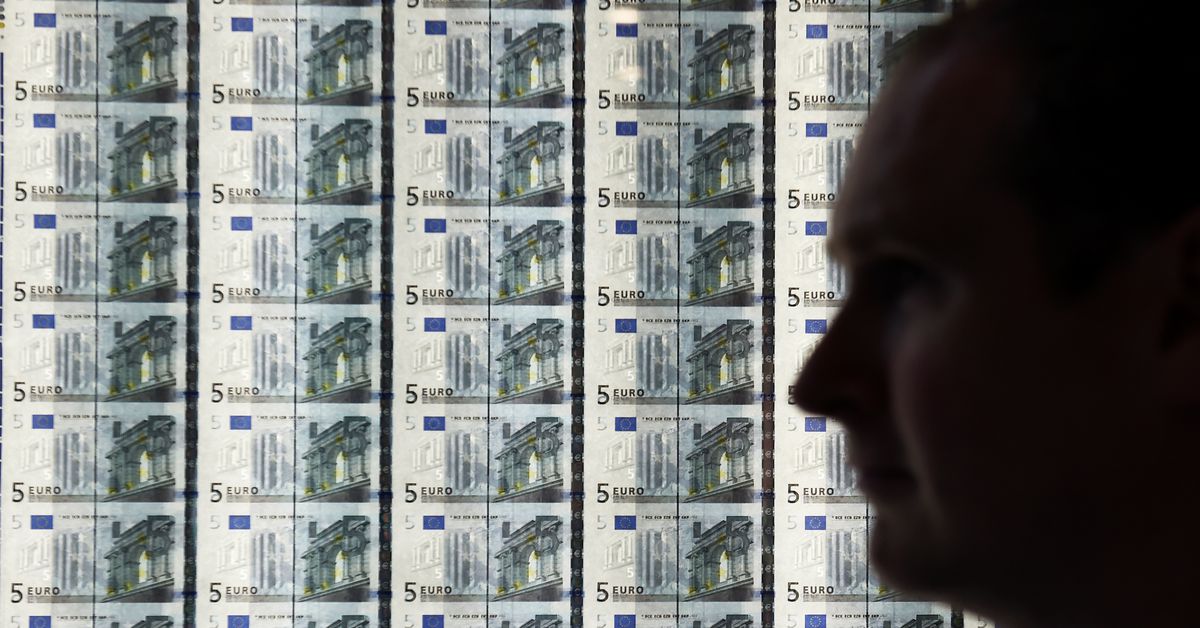 A man is seen in front of a sheet of five Euro notes at the opening of the new Central Bank of Ireland offices in Dublin, Ireland April 24, 2017. REUTERS/Clodagh Kilcoyne

Oct 12 (Reuters) – The European Union launched its first ever green bond to record demand on Tuesday, according to a lead manager, taking its first step to potentially becoming the biggest issuer of environmentally-friendly debt with a record-sized deal.

The 15-year green bond, which will raise 12 billion euros ($13.9 billion), received more than 135 billion euros of demand, a lead manager told Reuters, making it the largest green bond launch and the highest level of demand for a green bond sale to date.

The bond, which will finance member states’ environmentally beneficial projects as part of the bloc’s COVID-19 recovery fund, is the first step for the EU – which aims to be carbon-neutral by 2050 – towards becoming a leading force in the fast-growing green debt market.

Green bonds will fund 30% of the EU’s up to 800 billion euro COVID-19 recovery scheme, which gives grants and loans to members states until end-2026.

Up to 250 billion euros of issuance could transform the EU into the world’s biggest green bond issuer.

Such is the scale of the issuance that analysts at BofA Securities expect the EU will issue 35 billion to 45 billion euros in green bonds every year – equivalent to what all European sovereign and supranational borrowers issued in 2020.

Bram Bos, lead portfolio manager for green bonds at NN Investment Partners, said the scale of issuance from the European Union would increase the liquidity of the green bond market significantly.

“I think the possibility and barriers to start ‘greenifying’ your government portfolios is getting easier and easier with these kinds of issuances from the European Union, which in terms of size is massive,” Bos added.

Tuesday’s bond will price at 8 basis points below the mid-swaps level later on Tuesday, the lead manager said, equal to a yield of around 0.44%, according to Reuters calculations.

Jens Peter Sorensen, chief analyst at Danske Bank in Copenhagen, saw the deal pricing near fair value based on the EU’s outstanding bonds.

Still, that means the EU is paying a lower new issue premium than it usually pays for its bond issues, according to Danske Bank data, suggesting a pricing advantage.

Green bonds tend to price with a “greenium” – a slightly lower yield relative to conventional bonds given a dedicated investor base chasing a limited pool of assets.

“One would have expected because of all of the supply they might have come cheaper, but it shows you how much demand there is for the green bonds,” Sorensen said.

All the green bonds the EU will issue backing the recovery fund will comply with the International Capital Market Association’s green bond principles, seen as the market standard.

They differ from the green bond standards the EU itself has proposed based on its taxonomy of green activities, which are yet to be finalised.

Still, some aspects of the EU’s issuance will go beyond ICMA’s principles. In order for member states’ expenditures to qualify for the green EU funds, investments are required to not cause significant harm to any of the EU’s environmental objectives and member states have to provide details on how they will contribute to their green transitions.