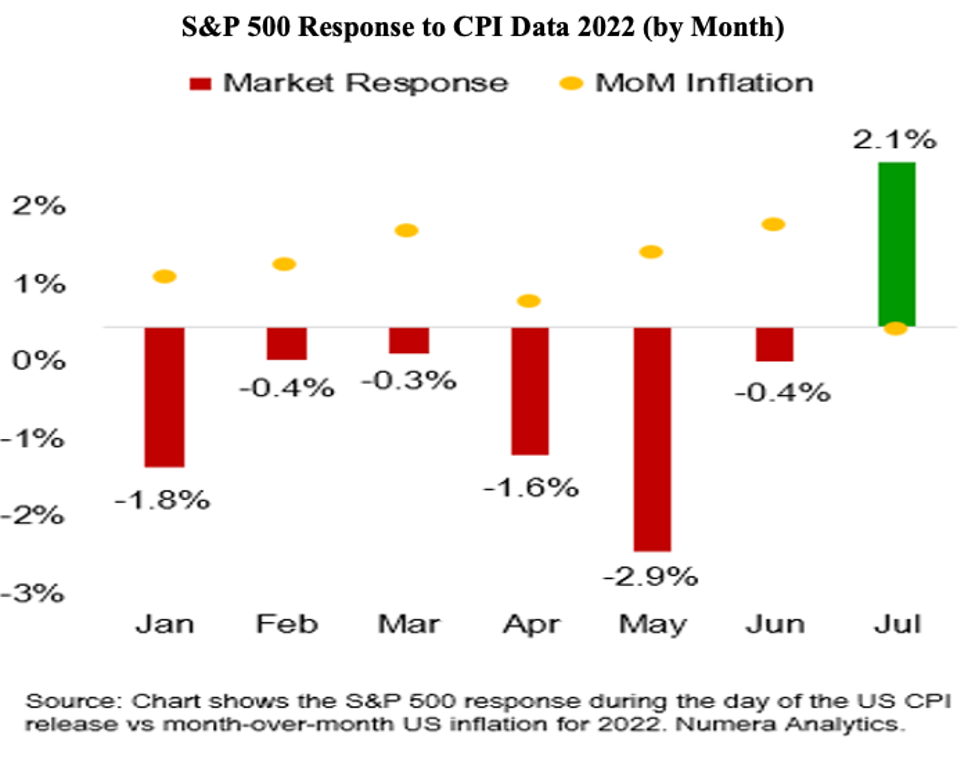 Larry David is most famous for his role in the creation and production of the Seinfeld comedy series. After Seinfeld, David went on to create and star in another such series called Curb Your Enthusiasm. We thought the title of that series is exactly appropriate for what the Fed is telling the markets in the face of this past week’s (ending August 12) very good inflation readings and evidence such readings will continue.

Of course, the markets liked the Consumer Price (CPI) and Producer Price (PPI) Index readings, both of which came in below consensus estimates. The S&P 500 rose 3.2% on the week, the Dow Jones (DJIA), 2.9%, Nasdaq, 3.0%, and the Russell 2000, 4.9%. The table shows that the July/August rally has recovered about half the losses from January through June. “Bear Market” rally?

Digging into the details, in July energy prices fell -4.6% with gasoline prices tumbling -7.7%. Note that gasoline prices have continued to fall since the July price surveys! Food (+1.1%) and rents (+0.5%) continued their ascents, but the forward-looking data say August will show flattening in the two categories. Meanwhile, in July, we saw decreases in the prices of appliances, clothing, airline fares, used cars, rental cars, and in education/communication costs. We expect that the August CPI will show further declines in energy costs (gasoline has fallen an additional -11% as of this writing) and food prices are likely to begin a descent as we are seeing a collapse in agricultural prices, dairy prices and egg and chicken futures.

Rents represent a 30% weight in the CPI, so quite important. As indicated above, they rose +0.5% M/M, equivalent to a +6.2% annualized rate. While not something to write home about, that’s nowhere near the +13.2% Y/Y number that the Fed and the media agonize over. But the +13.2% number is backward looking. As you can see from the chart, this has turned down.

As we have discussed in previous blogs, newly finished multi-family product now entering the market is likely the reason the diffusion index has moved so rapidly from tightness to ease. With the cracks that are now appearing in the homebuilding industry, we are now seeing a move toward lower prices for both new and existing homes. So, the implied Owners’ Equivalent Rent, (OER) imputed by BLS into the CPI, will also soon stabilize.

We have been of the view (expressed many times in this blog) that much of the current inflation was going to be “transitory” if an appropriate time frame was attached, one long enough for the supply chain issues to resolve (i.e., 12-24 months). We now see that the supply chains are mostly healed. One sign of such healing is that shipping rates have fallen dramatically. For example, the cost to move a container from Shanghai to the Port of Los Angeles is around $6,600. A year ago, it was over $18,000 (i.e., a -63% reduction). The voyage now takes 74 days, down from 99.

The two charts below, from the Institute for Supply Management (ISM) Survey, show dramatic reductions in backlog orders and supplier delivery times. They are pretty much back to pre-pandemic 2018 levels, very reliable indicators of the state of the supply chain.

The productivity numbers are awful. They were -7.3% productivity in Q1 and at least -3.5% in Q2. Y/Y productivity is more than -2%, the worse reading since the 1970s. Companies have little choice but to reduce headcount, especially if their sales are stagnant, in order to protect their profit margins. We’ve already begun to see the updrift in the Initial Jobless Claims data.

There is really a lot to be celebrating. It does appear that much of the inflation will disappear as the supply chain heals. Yes! It really was “transitory” after all. The following table assumes just a 0% M/M CPI for the next 12 months and shows what the Y/Y changes in the CPI would be. The forward-looking data says the CPI will “fall” over the coming months (assuming no major geopolitical events), so the table actually could be a worse-case scenario.

CPI changes for the next 12 months

Despite the good news, this Fed appears to have a different view. Every FOMC member that has made a public statement since the release of the CPI has warned that the Fed will be raising rates significantly. The latest FOMC member to make a statement was Mary Daly (San Francisco), normally a dove. She said the FOMC does not want to be “head faked” by improving data and favors a 50 or 75 basis point rate increase for September’s meeting. There are still the August jobs, CPI and PPI reports prior to that meeting. Another 0% reading on CPI would put the Y/Y inflation rate at 8.1% by the time they meet, but that may not be enough progress for this Fed, which appears to be looking at the past (i.e., Y/Y CPI) and driving by looking through the rear-view mirror)!

Furthermore, not only is the Fed intent on raising rates, but it hasn’t yet hit its stride in reducing the monetary aggregates (i.e., Quantitative Tightening (QT)). The economy’s reaction to QT is unchartered since the last time they tried it (2018) they backed away as lending markets froze up. All the forward-looking data says Recession – just a matter of how deep and how long.

We will hear more from the Fed at its Jackson Hole Symposium (August 25-27). Because they are now trying to manage the yield curve, normally the free market’s job, we suspect they will signal markets to move rates higher, not steady or lower as the inflation data have now signaled. Their message to markets: Curb Your Enthusiasm! Too bad! They originally had the right idea (“transitory”), just the wrong timing. Now it looks to be all about appearances – they believe, for their credibility’s sake, that they need to convince the public that they are “inflation fighters” – never mind the economic consequences!

(Joshua Barone contributed to this blog)