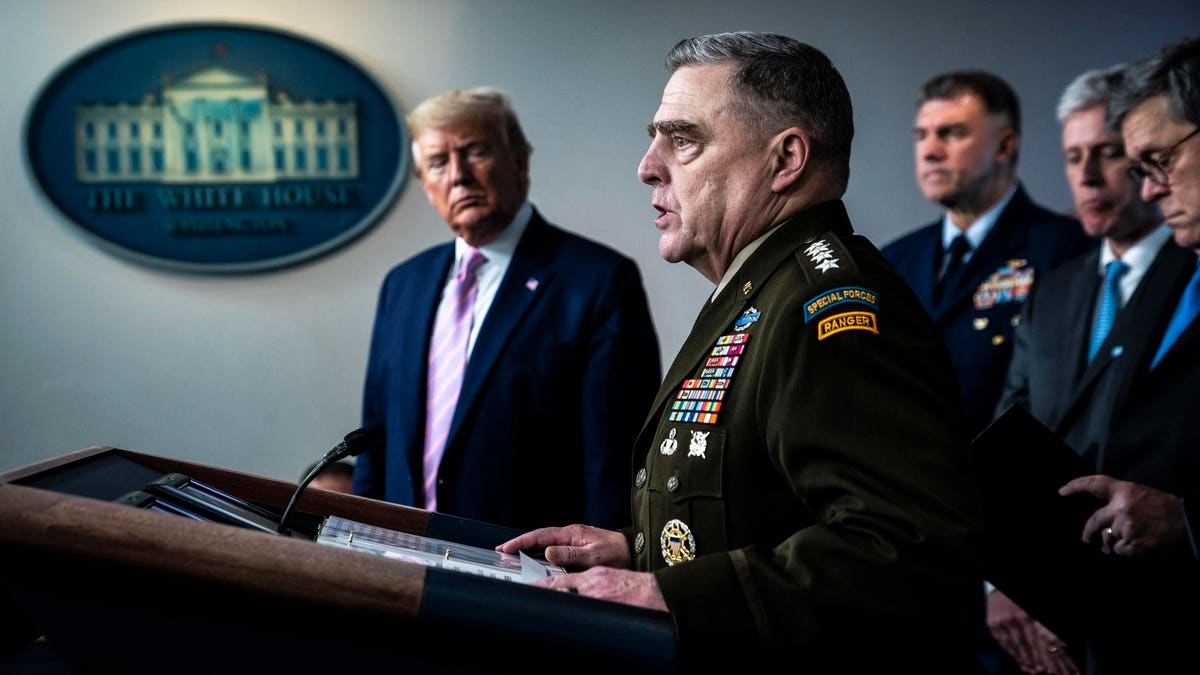 Gen. Mark Milley, the chairman of the Joint Chiefs of Staff, placed roadblocks in front of former President Donald Trump’s ability to launch a nuclear strike as top officials voiced concerns about his mental health after the January 6 attack on the Capitol, according to a book excerpt from reporter Bob Woodward.

WASHINGTON, DC – APRIL 1 : President Donald J. Trump listens to Chairman of the Joint Chiefs General … [+] Mark Milley and members of the coronavirus task force during a briefing in response to the COVID-19 coronavirus pandemic in the James S. Brady Press Briefing Room at the White House on Wednesday, April 01, 2020 in Washington, DC. (Photo by Jabin Botsford/The Washington Post via Getty Images)
The Washington Post via Getty Images

“Milley expressed concerns about Trump’s “trigger point” and told senior military officials they needed his authorization to launch a nuclear strike even if Trump ordered it, according to passages of “Peril,” a book from Woodward and fellow Washington Post reporter Robert Costa, which were reported by CNN.

Milley had received a call from House Speaker Nancy Pelosi – who contemporaneously made public her demands that Milley “[prevent] an unhinged president from using the nuclear codes” – reportedly telling her “I agree with you on everything,” after she said Trump has “been crazy for a long time.”

Milley told a number of top military intelligence intelligence officials, including NSA director Paul Nakasone and CIA Director Gina Haspel, to be on high alert and “aggressively watch everything,” according to the excerpts.

Haspel reportedly expressed severe concerns to Milley, telling him,” We are on the way to a right-wing coup. This whole thing is insanity,” and accusing Trump of “acting out like a six-year-old with a tantrum.”

Milley called his Chinese counterpart, Gen. Li Zuocheng, on January 8 and told him, “We are not going to attack or conduct any kinetic operations against you,” even pledging to call Zuocheng “ahead of time” so a U.S. attack wouldn’t be a “surprise,” according to excerpts of the book reported by the Washington Post.

A Pentagon spokesperson declined to comment – Forbes has reached out to the Joint Chiefs of Staff public affairs office.

Hundreds of Trump’s supporters, emboldened by the ex-president’s baseless election fraud claims, stormed the Capitol on January 6 in an attempt to stop lawmakers from certifying President Joe Biden’s election victory. Trump was widely criticized at the time by lawmakers in both parties for his seeming inaction to quell the violence. According to the book, Trump ignored urgings from his daughter Ivanka and retired Gen Keith Kellogg to intervene to stop the attack and drop his fraud claims.

Trump suggested to Vice President Mike Pence it would be “cool” to have the power to overturn the election after Pence told Trump his role in overseeing the joint session of Congress to certify the election was merely procedural, according to the book excerpts. When Pence persisted, Trump reportedly lashed out and said, “I don’t want to be your friend anymore if you don’t do this.”

“This morning, I spoke to the Chairman of the Joint Chiefs of Staff Mark Milley to discuss available precautions for preventing an unstable president from initiating military hostilities or accessing the launch codes and ordering a nuclear strike,” Pelosi wrote to House Democrats on January 8, vowing to “protect the American people from his unbalanced assault on our country and our democracy.”