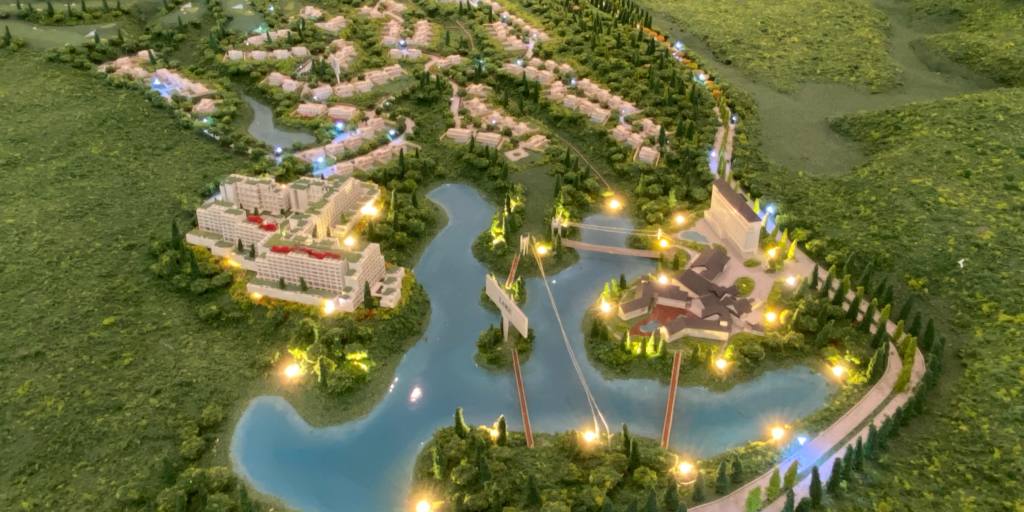 JAKARTA — A project to build one of the largest theme parks in Southeast Asia is underway in the suburbs of Indonesia’s capital.

The huge park is envisioned as a cross between Disneyland and Universal Studios and is scheduled to open in 2024 at the earliest. In addition to the theme park, there are plans to create a large smart city where overseas information technology companies will be invited to set up shop.

Undertaking the project is MNC Group, an emerging conglomerate whose main business is in media.

The project will develop a 3,000-hectare tract in the West Java provincial district of Lido, an hour’s drive from Jakarta. MNC Group has so far secured a 2,000-hectare plot for the project’s first phase. Lido is located 600 meters above sea level and has a milder climate than Jakarta, with temperatures averaging 22-25 C.

The centerpiece of the project is the 47-hectare MNC Park, a theme park complete with a castle and a lagoon that will serve as landmarks, just as with Tokyo Disney Resort, as well as nearly 20 rides, including a roller coaster. A film studio will be built on an adjacent 21-hectare tract and include attractions based on popular movies and dramas.

The site of MNC Park, a theme park planned by Indonesia’s MNC Group in Lido, commands a view of Mt. Salak and Mt. Gede. (Photo by Koya Jibiki)

MNC Park will be the first international theme park to open in Indonesia, according to MNC Group. Combined with the film studio, it will be one of the largest in Southeast Asia. The company consulted experts involved in the design and construction of Disneyland and Universal Studios parks in various locations, including Japan, in designing the park.

MNC Group plans to use its own content rather than signing licensing agreements with Disney or Universal Studios. The group owns four TV stations whose combined audience rating between 6 p.m. and 11 p.m. exceeds 50%. The company plans to use characters from its popular cartoons for the park.

MNC Group is also building a golf course in the same compound that has attracted attention. The course is a joint project with the Trump Organization, managed by the family of former U.S. President Donald Trump. The course, which is scheduled to open late next year, will carry the Trump brand. Pro golfer Ernie Els, who took part in a golf outing with Trump and former Japanese Prime Minister Shinzo Abe, will supervise the design.

The golf course will feature turf imported from the U.S. state of Georgia. MNC hopes to host PGA golf tournaments there. Construction of a six-star hotel and luxury housing units is also underway nearby.

The first phase of construction, including the theme park, the golf course and the hotel, is scheduled for completion in 2027. The total cost of the project is estimated at $2 billion. MNC Group hopes to attract 10 million domestic and overseas visitors a year to the park.

In February, the Indonesian government designated the Lido district as a special economic zone, making the project eligible for preferential tax treatment and other benefits. Taking advantage of this status, the company has begun soliciting foreign investment in the project. It is in talks with a major U.S. IT company about building a data center. MNC hopes to attract a cluster of IT companies to create a technology hub. It also plans to build a university and a hospital nearby.

MNC Group, which opened an online-only bank in June, has been promoting consolidation and digitization among its affiliates. Its ultimate goal is to turn the special economic zone into a smart city where residents can do most of their daily business using the company’s smartphone apps.

However, MNC faces some opposition from local residents over its plan to acquire the remaining land for the project. It will create jobs in the special economic zone and other benefits in exchange for the land, a group executive said.