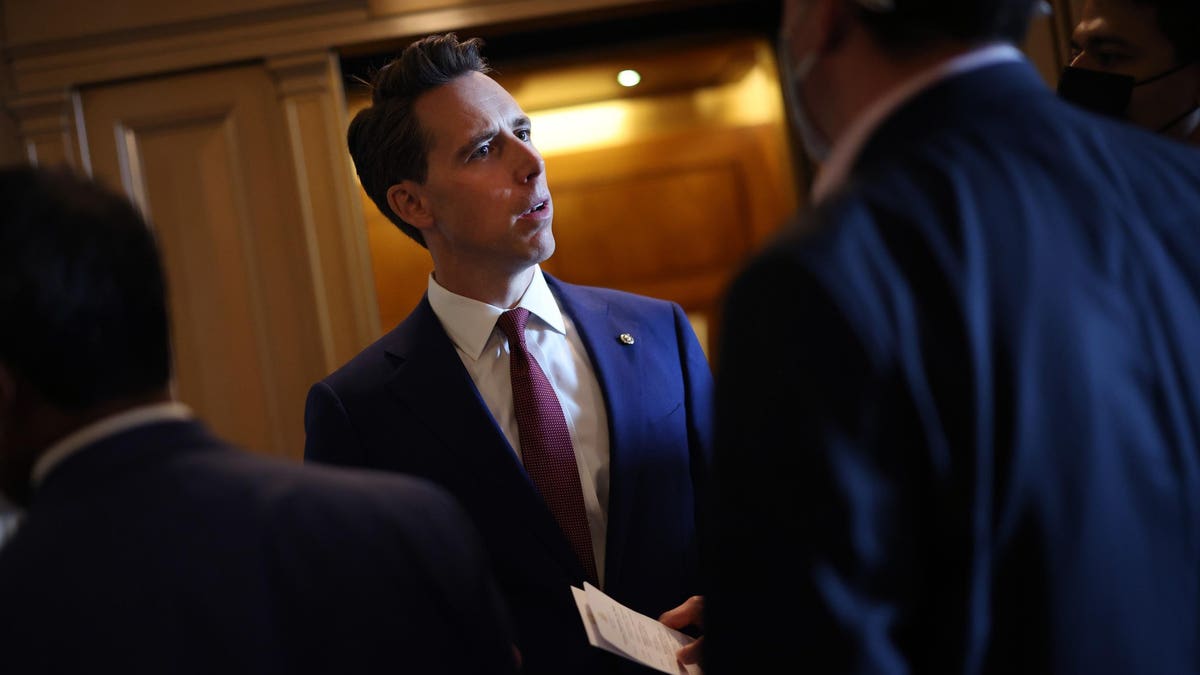 Sen. Josh Hawley (R-Mo.), who has positioned himself as one of President Joe Biden’s most steadfast adversaries in the Senate, said Tuesday he plans to use procedural tactics to slow-walk Biden’s foreign policy nominees unless top officials who oversaw the U.S. withdrawal from Afghanistan resign.

WASHINGTON, DC – SEPTEMBER 14: Sen. Josh Hawley (R-MO) talks to reporters prior to a Republican … [+] policy luncheon at the U.S. Capitol on September 14, 2021 in Washington, DC. Congress is working on a final passage of the $3.5 trillion reconciliation package. (Photo by Kevin Dietsch/Getty Images)
Getty Images

Hawley said in a floor speech he will object to confirming nominees for State Department and Defense Department posts by unanimous consent unless Secretary of State Antony Blinken, Secretary of Defense Lloyd Austin and National Security Adviser Jake Sullivan resign.

Hawley said the three officials should “take responsibility for their failures,” pointing to the deaths of 13 U.S. service members in an attack in Kabul last month, and the fact that some Americans remained in the country when U.S. troops pulled out.

While the tactic wouldn’t be enough to block nominees who have support from a majority of senators, it would force multiple votes to confirm each one rather than allowing them to be swiftly confirmed by voice votes, exacerbating a logjam of confirmation votes.

Hawley told CNN his plans extend to “every single civilian nominee” at the departments, as well as ambassadors, compounding headaches for the White House, which has already expressed frustration at the Senate’s slow pace in confirming ambassadors.

The pledge came as Sen. Bob Menendez (D-N.J.), the chair of the Senate Foreign Relations Committee, railed against Austin for failure to appear before his panel alongside Blinken on Tuesday, adding that it may color his view of Pentagon nominees.

Forbes has reached out to the White House for comment.

Hawley has been one of the Senate’s most consistent opponents of confirming Biden nominees, voting against all 15 of the president’s cabinet secretaries earlier this year. He told Forbes at the time he votes for nominees who will “be good for the people of Missouri,” and that he had been “really disappointed” with Biden’s nominees.

Hawley’s crusade for the resignations of top Biden officials comes as dozens of Republicans, including Hawley, have called for Biden himself to resign. Asked by Forbes on Tuesday about an upcoming protest outside the Capitol, Hawley pivoted to a critique of Biden that ended, “This president has failed… and it’s time for him to resign.”

Menendez told CNN he wouldn’t go as far as Hawley despite his frustrations with the Biden administration over Afghanistan, arguing Hawley’shis move “would undermine U.S. national security and its interests,” adding sarcastically, “That would be a brilliant idea on behalf of Sen. Hawley.”