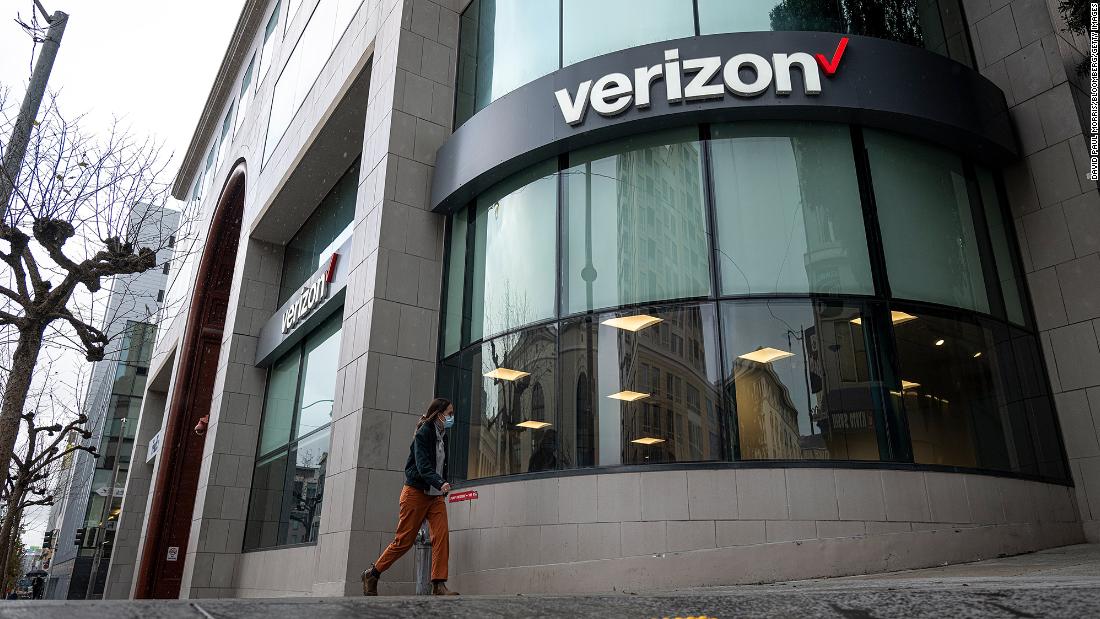 share this article!
Overall, the Dow is up about 16% in 2021, making Verizon’s underperformance really stand out. (Biotech Amgen (AMGN), another Dow component, is also down nearly 10% this year.)
Even though profits were better than expected and shares rose about 2% Wednesday, Verizon may still find it difficult to excite Wall Street much longer. Sales growth remains sluggish and the company’s revenues grew just 4% from a year ago, missing estimates.
Verizon (VZ) is stuck in a highly competitive wireless business where companies have to fight for subscribers and often have to resort to low prices to attract users.
It doesn’t help that many consumers are increasingly content to hold on to older phones for longer periods of time before upgrading — even as Apple (AAPL), Samsung (SSNLF) and others keep churning out new models.
Read More
As such, Verizon isn’t the only telecom that’s struggling. Rivals AT&T (T) (which owns CNN’s parent company, WarnerMedia) and T-Mobile (TMUS) are languishing this year too. Both stocks are down more than 11% in 2021.
Despite the fact that there are now only three major wireless carriers following T-Mobile’s merger with Sprint, competition remains intense.
“There is, of course, a little bit more competitive landscape right now,” said Verizon CEO Hans Vestberg during a conference call with analysts Wednesday. But Vestberg stressed that Verizon is adding “high-quality customers” — code for users who are signing up for pricier plans.
Still, Vestberg conceded that the company won’t be getting rid of its generous deals and promotions to attract new users.
“We have been going back and forth on our promos,” he said during Wednesday’s call. “Right now, we feel very good about how we compete in the market. So we’re always going to have promos when we think it’s the right timing of it.”
Investors may not like the sound of that — even if it is music to customers’ ears. Verizon is also now spending aggressively to upgrade its networks.
Wireless companies shelled out billions of dollars to fix this 5G problem
Vestberg said during an investor presentation in March that the company paid a whopping $52.9 billion at recent Federal Communications Commission wireless spectrum auctions to boost its 5G presence.
Still, Verizon is making a clear bet that having what it hopes will be the fastest and best 5G network is the key to success. The company, under Vestberg, decided to ditch the content business.
Verizon sold off its media division, the unit formerly known as Oath that included AOL and Yahoo, to private equity titan Apollo (APO) for $5 billion in September.
Verizon is retaining a 10% stake in that business though, and Vestberg described the decision to scale back on media as a “strategy refinement” during Wednesday’s call.
That move still may not be enough to win back Wall Street as Verizon is also being hurt by macroeconomic conditions that are out of its control.
Long-term bond yields have been rising this year as the economy has improved and the Federal Reserve has signaled plans to cut back on, or taper, its massive asset purchase program.
With the 10-year Treasury now yielding about 1.63%, up from 0.92% at the end of 2020, Verizon’s dividend yield of 4.9% isn’t as attractive to conservative investors as it once was. Bonds are now more compelling, especially since many investors expect the Fed will hike interest rates next year.
That makes Verizon less interesting to investors who might have only been buying the stock for its big dividend yield while willing to overlook its sluggish growth.
Rising rates also could hurt Verizon because it will make it more expensive to pay interest on its ginormous pile of debt. Verizon said Wednesday that although it reduced its debt load by $5.2 billion in the third quarter, it still has $131.6 billion in net unsecured debt on its books.