Sembcorp Marine Ltd. has agreed to combine with Keppel Corp.’s division in a transaction that would establish the world’s largest builder of oil rigs and push the firm deeper into renewables and alternative energy solutions on April 27, 2022.

The deal was completed nearly a year after the Singapore-listed firms stated in June 2021 that they were considering the prospect of merging their offshore and marine engineering (O&M) operations in order to take advantage of the move to cleaner and renewable energy sources.

Temasek will own 33.5 percent of the merged business when the transaction is completed, which is subject to shareholder and regulatory clearance. Temasek will not vote on the agreement. Keppel O&M would sell its legacy oil rigs business and associated receivables into a new corporation that will be held by investors including Keppel Corp and a Temasek affiliate as part of the arrangement.

Singapore’s yards were among the worst-affected in the world, since the epidemic made it impossible to recruit competent workers from abroad owing to rigorous Covid-19 border regulations. After putting aside allowances for labor-related charges and costs relating to current projects that were delayed owing to Covid, Sembcorp Marine posted its worst loss since at least 1990 last year.

Years of oversupply, oil price instability, and a decline in new orders have battered the loss-making oil rig manufacturers.

The worldwide move to renewable energy, consolidation at Chinese and South Korean rivals, and huge interruptions during the COVID-19 epidemic, when oil prices collapsed, have all worsened these problems.

Ship and rig builders across the world have been reorganizing to stay afloat after orders fell in 2014 due to lower crude oil prices. As oil companies such as Shell Plc and Exxon Mobil Corp. cut expenditure on drilling and other offshore equipment, tens of thousands of jobs have been lost and shipyards have closed.

The merged firms’ shift to greener energy sector is projected to boost their order book in the next years, which stood at S$6.4 billion in 2021. According to the corporations, global investments in offshore renewable and cleaner energy solutions would top S$500 billion between 2021 and 2030, citing market analysis from a renowned consultancy.

The slump heightened competitiveness for a diminishing pool of projects, driving up sector debt levels and prompting Sembmarine to raise S$3.6 billion in equity during the last two years, with significant support from Singapore state investor Temasek (TEM.UL).

For years, analysts have advocated for industry consolidation. In 2020, Sembmarine separated from its parent company, Sembcorp Industries (SCIL.SI), paving the path for the Keppel acquisition.

Sembmarine and Keppel corporation own and operate shipyards in Singapore and abroad, employing almost 20,000 workers in total.

Adrian Loh of UOB Kay Hian kept his “buy” rating with a higher target price of $7.25 from $6.94, citing Keppel’s revenue for the first quarter of FY2022 being broadly in line with his estimate at 21% of his full-year expectation. The excellent quarter, he believes, bodes well for the group’s performance in FY2022.

Lim Siew Khee, a CGS-CIMB Research analyst, has reiterated her “add” rating on Keppel Corporation because she anticipates the group’s approach paying off gradually. Her target price of $7.20 remains unchanged.

Lim believes that the fall in house sales in China and Vietnam would reverse as additional projects are set to start in the next quarters, despite the reduced revenue for Keppel’s urban development business.

Keppel’s massive landbank of [about] 5 million sqm is kept at a reasonable cost, she continued. Half of this is still under development, with the RNAV being unlocked gradually over the next three to five years. Thirty percent of the undeveloped landbank is reserved for Tianjin Eco-city initiatives, which is not represented in our RNAV.

She also points out that Keppel corporation’s stock has performed strongly, with a 26 percent gain since end-January following a great set of results for the fiscal year ending in December. According to Ho, this was supplemented by a hefty dividend and share repurchase program.

Finally, PhillipCapital analyst Terence Chua has maintained his “buy” rating on Keppel corporation with a $7.07 target price. According to him, Keppel’s 1QFY2022 revenue was 23.5 percent below his FY2022 predictions, with the Urban Development division being the drag.

In summary, accretive acquisitions in the area at appropriate valuation multiples, successful monetisations of undervalued assets, and recovery in property prices in major markets Singapore, China, and Vietnam are all potential catalysts for Keppel Corp.

Potential risks, on the other hand, include macroeconomic degradation, acquisition risks, government rules & policies that may have an influence on the property market, acquisition & integration risks, and execution glitches.

what the chart says about Keppel Corporation 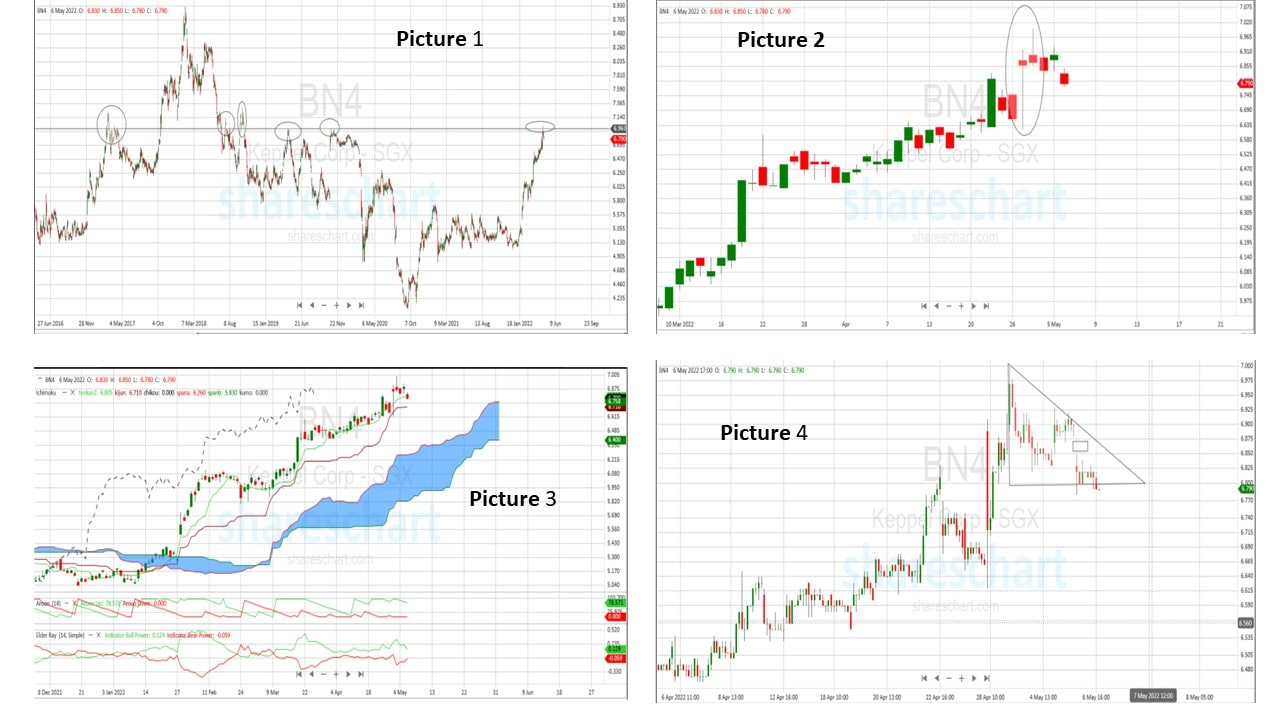 Also in picture 2, there is not one but two “obvious long tailed Doji candles” that appeared 4 and 5 bars ago. Since then, the price has yet to move above that level. This is another obvious sign of an overbought condition.

Although the chart is overbought in the short term, we cannot assume that it has become bearish. As shown in picture 3, the Ichimoku indicator shows that the uptrend is still very intact and there are no signs of a dead cross. The Aaron indicator and the Elder Ray indicator also show no signs that the uptrend is in danger. As can be seen on the chart, the red lines of both indicators are well below the green lines of the indicators. The upward trend is therefore intact.

So we have to turn to a lower time frame to see the short-term movement of the stock. On the hourly chart on picture 4, we have spotted a Triangle Top Reversal Pattern in Keppel Corp. Also, the price formed a “gap down” at the start of trading on May 6. This bearish set-up could potentially cause Keppel corporation’s price to fall in the short term. 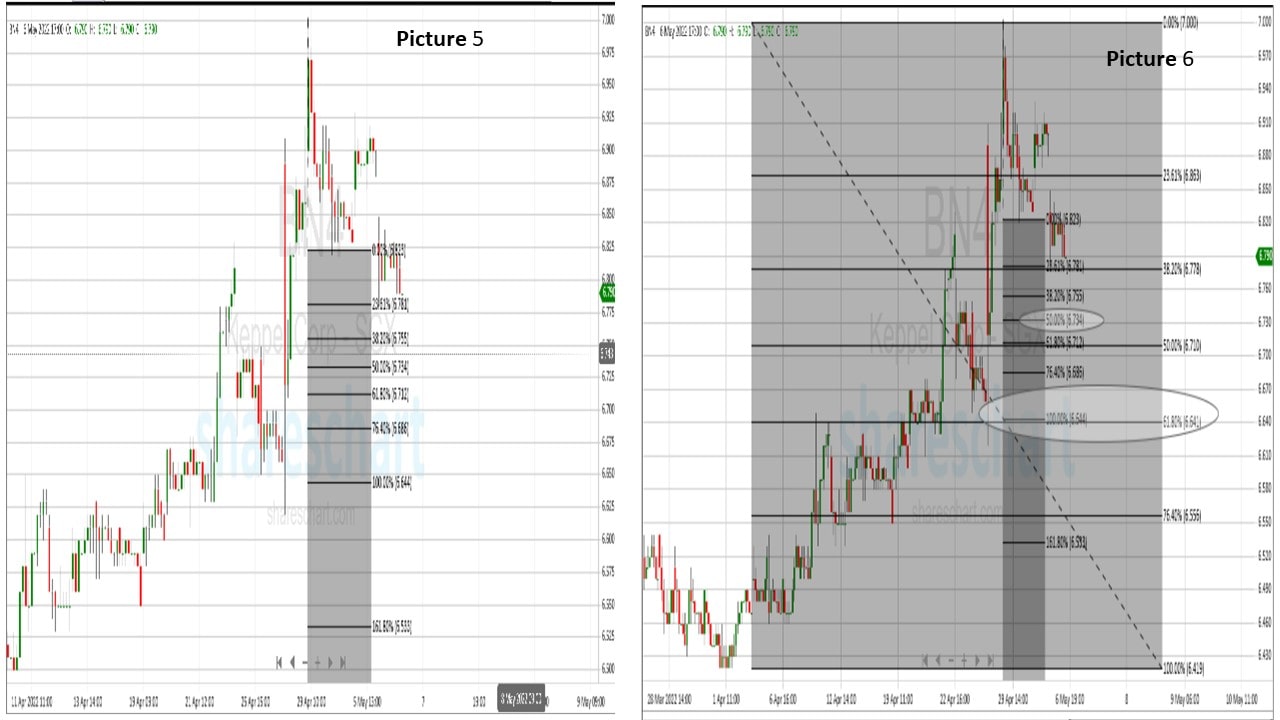 If Keppel corporation’s price successfully breaks out of the triangle, the next support could be at $6.8, followed by $6.65. The price target is derived by measuring the apex of the triangle to its neckline and projecting the same distance down from the neckline of the triangle.

Furthermore, if we perform a Fibonacci retracement from the high to the low of the trend since April 1 as shown on picture 6, we find that the 61.8% retracement point coincides with the projection level of the triangle of 100% (see above). It is therefore likely that the price of Keppel Crop will fall to at least $6.65 in the short term. In the longer term, Keppel corporation’s share price could even fall to $6.5 and beyond. For traders interested in buying this stock, it pays to be more patient and wait for a lower price.

As its real estate and asset management sectors remained robust, Keppel Corp’s conglomerate structure served to insulate it from the brunt of the pandemic’s consequences. With oil prices continuing to climb, Keppel Corp may gain in the coming year. Given the analysis above, It is definitely worthwhile to include Keppel corp in your watchlist and wait for the next retreat in price to enter. As Charlie Munger once said, “the big money is not in the buying and selling, but in the waiting.”