Is CVS Health Corporation a buy or a sell?

Is CVS Health Corporation a buy or a sell?

CVS Health Corporation (CVS) is a drugstore company established in the United States providing other services across the healthcare system. Investors should be positive on the company because of its strong fundamentals, which might help it thrive in a risk-averse climate.

CVS’ financial performance in Q4 2021 was strong, but its stock has remained sluggish since the reports were released, owing to disappointing 2022 management outlook. It’s simple to understand CVS’s desirability as an investment opportunity if one ignores the company’s mediocre 2022 projection and concentrates on the company’s strong medium-term bottom line growth objective. This is particularly relevant when considering CVS Health’s comparatively low-teens projected P/E multiples.

First, let’s look at the technical aspect of the stock. 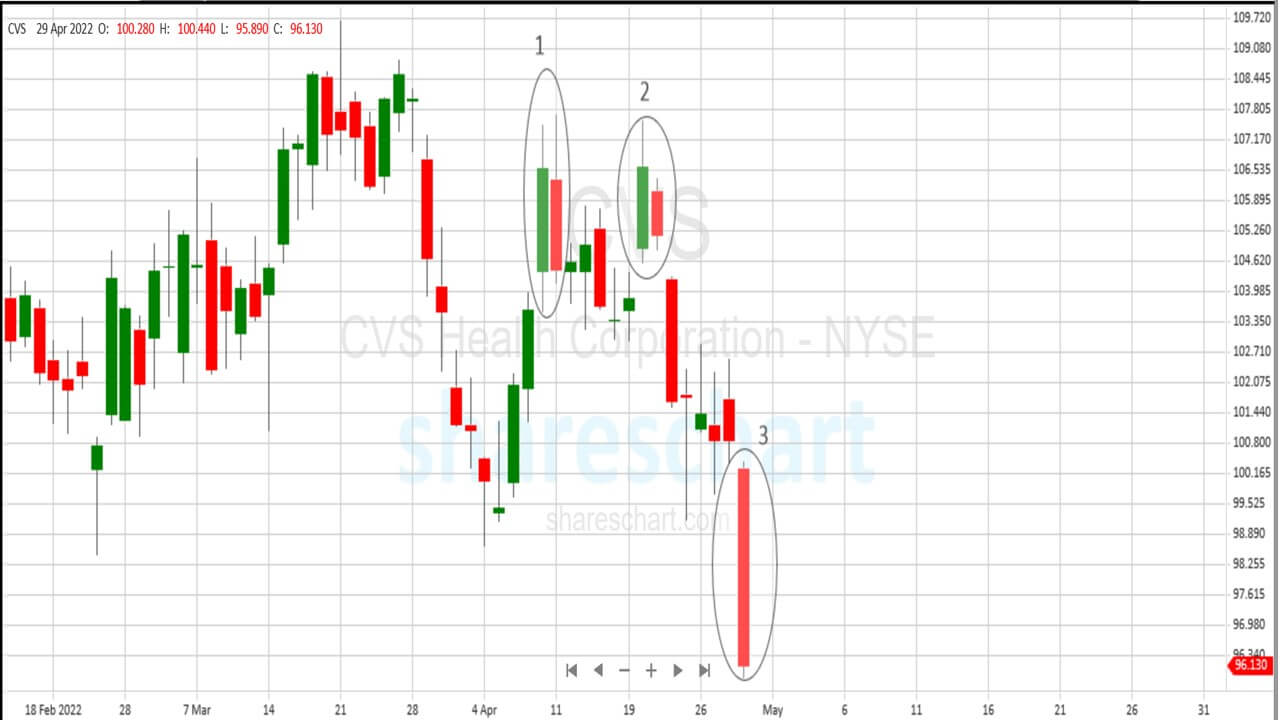 On April 29, the Shareandstocks candlestick scanner detected a bearish signal on this stock – CVS Health Corporation. On that day, a “big black bar” was formed (point 1). This is one of the most bearish signs in the candlestick study. It is a sign that the price opened high and closed low that day. It shows that the selling forces outweighed the buying forces at the end of the trading day.

The 3 bearish candlestick patterns signal that the chart of CVS Health Corporation stock has triggered a downtrend. 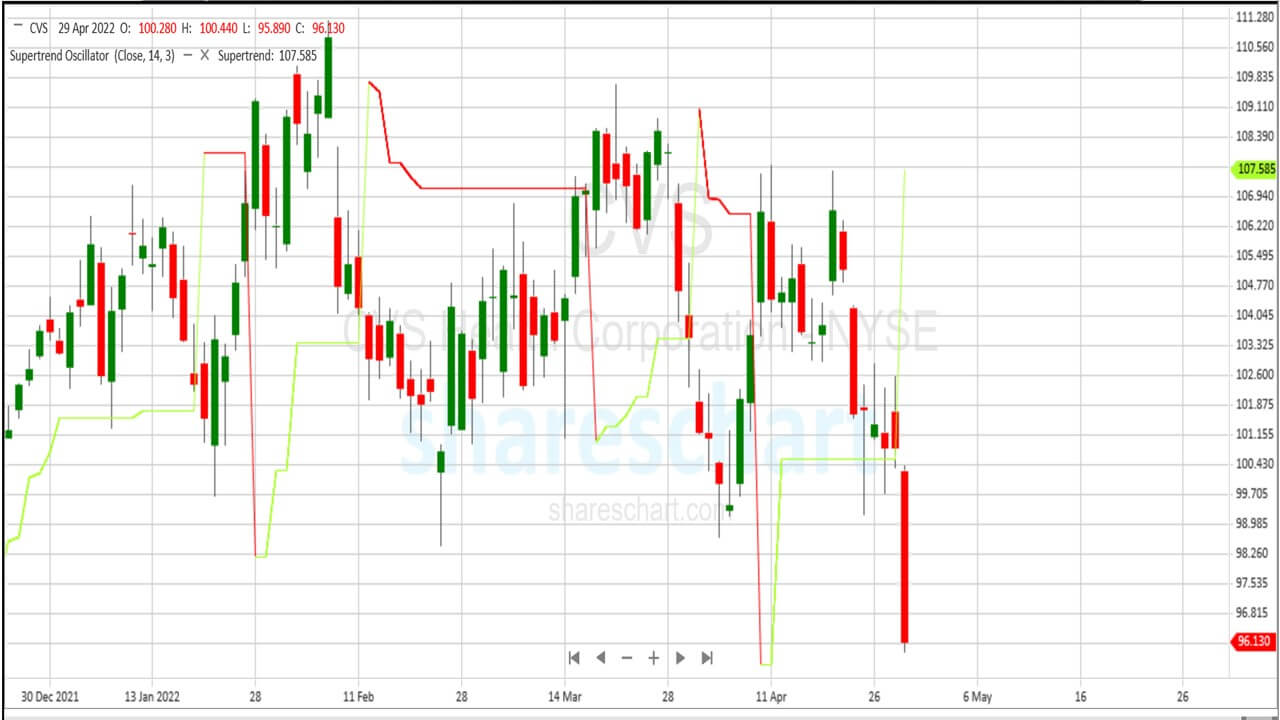 On April 29, the price had also broken through the “super trend” indicator. The dead cross is another sign that the share is turning into the downtrend.

On the daily chart, the price has broken below the “Supertrend” indicator. This is a bearish sign. 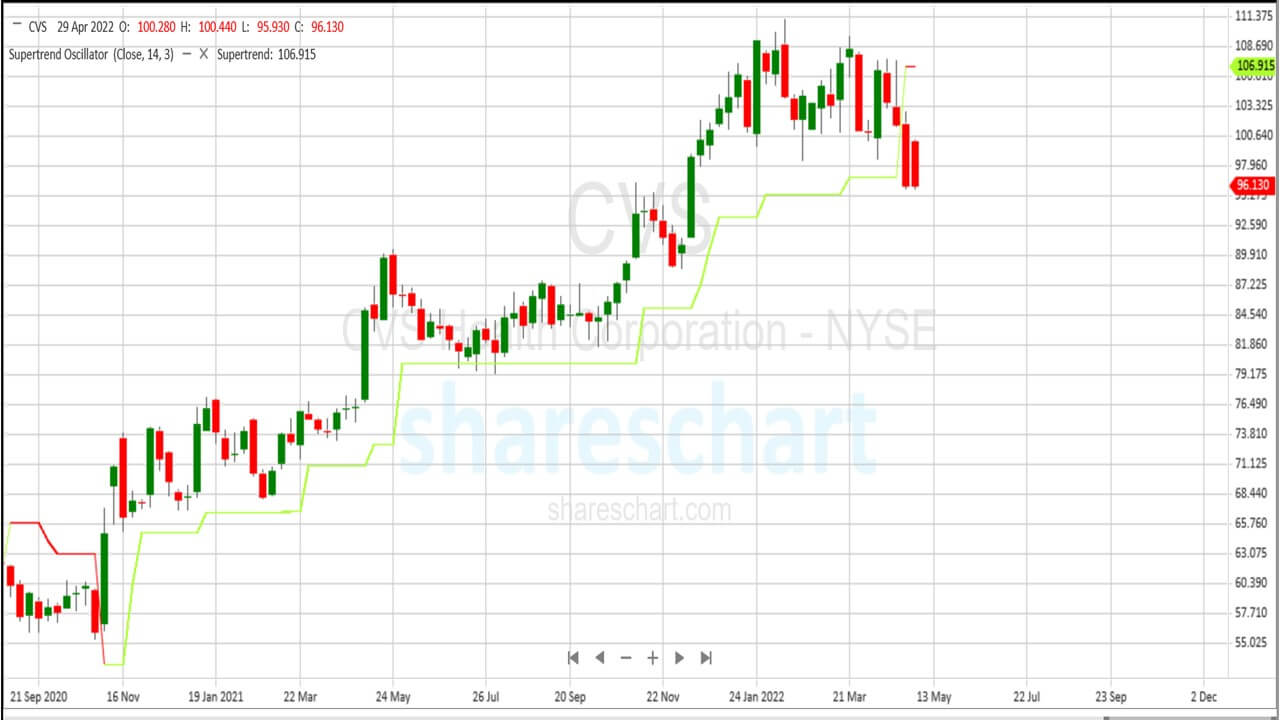 Similarly, the price has also fallen below the Supertrend indicator on the weekly chart. This shows that the long-term trend of the chart is also bearish. 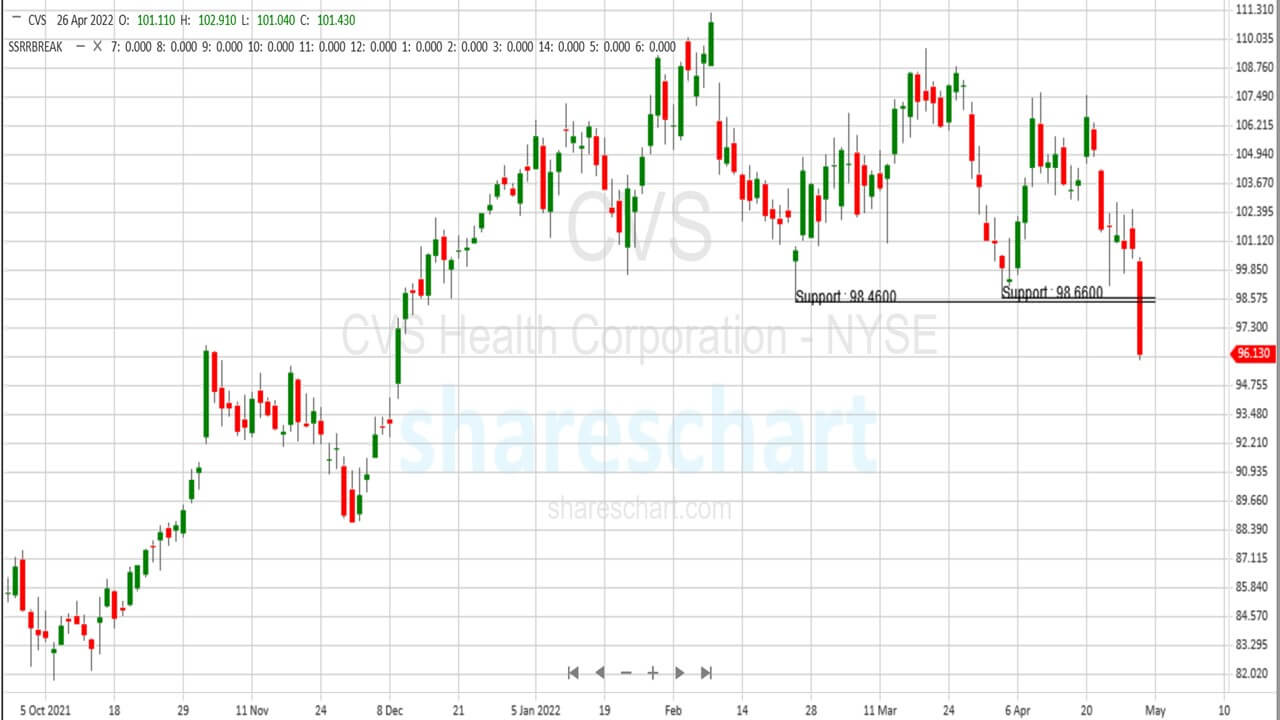 The chart of CVS Health Corporation has also broken a critical support level at $98.45. 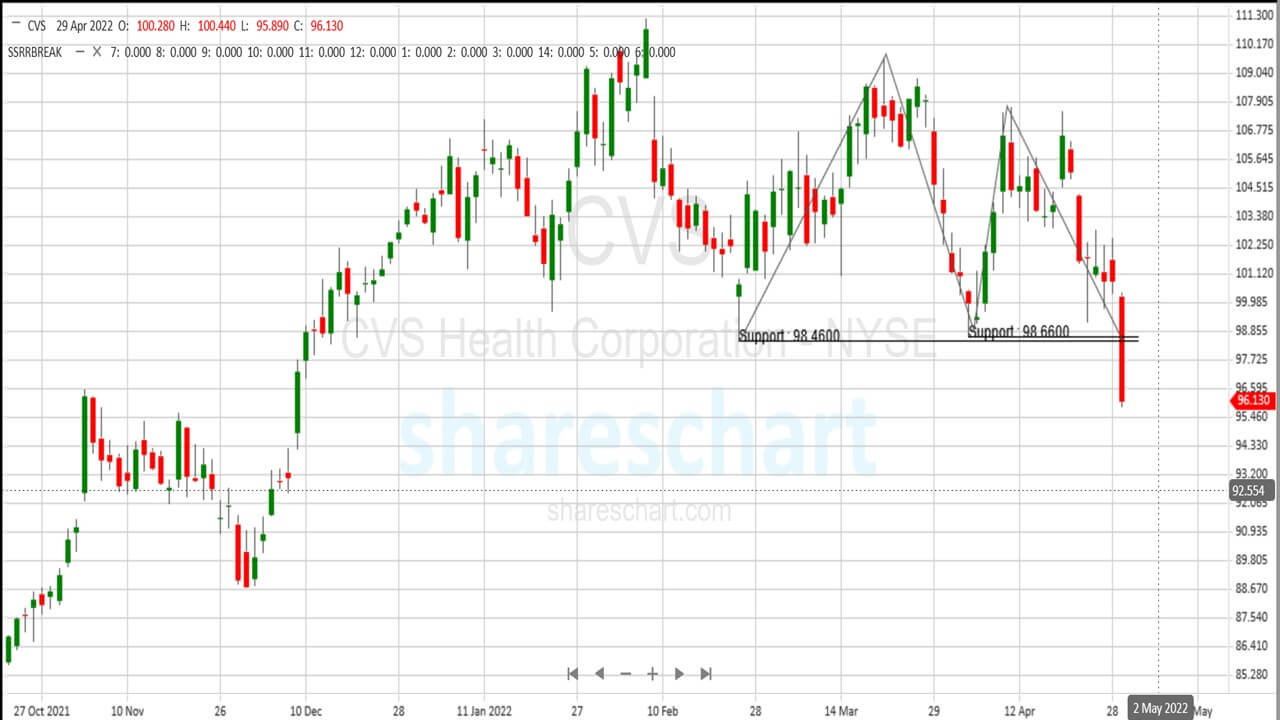 This is an important support level as this level represents the neckline of a Double Top pattern. The Double Top chart pattern is a clear bearish sign in technical analysis. It shows that the price was not able to overcome its last high, and instead falls below the previous low. 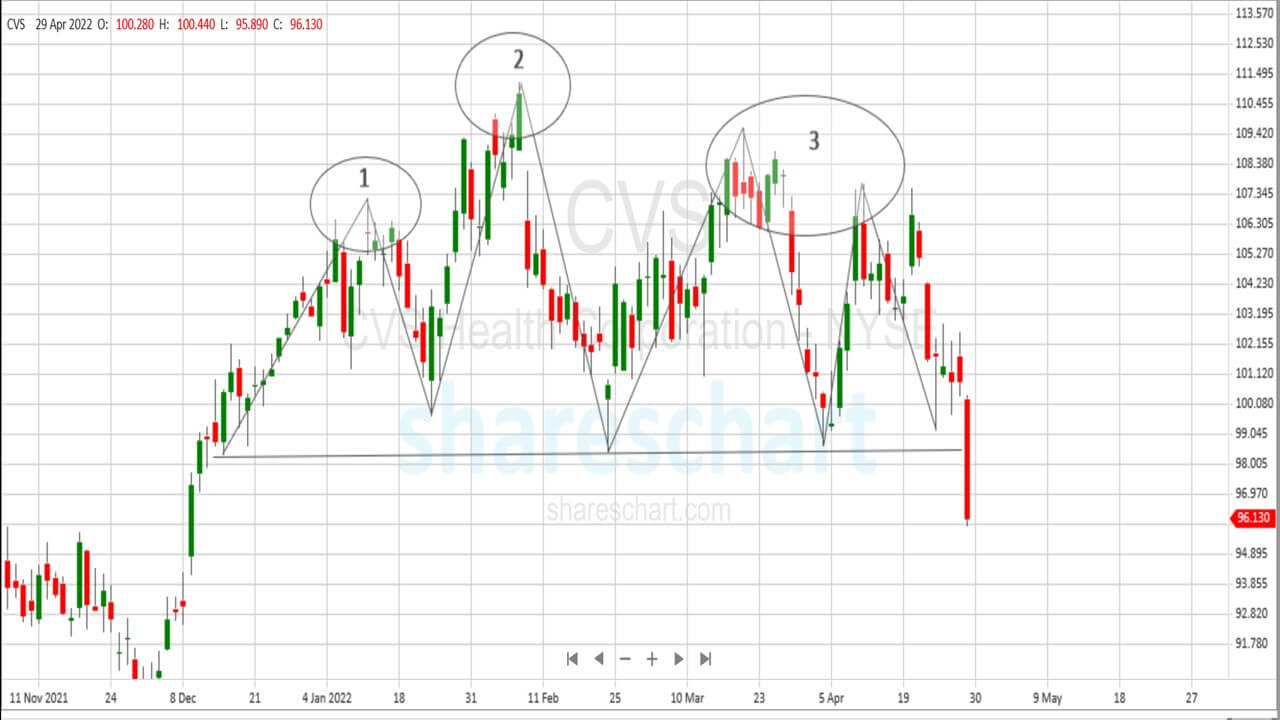 From a long-term perspective, the chart of CVS Health Corporation also shows a head-and-shoulders pattern. This is a stronger bearish pattern as it takes longer to form. Point 2 was the “head” of the pattern and point 1 and point 3 were the left and right shoulders of the pattern, respectively. The pattern shows that price finally broke below its support after failing to break above its resistance in at least 3 attempts. 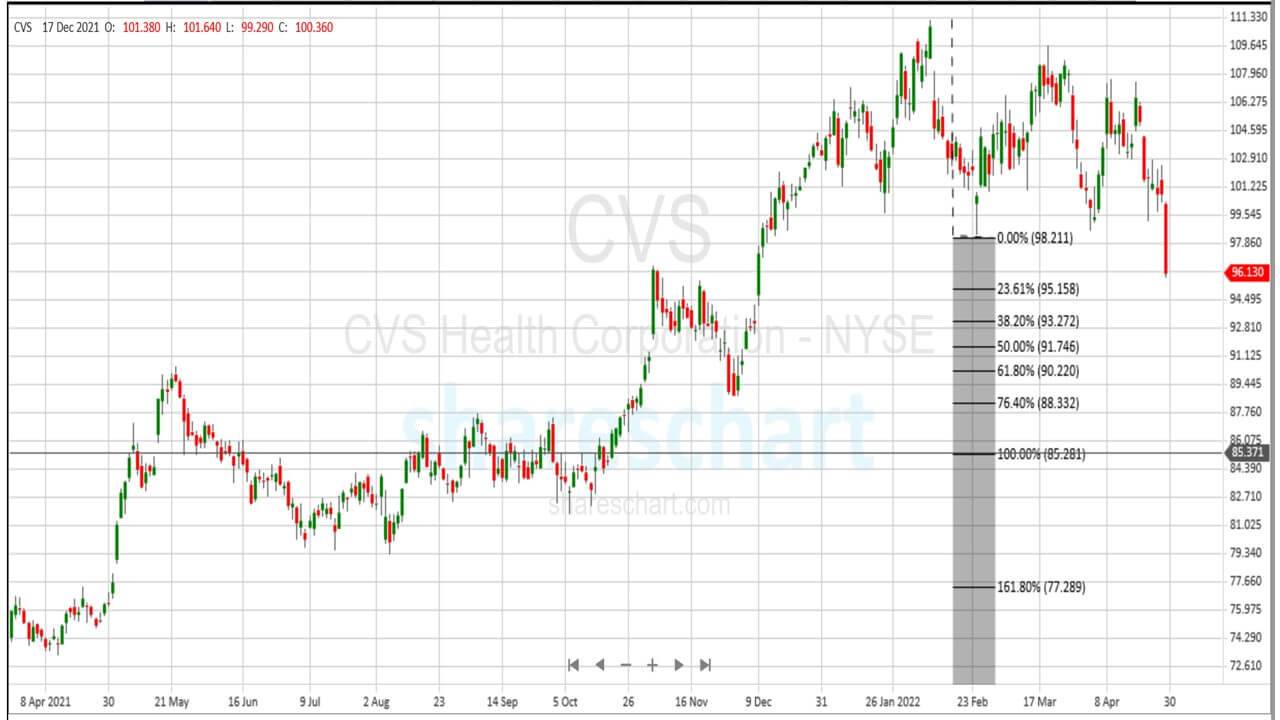 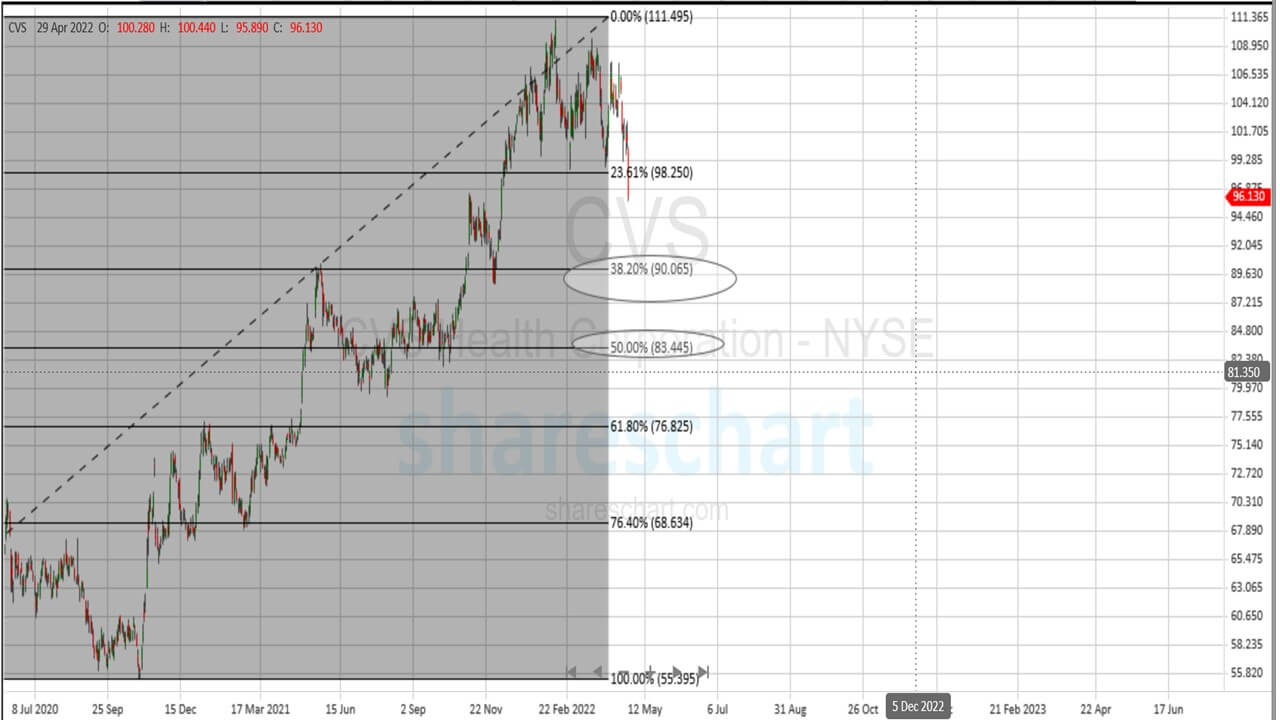 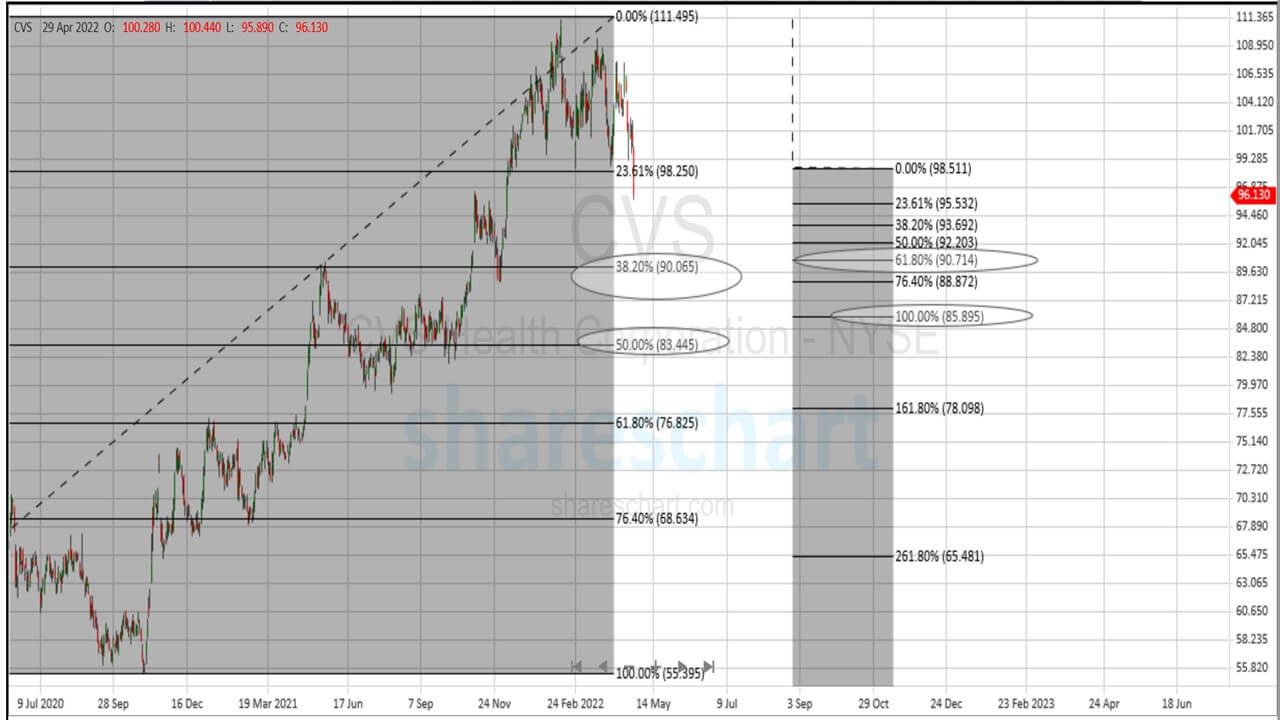 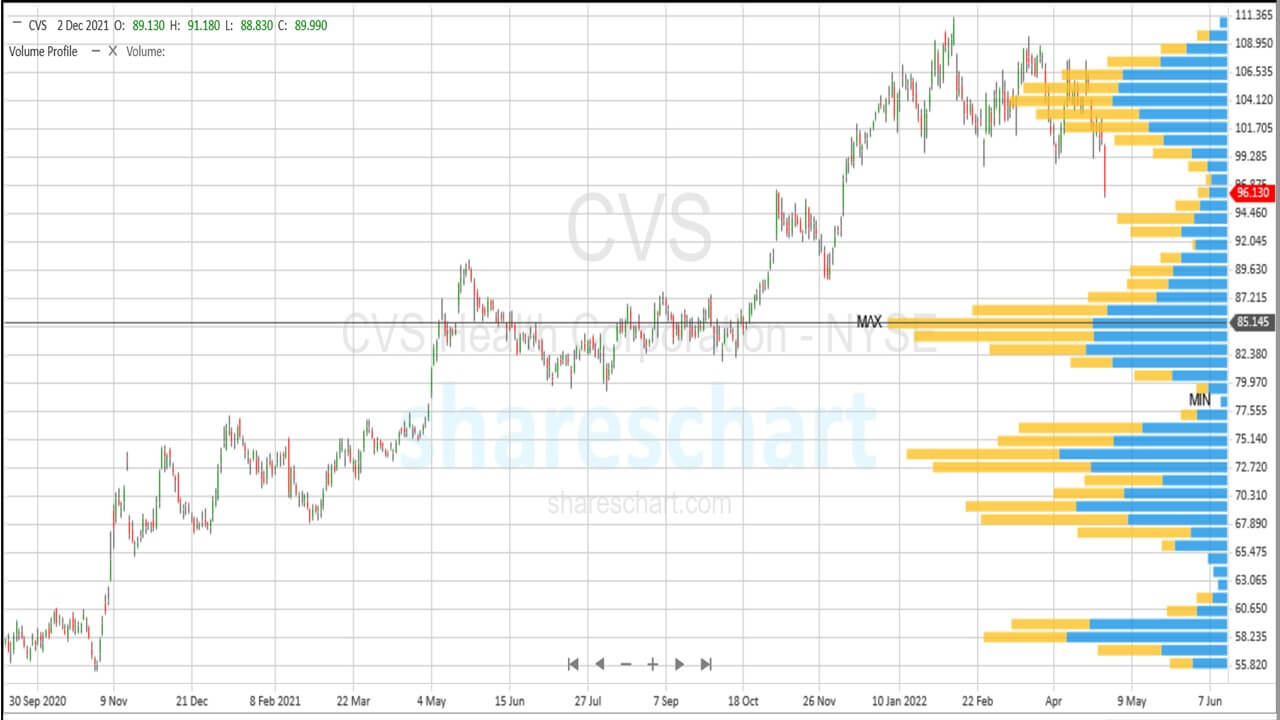 The volume profile indicator also provides clues to possible support levels for the stock. The “Max” values, which represent the highest volume traded during the uptrend, are between $83 and $86. This means that the area between $83 and $86 represents a strong consolidation phase for this chart and is likely to be a support level if the price falls back into this area.

On the other hand, here is the Fundamental perspective of CVS stock.

CVS is an undervalued stock, with a 44.07 percent sector discount on its price-to-earnings ratio. CVS stock is also selling at a 2.13x price to sales discount, showing that the market hasn’t yet factored in the company’s exceptional topline revenue.

CVS published predictions for key fiscal 2022 financial indicators that fell short of market expectations in the company’s Q4 2021 financial results presentation slides. Despite better-than-expected Q4 2021 profitability, the company did not revise its FY 2022 management prediction, which was first published on December 9, 2021 during its 2021 Investor Day.

During its Q4 2021 results call, CVS Health Corporation also released its key performance indicator predictions. “Vaccine volumes” and “in-store diagnostic testing volumes” are expected to plummet by 70-80 percent and 40-50 percent, respectively, this year, according to the company. In particular, CVS Health’s 2022 prediction excludes “a (COVID) increase later in the year” and “delivery of a fourth COVID-19 booster.” This appears plausible given the present state of affairs, with Omicron COVID-19 cases on the decline.

It’s also worth noting that analyst estimates for CVS Health Corporation have recently changed. These adjustments usually reflect the most recent short-term business trends, which are subject to change on a regular basis. As a result, analyst confidence about the company’s operations and profitability is reflected in favorable estimate revisions.

It seems that the fundamentals is considered strong. However, it would be wise for investors to wait for a lower price to enter the stock from a technical viewpoint.