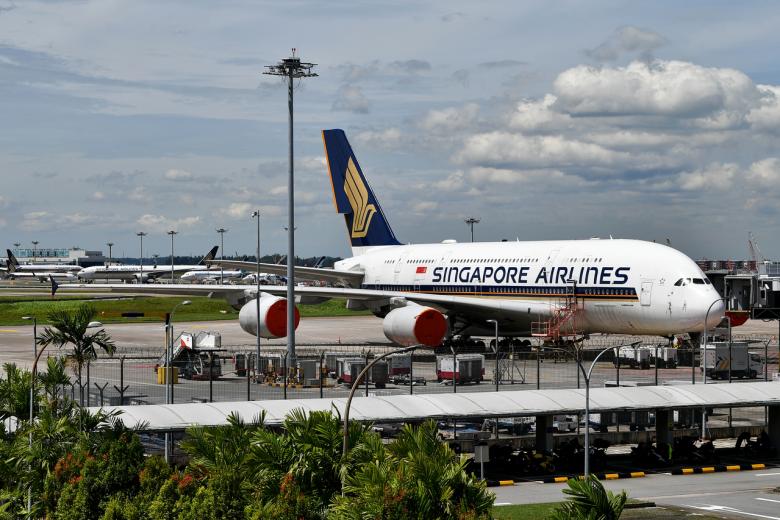 Flight reservations show an increase in travel demand, which is excellent news for Singapore’s air traffic goal. According to data from global air travel analytics firm ForwardKeys, air tickets booked to depart Singapore during the recent public holidays in early May, Labour Day (May 1) and Hari Raya Puasa (May 3), have risen to 178 percent of pre-Covid levels and as high as 336 percent of pre-pandemic levels on Apr 30.

Based on high travel demand expected in future reservations, Singapore may be on track to restore at least 50% of pre-Covid airport traffic this year.

According to their March 2022 operational numbers, SIA’s passenger capacity, measured in available seat-kilometres, reached 51% of pre-Covid-19 levels in March 2022.

In March, the airline resumed service from Johannesburg to Australia, Southeast Asia, and Cape Town, as well as Gatwick to Bangkok and Newark. The group’s passenger network comprised 93 destinations by the end of March 2022, including Singapore. This accounts for over two-thirds of the points traversed prior to the outbreak.

The codeshare agreement between Singapore Airlines and United Airlines was recently expanded to include 19 new US and Southeast Asian destinations.

The codeshare flights are subject to regulatory approvals, both partners said in a joint statement on Tuesday, and would be gradually made available for sale through the airlines’ respective booking channels (Apr 26).

Singapore Airlines Limited (SGX:C6L) makes extensive use of debt in its business. Some argue that the best approach to think about risk as an investor is to focus on volatility rather than debt. However as Warren Buffett famously noted, “volatility is far from synonymous with risk.” As a result, it may appear self-evident that debt should be factored into the riskiness of any particular stock, because too much debt might lead to a company’s downfall.

Debt helps a company until it is unable to repay it, either with fresh capital or free cash flow. In the worst-case scenario, a company can become bankrupt if it is unable to pay its creditors. A more common (though still unpleasant) situation is that it has to raise fresh equity capital quickly, resulting in long-term shareholder dilution. Debt may, of course, be an effective instrument in businesses, especially ones that demand a large amount of money. The first step in determining a company’s debt levels is to combine its cash and debt. 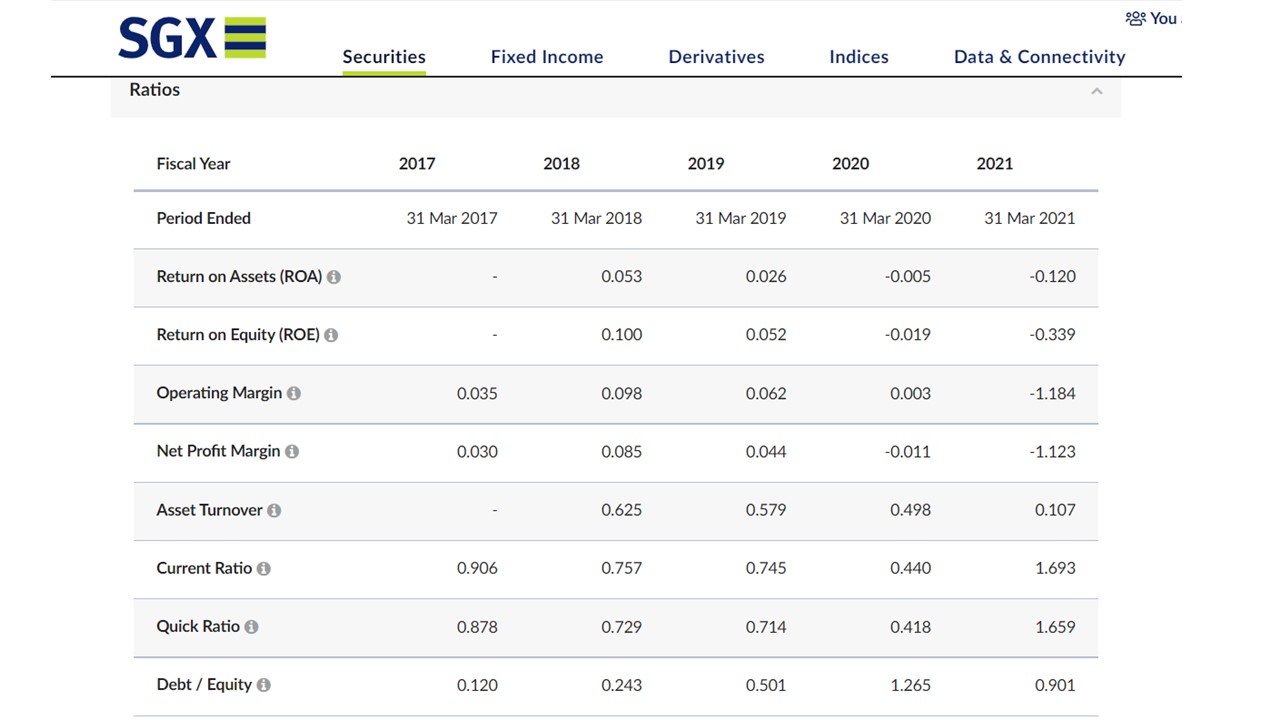 This shortage isn’t as bad as it seems, because Singapore Airlines is worth a massive S$14.7 billion, and it could readily raise funds to shore up its financial sheet if needed. It is, nevertheless, still useful to investigate its ability to pay off debt. Singapore Airlines has obligations, but it also has more cash on hand than debt.

Those that are losing money are, by definition, riskier than companies that have a lengthy history of success. To be honest, in terms of earnings before interest and taxes, Singapore Airlines lost money last year (EBIT). During that time, it spent S$3.5 billion in cash and lost S$1.6 billion.

Due to the fact that Singapore Airlines has more cash than debt, debt management should be simple. With only S$1.64 billion in cash on hand, it looks that it will need to raise funds again soon.

According to the SIA website, Temasek and Napier Investments Limited, a direct wholly-owned subsidiary of Temasek Holdings (Private) Limited, holds 55.38 percent of SIA shares. Temasek is expected to continue to back SIA share if it has to seek further capital in the future.

Unfortunately, SIA share does not pay dividends at this time.

In early 2020, SIA share conducted a rights offering to help secure greater cash flow. The exercise resulted in the issuance of almost S$5.3 billion in new shares, with the intention of raising S$9.7 billion through mandatory convertible bonds. According to SIA, the extra funds would be utilized to pay capital and operating expenditures.

If we look at the dividend yields of SIA share in the past, we can see that they ranged from 4.3 percent to 9.04 percent, for a five-year average of 6.56 percent, from 2015 to 2019. Keep in mind that this was before COVID-19 became a threat, and the leisure travel sector was at its peak.

The hawkish Fed, the ongoing conflict, supply chain issues (oil), and China’s zero covid policy, on the other hand, continue to dampen market sentiment. It might be a while before SIA share price reaches its earlier high of more than $10. Overall, the SIA share is still considered risky, and we would normally wait until we see a  positive free cash flow before investing in SIA share. However, you should definitely add SIA share to your watchlist.

Additionally, Singapore Airlines Limited has stated that its fiscal year 2022 results would be released after the market closes on May 18, 2022.

SIA stock price fell from over $11 to under $3.50 during the pandemic. Since last April, it has entered a consolidation phrase and formed a triangle reversal pattern. 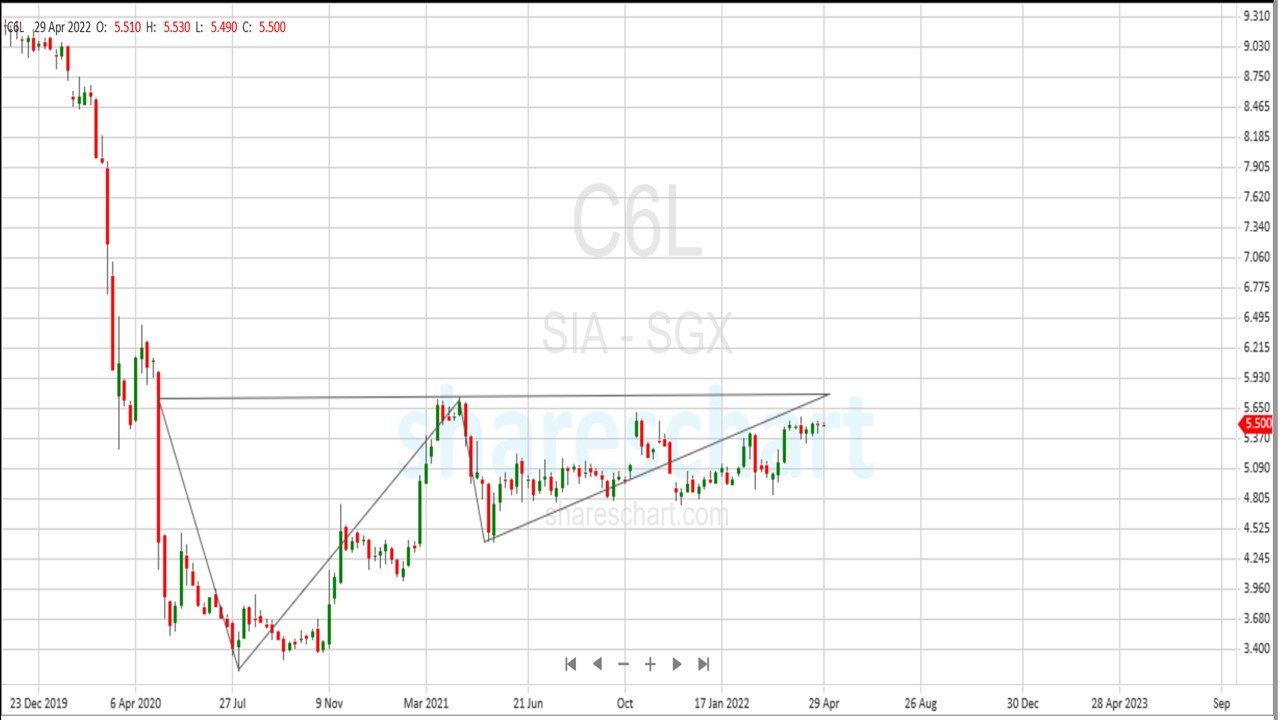 Based on the Fibonacci projection of the reversal triangle, the final upside price target should be $8.30. We measure the distance from the low of the triangle, its “neckline”, and project it up from the neckline to reach the price target. 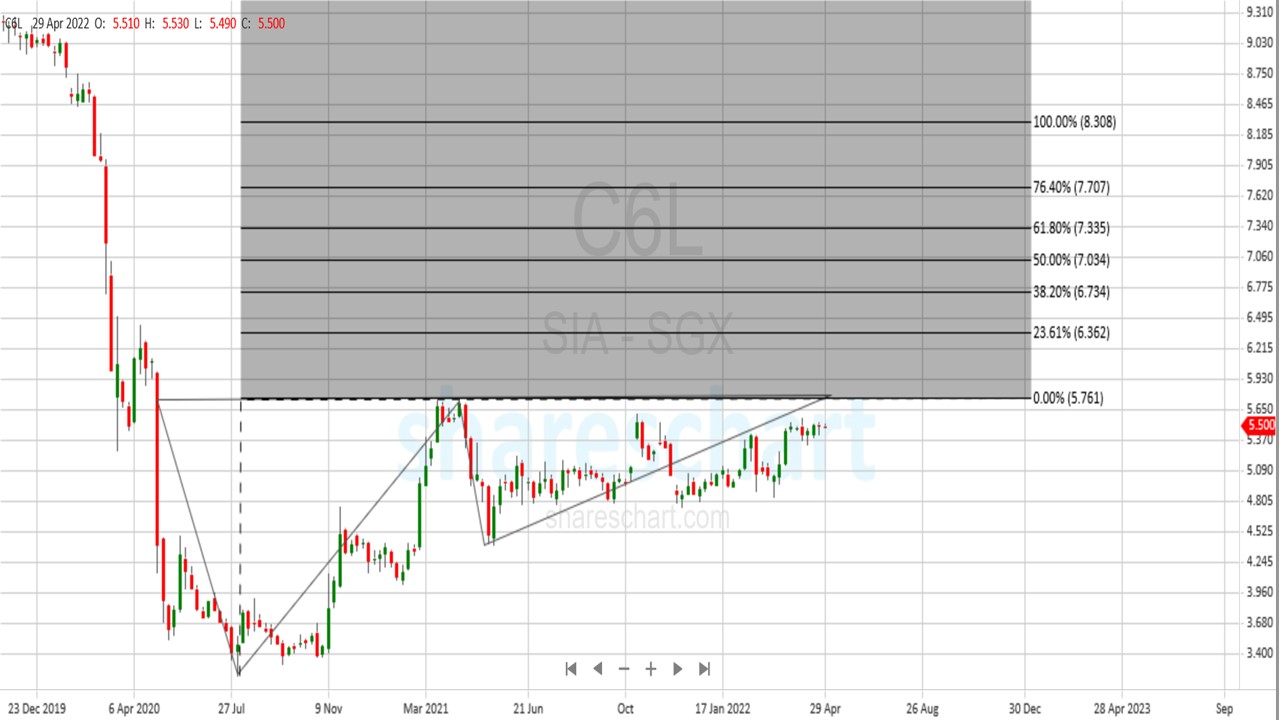 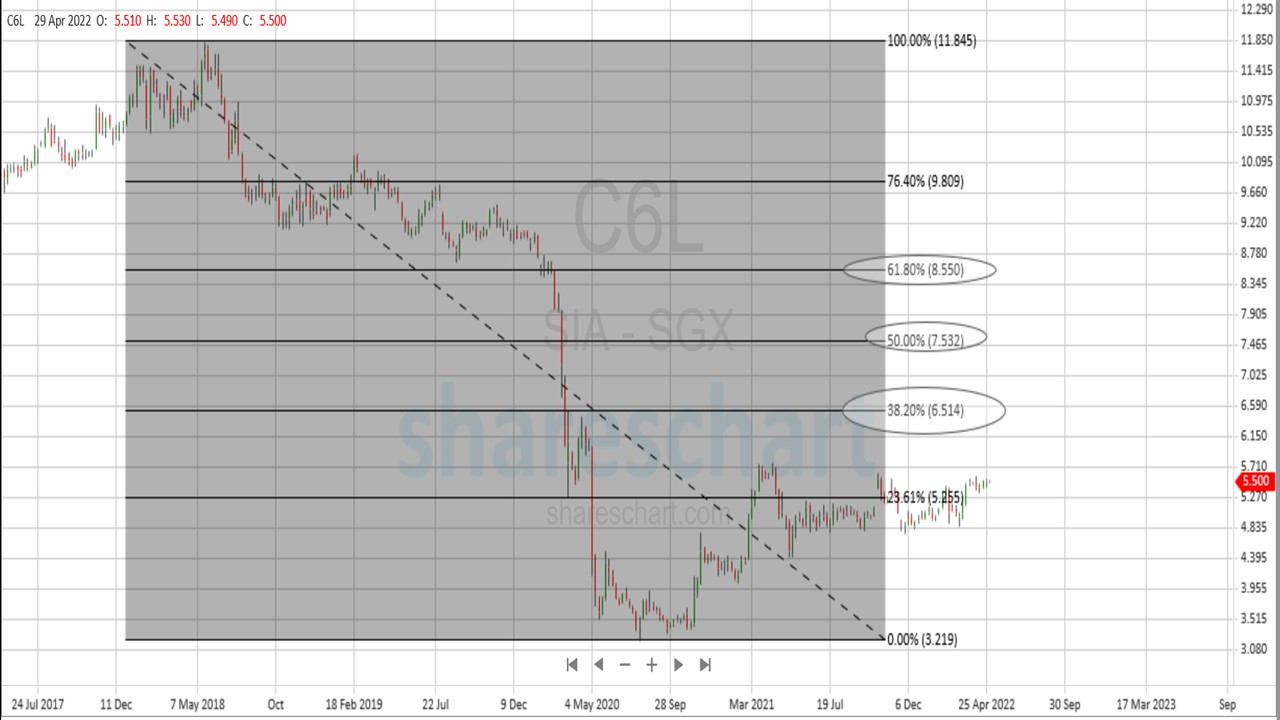 If we combine the Fibonacci retracement method and the projection method, the first price target is around $7.30 to $7.50, followed by a next price target of around $8.30 to $8.50. 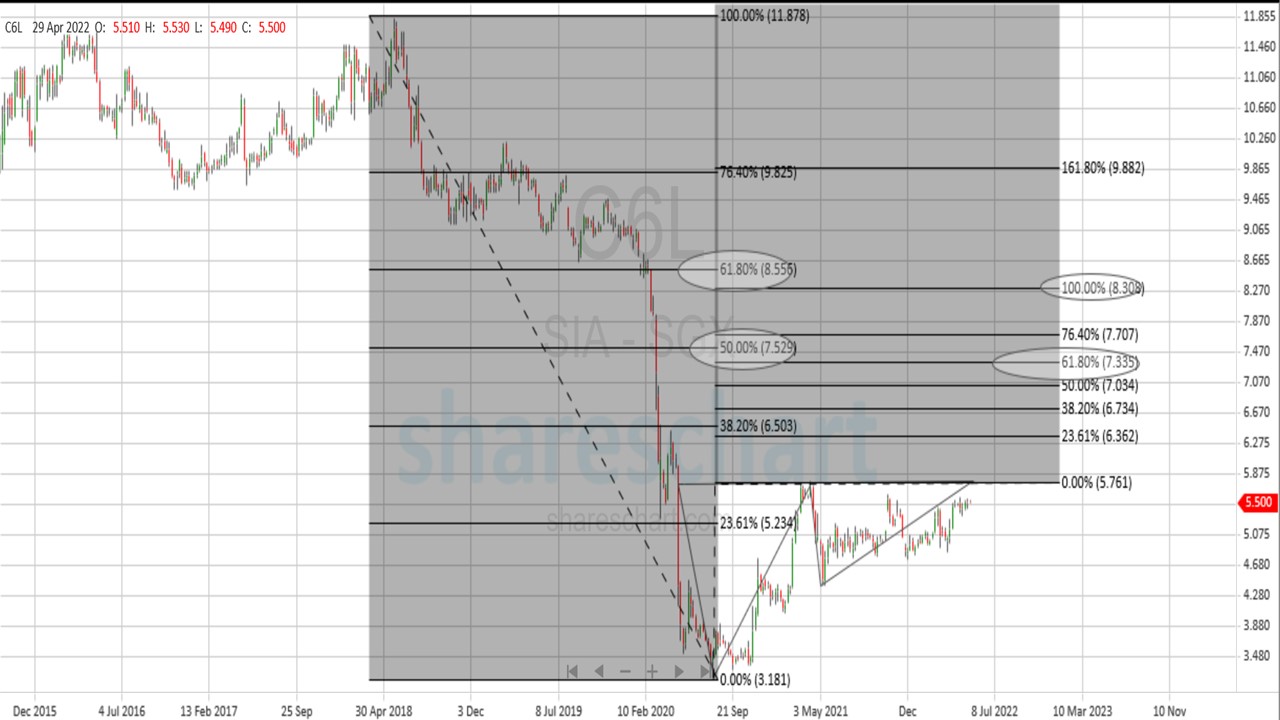 However, to put things in perspective, the chart of SIA is not too bullish in the short term. The price has recently risen above the upper band of the STARC indicator and has failed to convincingly break above that level. The upper band has been tested a few times during the sideways trend of the last 1 year. History shows that the upper band proves to be a strong resistance for the chart during this period. 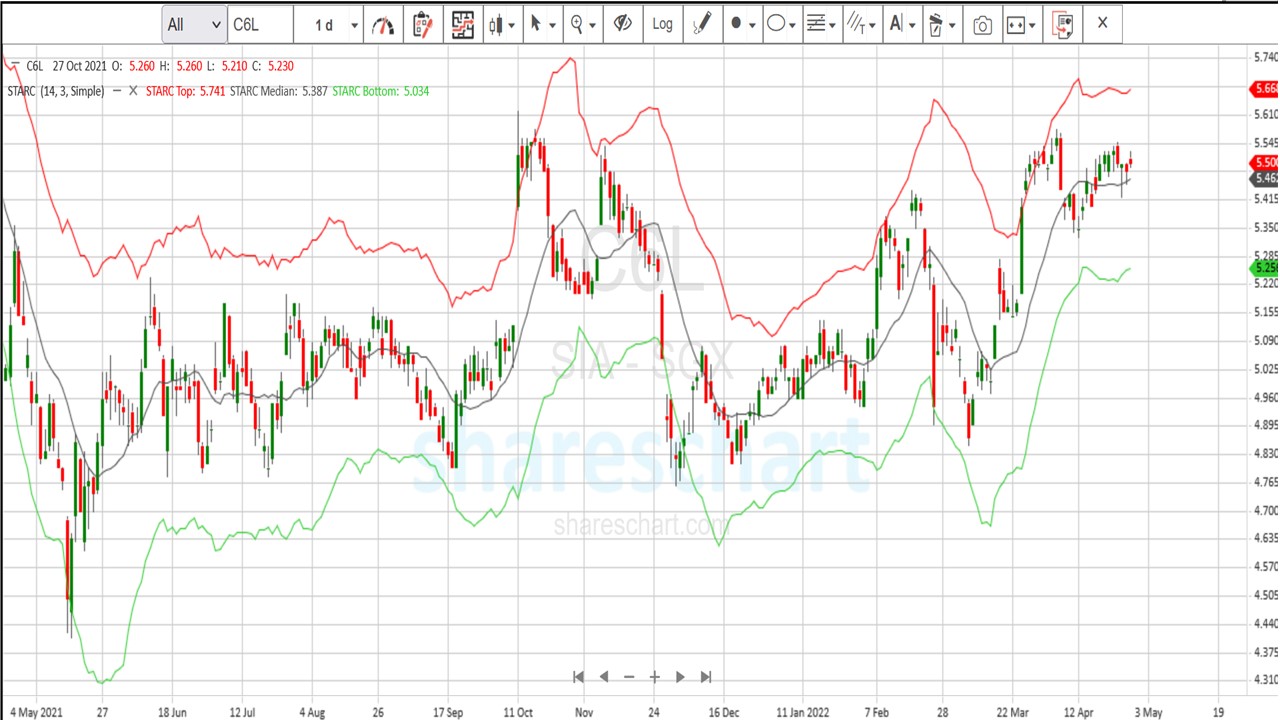 Both the Aroon indicator and the Elder Ray indicator also showed that the price is overbought in the short term. Therefore, the probability of the price breaking through its critical resistance is not high for the time being. 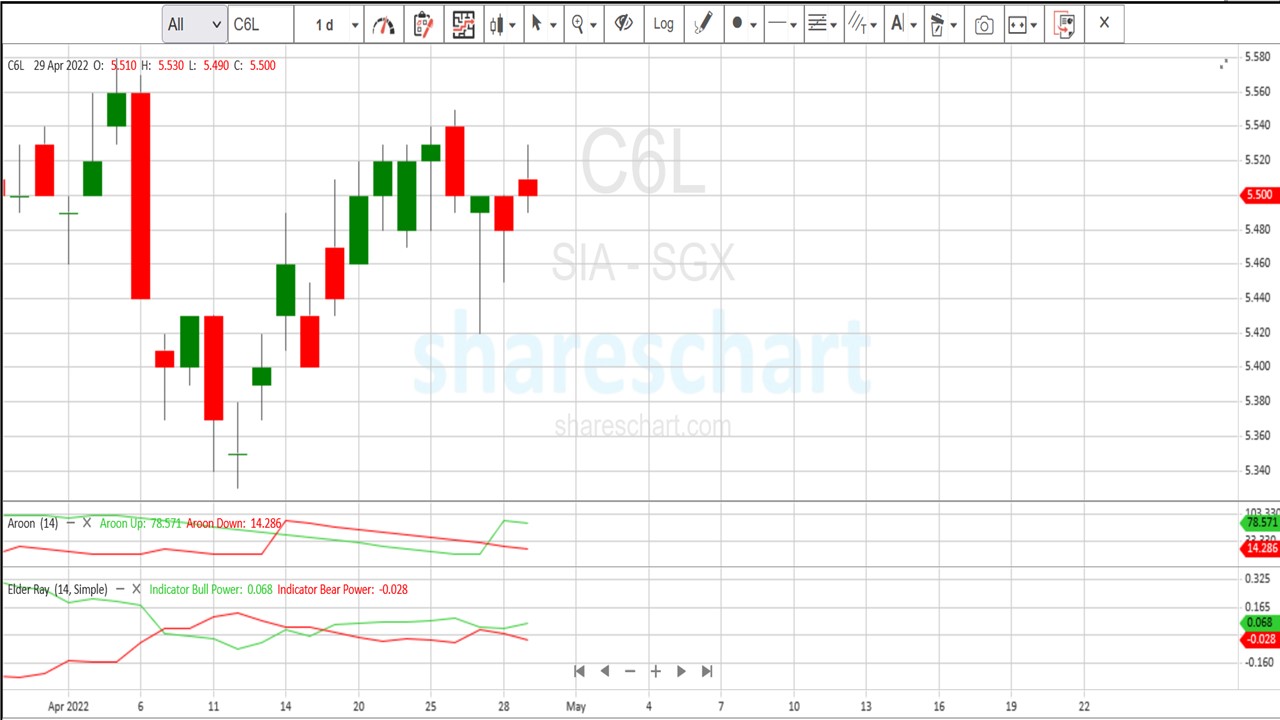 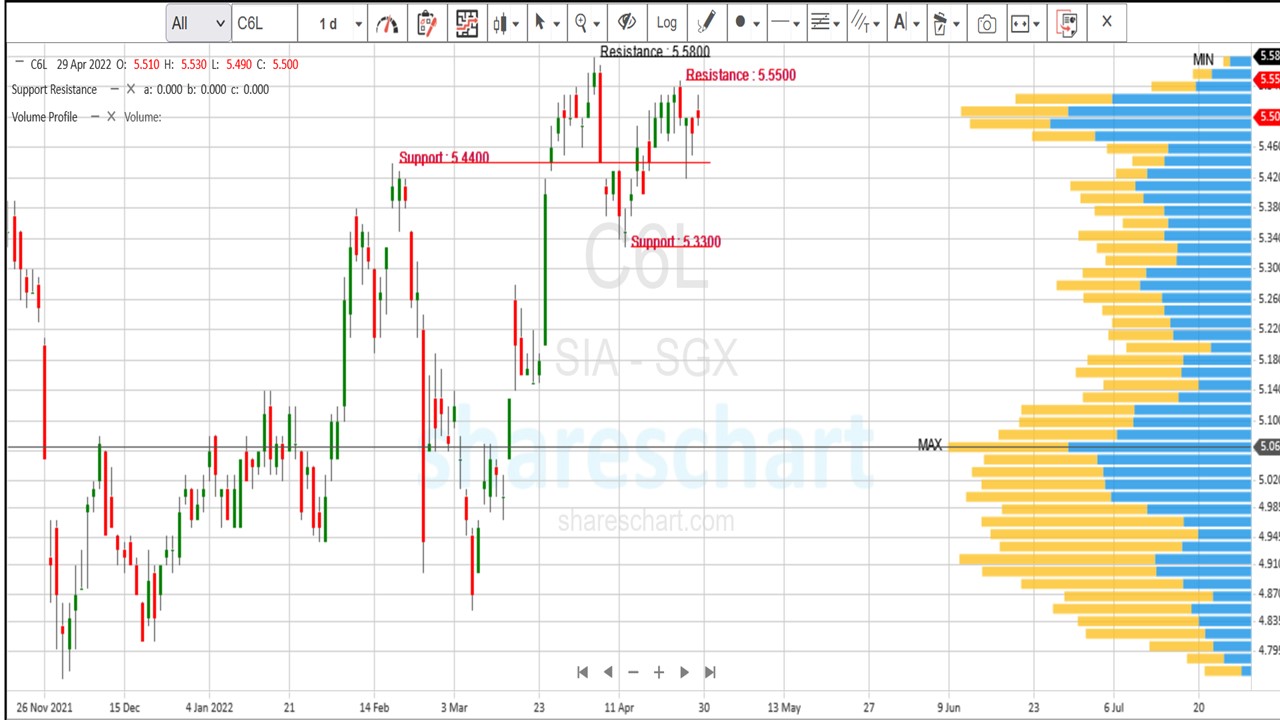 Therefore, it is likely that the price of SIA will fall back to its support level as it is still in a sideways consolidation phase. The immediate current support level is $5.33, followed by $5.06. $5.06 is the highest traded volume since last November. Therefore, for traders interested in buying this stock, it is advisable to buy it when the price falls back to $5.06.

Based on the above fundamental analysis and Technical Analysis, it seems it is not a good time to enter the SIA stock now.