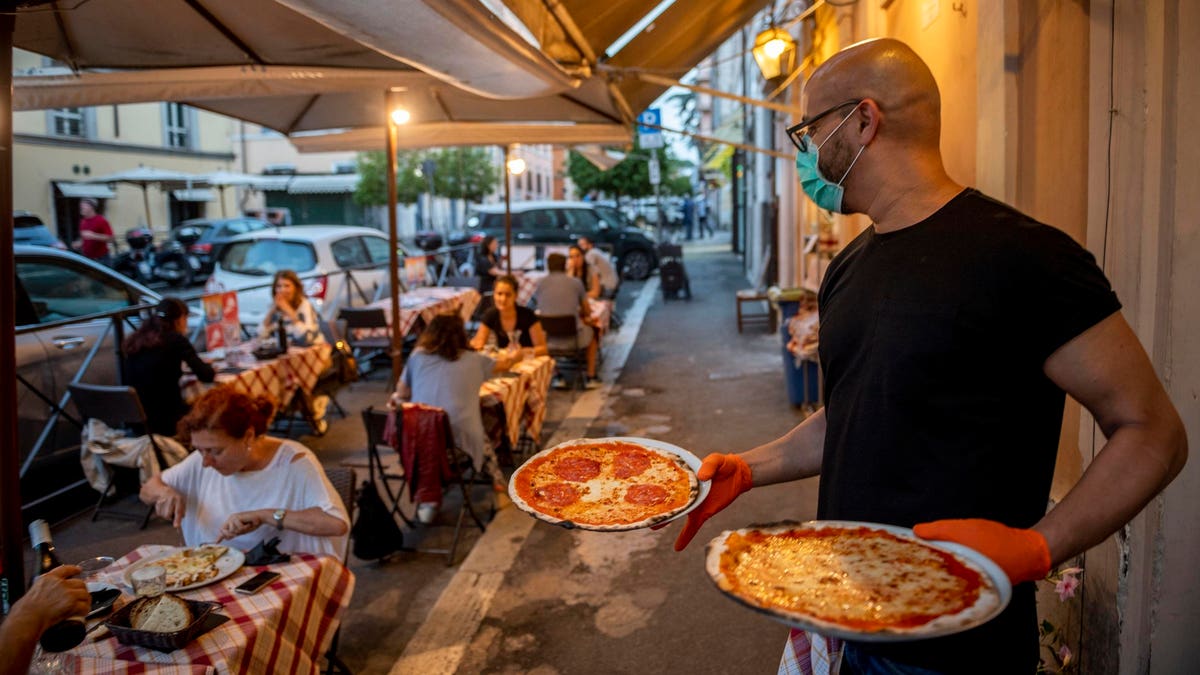 Israel and Italy join France as the latest countries responding to a surge in Covid-19 cases to consider “green passes” that show someone is immune to the coronavirus or has recently tested negative, saying they’ll be required for indoor dining, gyms and other venues, officials of both countries announced Thursday.

A waiter brings the pizzas to the people of the restaurant at Trattoria and Pizzeria Luzzi near the … [+] Colosseum after two months of closure in May.
Getty Images

For Israel, an early leader in vaccination, the passes proposed by new Prime Minister Naftali Bennett’s office are a partial reinstatement system the country had in place earlier in the pandemic, before relaxing restrictions as new infections and deaths plummeted and vaccinations increased.

After new infections began ticking up late last month, Israel began reintroducing restrictions in hopes of preventing another full-fledged coronavirus wave, including wearing face masks indoors, more selective entry requirements for international visitors and now the passes that will go into effect next week, if they’re approved by the government.

Draghi said he hopes the pass system will push more Italians to get vaccinated “straight away,” saying Thursday that “without vaccinations, we’d have to close everything again.”

It worked well for France, which said last week people would need to show proof of vaccination to visit restaurants, malls and museums–more than 1 million people signed up for vaccine appointments in less than a day after the announcement.

Similar systems have been in use across Europe for weeks, and diners are required to present vaccine passes to dine indoors in countries like Austria, Cyprus, Denmark, Latvia, Lithuania and Luxembourg.

In the U.S., while states like New York offer a mobile app that gyms, bars and other businesses can use on a voluntary basis to ensure patrons are vaccinated or tested negative, other states have passed laws outlawing local governments (and sometimes businesses) from requiring proof of vaccination as a condition of receiving goods or services.

The delta variant, thought to be more easily transmitted than earlier forms of coronavirus, is the driving force behind new infections in countries all over the world. In the U.S., the delta variant makes up 83% of new cases sequenced by the Centers for Disease Control, the bureau’s director said during a Senate hearing Tuesday. Cities like Los Angeles and Las Vegas have reintroduced mandatory masking in public spaces to prevent the likelihood of another coronavirus wave as infections tick up. A British study released Wednesday suggests the AstraZeneca and Pfizer coronavirus vaccines effectively prevent symptomatic delta infections, as long as patients receive both doses.