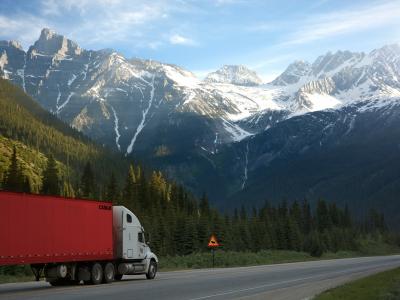 The nation’s largest truckload carrier, Knight-Swift Transportation, sees “over-the-road contract rate increases trending in the mid-teens” for 2021. However, tractor count and utilization will see some pressure as “sourcing drivers remains challenging.” The outlook was provided in the company’s second-quarter earnings report Wednesday.

Knight-Swift (NYSE: KNX) reported earnings per share of 98 cents, a 10 cents-per-share beat relative to analysts’ expectations. The outperformance was less impressive when normalizing gains on equipment sales ($15.1 million in the quarter versus roughly $5 million on average per quarter over the last two years) and an increase in unrealized gains from its investment in Embark Trucks, both of which may not recur at the same magnitude going forward. The adjusted earnings result was 41 cents higher than the year-ago quarter and 15 cents higher than the first quarter.

The Phoenix-based carrier raised its full-year outlook to account for more than the second-quarter performance and earnings accretion from recent acquisitions.

The company’s full-year 2021 adjusted earnings per share expectations increased to a range of $3.90 to $4.05, from the prior range of $3.45 to $3.60. The 13% guidance raise at the midpoint of the range includes the second-quarter outperformance (approximately 10 cents) and 16 cents in expected earnings accretion from the acquisition of AAA Cooper (13 cents in the back half was the initial guidance) and third-party logistics provider UTXL (undisclosed).

The new range implies nearly 20 cents in upside to management’s prior guide, again at the midpoint of the range.

“We expect the unprecedented demand for over-the-road truckload capacity to continue throughout 2022,” a separate presentation read. “Capacity expansion continues to be limited as new tractor builds are constrained by parts availability” and “sourcing and retaining drivers will remain challenging and lead to additional driver wage inflation.” The combination of conditions is expected to “continue to support a favorable rate environment.”

Both Fleets See ORs In The 70s

Revenue in the trucking segment increased 8.2% year-over-year to $883 million as revenue per tractor grew 10.3%. The increase in revenue was due to an 18.8% jump in rates (revenue per loaded mile excluding fuel) at $2.69 per mile. Tractor utilization (miles/tractor) slid 8% given headwinds recruiting and retaining drivers (the metric was flat sequentially). Increased driver pay offset some of the rate increase in the period but operating leverage was realized as the combination of salaries, wages and benefits and purchased transportation as a percentage of revenue declined 150 basis points year-over-year.

The division posted an 80.9% OR, 460 bps better year-over-year and 90 bps better than its strong first quarter. The Swift fleet recorded a 75.7% adjusted OR, with the Knight fleet posting a 78.7% adjusted OR. The trucking segment also includes results from Knight-Swift’s dedicated and reefer fleets.

On a year-over-year comparison, logistics revenue more than doubled to $162 million as both brokered loads and revenue per load increased 55.3% and 55.8%, respectively. Gross profit margin remained flat at 15.7% even with the cost headwinds associated with purchased transportation. The division recorded 440 bps of OR improvement at 91.1% on an adjusted basis.

Intermodal revenue increased 39.4% year-over-year to $115 million with volumes climbing 19.9% and revenue per load increasing 16.3%. The division saw 180 bps in margin improvement from the first quarter even as the industry experienced rail service issues, longer container turns, chassis shortages and labor issues. The 95% adjusted OR was significantly improved from the operating loss (105.3% OR) reported in the year-ago quarter.

“Intermodal is exhibiting solid momentum, and we expect operational improvements in cost structure and network design in the coming quarters to lead to continued improvement,” the press release read.

“We believe truckload shippers are recognizing the value of our unique and unmatched terminal network and industry-leading trailer pool capacity,” CEO Dave Jackson stated in the release. “We are energized by our recent results, including the growing adoption of our power-only services by small carriers, and even more excited about our plans already underway to drive further growth, meaningful returns and less cyclicality in the future.”