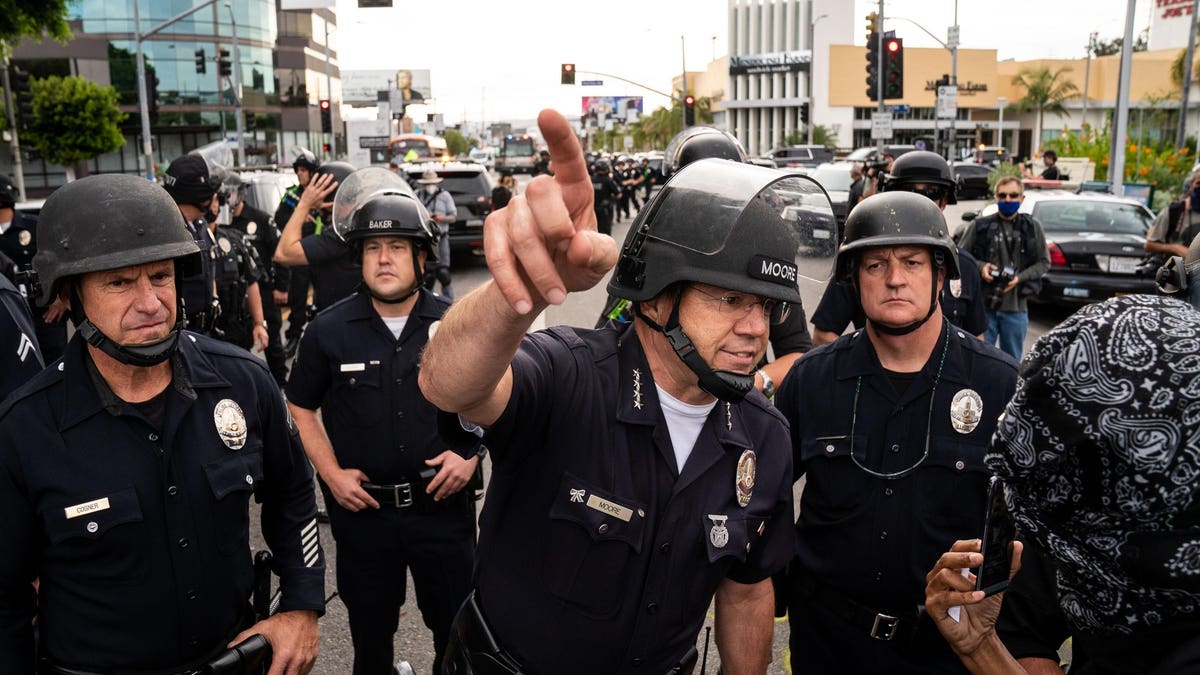 A group of Los Angeles Police Department employees are suing the city over its requirement they get vaccinated against Covid-19, claiming it violates their constitutional rights–the latest in mounting pushback against mandates from police officers and unions across the country.

LOS ANGELES, CA – MAY 30: LAPD Chief of Police Michel Moore speaks with protesters in the Fairfax … [+] District on Saturday, May 30, 2020 in Los Angeles, CA. Protests erupted across the country, with people outraged over the death of George Floyd, a black man killed after a white Minneapolis police officer pinned him to the ground with his knee. (Kent Nishimura / Los Angeles Times via Getty Images)
Los Angeles Times via Getty Images

As was first reported by local news outlets on Sunday, six employees of the LAPD filed a federal lawsuit over the weekend asking to overturn the city-wide order they argue “further seeks to embarrass, humiliate, shame and deprive the liberty of persons who decline to state their vaccination status.”

The employees, part of a 12,000-person force that is nearly half unvaccinated, argued the mandate doesn’t take into account natural protections among those who previously had Covid-19 and claims employees can be protected “through non-pharmaceutical interventions such as health screenings, wearing masks and quarantine.”

This is at least the second lawsuit to spawn from a major law enforcement agency over a local mandate: Oregon Gov. Kate Brown, a Democrat, was also sued by a group of state troopers and firefighters over her mandate for state workers this month.

In Chicago, the city’s largest police union, the Fraternal Order of Police, vowed to take action in court if Mayor Lori Lightfoot (D) announces a mandate for all city employees, as she has signaled she will.

Meanwhile, leaders in Portland, Ore., have decided not to enforce its citywide vaccine mandate on police officers after the Portland Police Department forcefully pushed back against the requirement, arguing it was illegal and would lead to mass resignations within an already under-staffed force.

Other police union leaders, including those in San Jose and Cincinnati, have similarly warned that vaccine mandates could lead to staffing problems in their departments, which are already having trouble recruiting and keeping enough officers.

An attorney for the Portland Police Association warned before city officials made their decisions that officers are “so deeply” opposed to vaccine requirements that “some will leave the profession before accepting a mandate.”

Some police forces are battling high levels of vaccine skepticism despite Covid-19 being the leading cause of U.S. law enforcement line-of-duty deaths. Some 242 officers died of the virus in 2020, and another 154 so far in 2021, according to the Officer Down Memorial Page. Nonetheless, large numbers of police officers are refusing to get the vaccine, a trend that has also emerged among other front-line workers. In New York, where officers must either get vaccinated or submit to regular testing, data from late August showed just under half of the police department’s 35,000 uniformed officers and 18,000 civilian employees were inoculated. And that’s in a state with a high vaccination rate: more than 81% of all adults are at least partially vaccinated against the virus.

Vaccine hesitancy among police officers has been sourced to numerous factors like officers rejecting the shot because they think previous Covid-19 infection has brought them immunity. Federal health guidance maintains that those who have had the disease before should still get vaccinated because it’s not clear how long post-infection protection lasts. Differences in the communities they serve, as well as misinformation about the vaccine may also be playing a role, The Washington Post reported in an investigation earlier this year.