Lawmakers, Staff Advised To Avoid Capitol Saturday Amid Fear Of Violence At ‘Justice For J6’ Rally 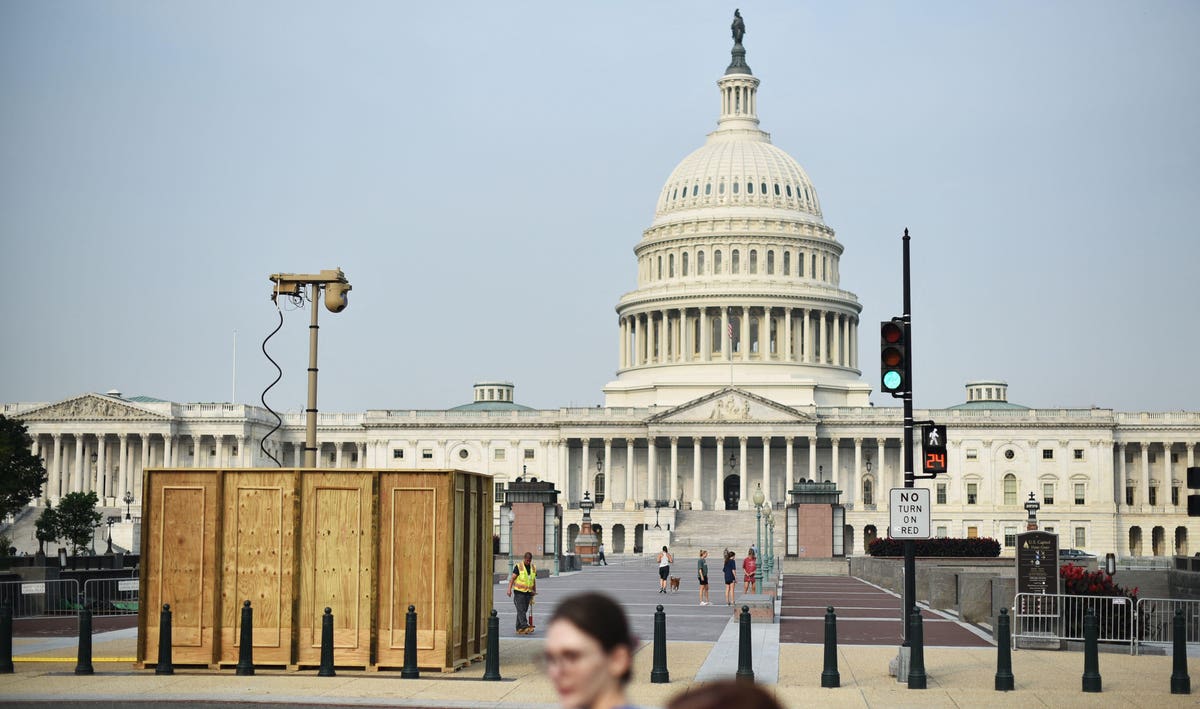 A top congressional security official is urging lawmakers and staff to steer clear of the Capitol on Saturday after top Democrats raised concerns about the possibility of violence at a rally to support Capitol riot defendants.

A temporary security camera is seen near the US Capitol in Washington, DC on September 14, 2021. – … [+] Security around the Capitol is being heightened ahead of the “Justice for J6” rally on September 18, 2021, in support of rioters who stormed the US Capitol protesting against the election of US President Joe Biden. (Photo by MANDEL NGAN / AFP) (Photo by MANDEL NGAN/AFP via Getty Images)
AFP via Getty Images

House Sergeant-at-Arms William Walker said in an alert obtained by Forbes that members of Congress and their staff are “strongly encouraged to avoid the U.S. Capitol complex” on Saturday unless they are required to be there.

Walker added that anyone who comes to the Capitol should use the underground tunnel network that connects the Capitol building and other buildings in the complex rather than walking outside.

Walker said fencing around the Capitol will be reinstalled “as early as Wednesday” and that several streets in and around the complex are likely to be closed to traffic.

The alert comes after several top Democrats, including Senate Majority Whip Dick Durbin and Rep. Tim Ryan of Ohio, who chairs a House panel that oversees the Capitol Police budget, raised concerns about the possibility of violence.

Matthew Braynard, the former Trump campaign aide organizing the event, has dismissed those concerns, telling Forbes he has held similar rallies in D.C. “without incident” and been “fully cooperative” with law enforcement over the past month.

Braynard also said he has a “private, diplomatic security team” working with the Capitol Police, as well as many volunteers to “ensure this is a safe and productive event.”

Congressional leaders in both parties have expressed confidence the Capitol Police and other law enforcement are better prepared for the rally on Saturday than they were for the January 6 attack. “I believe they are well equipped to handle what may or may not occur,” Senate Minority Leader Mitch McConnell said at a press conference on Tuesday.

“Similar demonstrations are being planned at some state capitols across the country,” Walker said in the alert. Defending alleged Capitol rioters has become a cause celebre for many Trump supporters, including some Republican members of Congress.

Spokespeople for three House Republicans who have vigorously supported Capitol rioters, Reps. Marjorie Taylor Greene of Georgia, Madison Cawthorn of North Carolina and Matt Gaetz of Florida, told Forbes their bosses are not attending the rally. Sens. Josh Hawley of Missouri and Ted Cruz of Texas said they don’t plan to attend either, with Hawley stating, “I don’t know who’s organizing it. I’m not going, I’m not following it.”