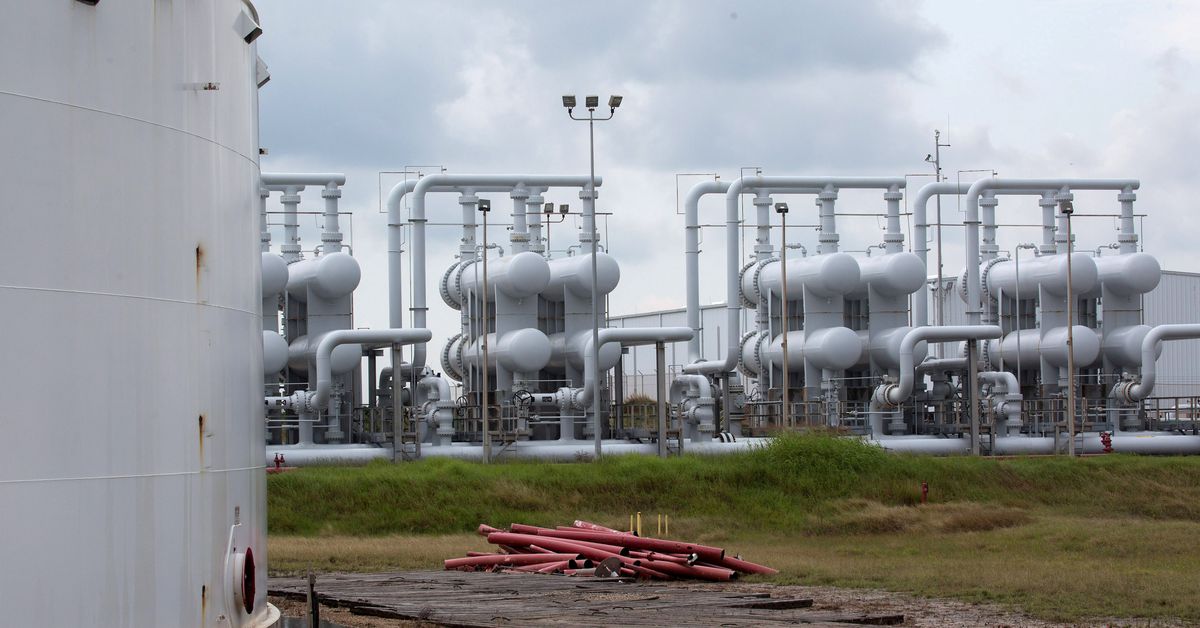 An oil storage tank and crude oil pipeline equipment is seen during a tour by the Department of Energy at the Strategic Petroleum Reserve in Freeport, Texas, U.S. June 9, 2016. REUTERS/Richard Carson

LONDON, Sept 14 (Reuters) – Oil prices hit a six-week high on Tuesday as Hurricane Nicholas weakened into a tropical storm, bringing the threat of widespread floods and power outages to Texas and Louisiana, and as the International Energy Agency forecast a big demand rebound for the rest of the year.

Both contracts have risen for three consecutive sessions and were trading at their highest since early August.

Evacuations were under way on Monday from offshore oil platforms in the area while onshore oil refiners also prepared for Nicholas. read more

“The substantial production outages in the Gulf of Mexico remain one of the factors driving prices,” Commerzbank said.

About 794,000 barrels per day (bpd), or more than 40% of the U.S. Gulf’s oil and gas output, remained offline on Monday, two weeks after Ida slammed into the Louisiana coast, according to offshore regulator Bureau of Safety and Environmental Enforcement (BSEE). read more

After three months of decline in global oil demand, rollouts of COVID-19 vaccines are set to rekindle appetite for oil that was suppressed by pandemic restrictions, especially in Asia, the International Energy Agency (IEA) said on Tuesday.

The IEA sees a 1.6 million bpd demand rebound in October and continued grwoth until the end of the year.

These forecasts are well below those of the Organization of the Petroleum Exporting Countries (OPEC), which expects demand to grow by about 5.96 million bpd this year and 4.15 million bpd next year. read more

Protesters blocked an oil tanker from loading at the Libyan terminal of Es Sider on Tuesday, the National Oil Corporation (NOC) media office and an engineer at the port said.

Details on China’s plans to sell crude from its strategic reserves served to dampen price gains on Tuesday.

China’s state reserves administration said it would auction about 7.38 million barrels of crude on Sept. 24, marking the first batch of sales in a rare release of strategic inventories.