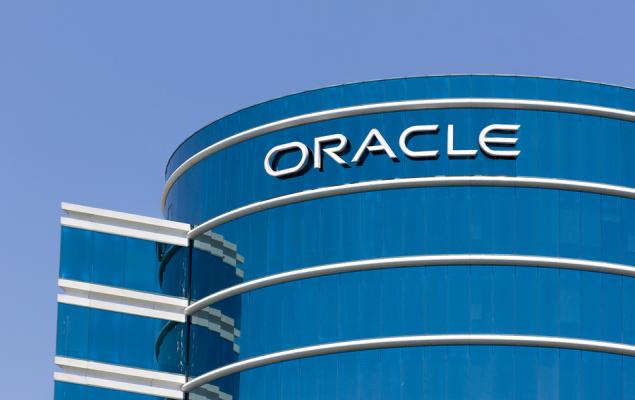 Oracle (ORCL – Free Report) reported first-quarter fiscal 2022 non-GAAP earnings of $1.03 per share, beating the Zacks Consensus Estimate by 6.2%. The bottom line was up 11% from the year-ago quarter’s levels (up 9% at constant currency or cc). Management had guided non-GAAP earnings per share in the range of 94-98 cents at USD and 91-95 cents at cc.

Revenues increased 4% (up 2% at cc) year over year to $9.728 billion. The top-line performance was mainly driven by strength in cloud business. However, revenues missed the Zacks Consensus Estimate by 0.5%.

For the fiscal first quarter, Oracle had anticipated total revenue growth rate — on a year-over-year basis — in the range of 3-5% at USD and 1-3% at cc.

Following the announcement, shares of Oracle are down 3% in the premarket trading on Sep 14. In the past year, shares of the company have returned 45.8% compared with industry‘s growth of 34.4%.

Oracle’s Cloud services and license support revenues (nearly 76% of total revenues) in the reported quarter increased 6% year over year (up 5% at cc) to $7.371 billion. The upside can be attributed to continued strength in the Fusion, Autonomous Database and Oracle Cloud Infrastructure (OCI) services.

Break up of Cloud Services and License Support Revenues

Applications revenues (contributed 41% to total cloud services and license support revenues) amounted to $3.041 billion, up 8% year over year (up 7% at cc).

Meanwhile, Cloud license and on-premise license revenues (8% of total revenues) declined 8% year over year (down 9% at cc) to $813 million.

Revenues from Americas (representing 54.7% of total revenues) increased 5% year over year to $5.321 billion.

Growing clientele is helping the company to maintain its leading position in cloud ERP domain. The migration of several large-scale SAP customers to Fusion ERP cloud and Fusion HCM remains a tailwind.

Oracle, currently carrying a Zacks Rank #3 (Hold), is making every effort to enhance functionalities of cloud-based applications, which is encouraging adoption.

Non-GAAP total operating expenses increased 4% year over year (up 3% at cc) to $5.394 billion. As a percentage of non-GAAP revenues, the figure is unchanged at 55.4% from the prior-year quarter’s levels.

Cloud services and license support revenues are projected to grow more than 5% in both USD and at cc for the current quarter.

The Zacks Consensus Estimate for the same is pegged at $1.10 per share.