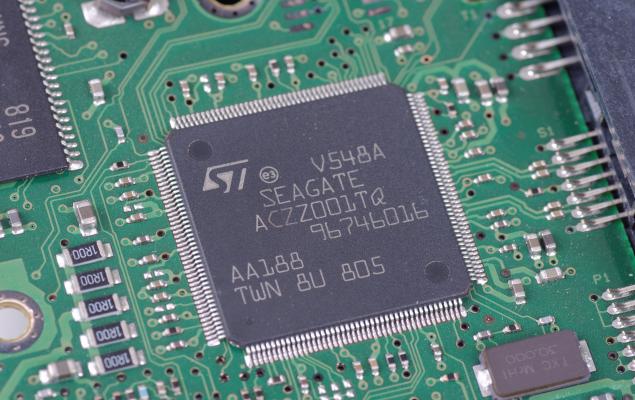 Seagate Technology Holdings plc (STX – Free Report) reported fourth-quarter fiscal 2021 non-GAAP earnings of $2.00 per share, which beat the Zacks Consensus Estimate by 7.5%. The bottom line increased 66.7% from the year-ago quarter’s figure and 35.1% sequentially. Management had anticipated non-GAAP earnings per share for fiscal fourth quarter to be $1.85 per share (+/- 15 cents).

Non-GAAP revenues of $3.031 billion outpaced the Zacks Consensus Estimate by 1.6%. The figure improved 19.7% on a year-over-year basis and 10.3% sequentially. Management had anticipated fiscal fourth-quarter revenues of 2.95 billion (+/- 150 million).

Following the announcement, shares of Seagate are up 2.6% in the pre-market trading on Jul 21. In the past year, shares of the company have returned 72.8% against the industry‘s decline of 24.6%.

During the reported quarter, Seagate shipped 152.3 exabytes of hard disk drive (“HDD”) storage, with an average capacity of record 5.4 terabytes (TB) per drive. This marked year-over-year improvement of 30% and sequential growth of 9% in total HDD exabytes shipments.

The company shipped 123.3 exabytes for the mass capacity storage market (includes nearline and video and image applications as well as network-attached storage or NAS). This marked sequential growth of 11% and year-over-year improvement of 36% in exabytes shipments. Average mass capacity per drive fell sequentially to 9.4 TB from 9.6 TB.

In the nearline market, the company shipped 101.4 exabytes of HDD, up 28% year over year and 6% sequentially.

Non-HDD segment revenues (9%), which include enterprise data solutions, cloud systems and SSDs, was $276 million, up 16% sequentially and 42% year over year.

Non-GAAP operating expenses were up 11% on a year-over-year basis to $346 million.

Non-GAAP income from operations were $546 million, up 46.4% from the year-ago quarter’s figure. Non-GAAP operating margin expanded 330 bps from the prior-year quarter’s reported figure to 18.1%.

Cash flow from operations was $478 million compared with $378 million reported in the previous quarter.

Free cash flow for the reported quarter amounted to $354 million compared with $274 million in the previous quarter.

Seagate’s board of directors approved a cash dividend of 67 cents per share. The dividend will be paid out on Oct 6 to shareholders of record as of the close of business on Sep 22.

Meanwhile, non-GAAP earnings per share for fiscal first quarter is expected to be $2.20 per share (+/- 15 cents). The Zacks Consensus Estimate for earnings is pegged at $1.93 per share.

Zacks Rank & Other Stocks to Consider

Some other top-ranked stocks in the broader technology sector worth considering are Shopify (SHOP – Free Report) , NVIDIA (NVDA – Free Report) and Zoom Video (ZM – Free Report) . All the stocks sport a Zacks Rank #1. You can see the complete list of today’s Zacks #1 Rank stocks here.

The long-term earnings growth rate for Shopify, NVIDIA and Zoom Video is currently pegged at 25%,17.6% and 15.6%, respectively.