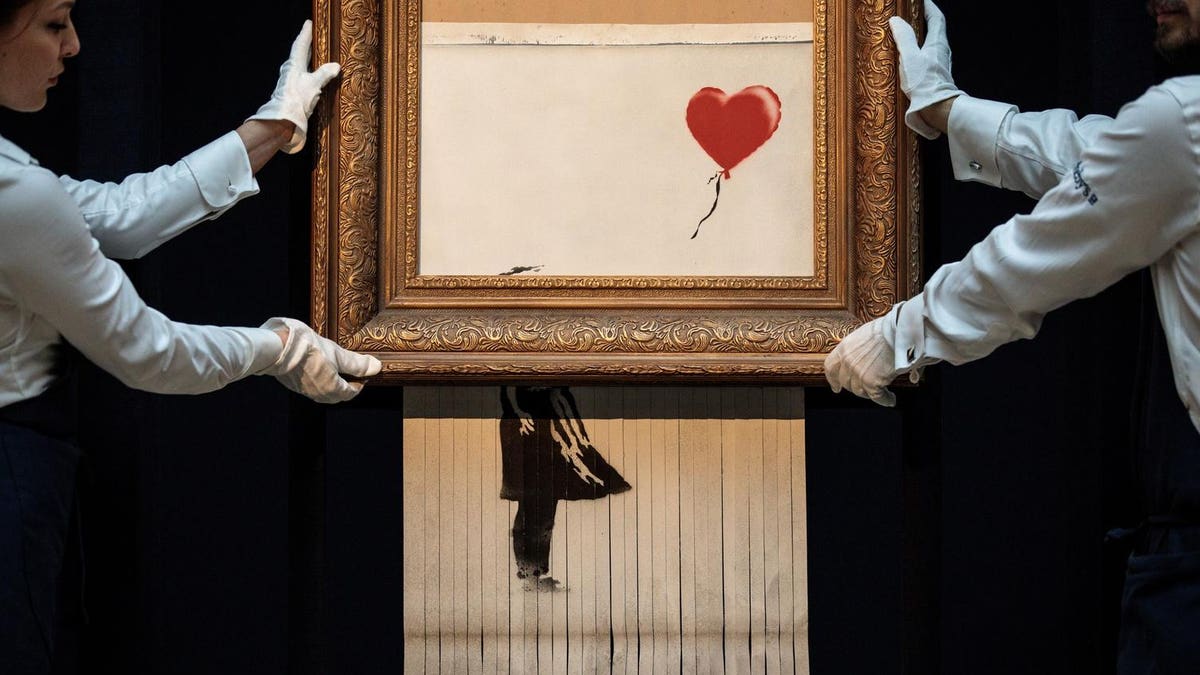 A shredded painting by the anonymous street artist Banksy sold for almost 18 times more than what it sold for when it was intact and set a record for the artist, according to multiple reports, adding to the allure of one of the art world’s most mysterious figures.

LONDON, ENGLAND – OCTOBER 12: Sotheby’s employees pose with ‘Love is in the Bin’ by British artist … [+] Banksy during a media preview at Sotheby’s auction house on October 12, 2018 in London, United Kingdom. During Sotheby’s Contemporary Art Sale on 5th October the Banksy artwork ‘Girl with Balloon’ shredded through the bottom of the frame as it was sold. With Banksy being responsible for the shredding, the buyer has agreed to proceed with the sale and it is now titled ‘Love is in the Bin’ and said to be worth more than the GBP1.04million paid. (Photo by Jack Taylor/Getty Images)
Getty Images

The painting, “Love is in the Bin,” was won Thursday for GBP18.5 million, or $24.5 million — GBP17.5 million more than the GBP1 million it sold for as “Girl With Balloon” in 2018, at which point half the artwork self-shredded through a device in its frame, much to the surprise of the buyer, according to the Wall Street Journal.

At least nine bidders fought in person and over the phone for 10 minutes trying to secure the painting, pushing its price to new heights.

$20 million. That was the artist’s previous record for his largest sale. In March, Banksy painted “Game changer,” a boy playing with a toy that fetched over GBP16 million — all of which was donated to Britain’s National Health Service and other healthcare charities.

“I can’t tell you how nervous I am to drop the gavel on this one,” auctioneer Oliver Barker said during the sale, waiting for the painting to destruct like it had in 2018.

“Love is in the Bin,” featuring the outline of a girl holding a red heart-shaped balloon, is one of Banksy’s best-known works. Sotheby’s London garnered negative attention when it auctioned off “Girl With Balloon,” and the painting shredded, sparking criticism over the house not noticing the device in the frame. The buyer of the shredded artwork, who is anonymous, was originally shocked at its destruction, though at the time she realized the rips would make it much more valuable in the future, an intuition that paid off Thursday, according to The Guardian. Most of Banksy’s work starts off as murals around England which are later removed and then sold at auction, much to the dismay of Brits who enjoy the free artwork in their cities.

Is Banksy The Artist A Genius Or Fraud? (Forbes)