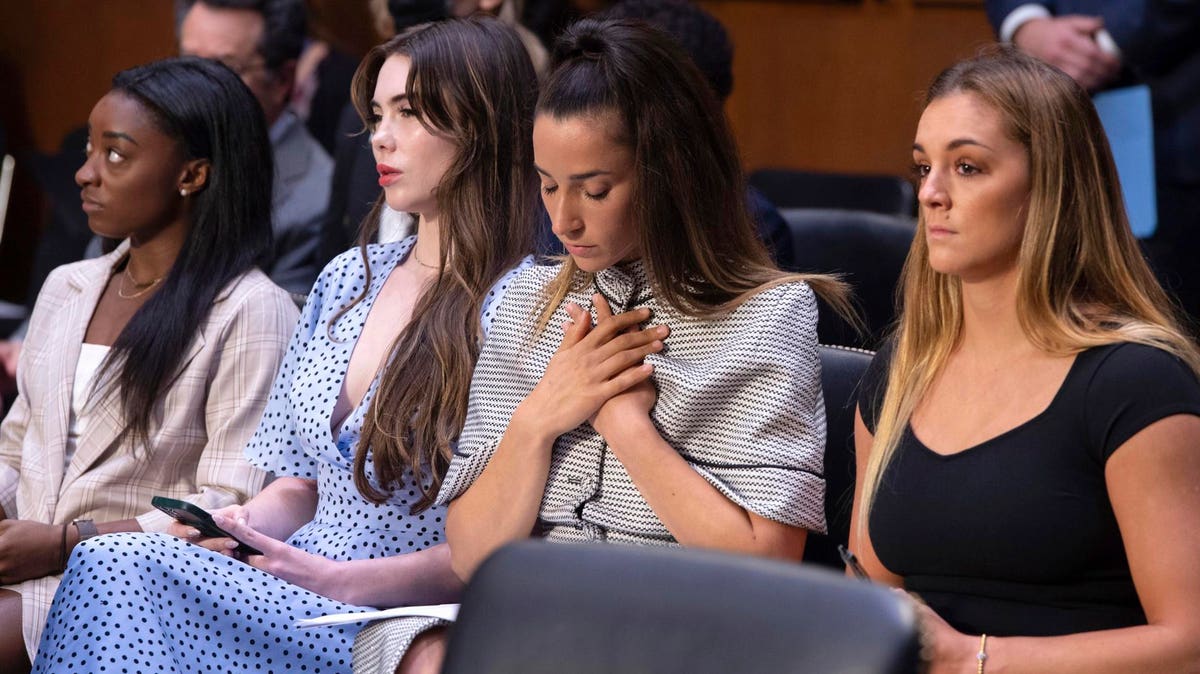 Four elite gymnasts who say they were abused by former team doctor Larry Nassar denounced the FBI Wednesday during a Senate Judiciary hearing on the agency’s handling of the investigation into the prominent gymnastics doctor, who was sentenced to prison in 2019 after being accused of sexually abusing more than 100 women and girls.

Simone Biles, the most decorated American gymnast in history, described feeling “failed” by the FBI during the hearing, saying the agency “turned a blind eye to us.”

Biles became emotional during her testimony when she said she blamed Nassar as well as the wider gymnastics system that “enabled and perpetrated his abuse.”

Aly Raisman, captain of the U.S. Women’s Gymnastics team during the 2012 and 2016 Olympic Games, said her reports of Nassar’s abuse were mishandled by authorities who “failed to handle their most basic duties.”

Raisman said that despite being reported as early as 2015, the doctor had been permitted to “slip out the side door” and continue to have access to gymnasts for more than a year, which Raisman compared to “serving innocent children up to a pedophile on a silver platter.”

McKayla Maroney, a medalist from the 2012 Olympics, said her experience was “minimized and disregarded” by the officials meant to protect her.

Maggie Nichols, a former collegiate gymnast at the University of Oklahoma and eight-time national champion, said the FBI failed to interview her for more than a year after she reported her abuse, during which time she said Nassar continued to abuse women and girls.

In July, a Department of Justice released a damning report that found the FBI “mishandled” their probe into allegations against Nassar and that their botched investigation allowed him to abuse more victims in the meantime. The Office of the Inspector General said the FBI’s Indianapolis Field Office did not begin taking steps to investigate until a month after USA Gymnastics reported sexual abuse allegations against Nassar in 2015, and even then only interviewed one of three athletes who volunteered to be interviewed. After that single interview, the OIG said agents did not revisit the case for eight months. Nassar’s victims have alleged the doctor’s sexual assaults continued during that time. The FBI responded by saying the report described actions that are “inexcusable and a discredit to this organization.” Nassar was convicted in 2018 after pleading guilty to child pornography charges, evidence tampering and sexual assault, and sentenced to up to 175 years in prison.

Whether an independent investigation will happen. Some Democratic and Republican senators have expressed their support for one. Raisman said another investigation needs to look into the relationship between the FBI, USA Gymnastics and the United States Olympic and Paralympic Committee groups. She speculated the athletes’ abuse may have been covered up by the groups in order to protect sponsorships, Los Angeles’ bid to host the 2028 Olympic Games or to shield gymnastics and Olympics officials from criminal liability or losing their jobs.

“A survivor’s healing is affected by the handling of their abuse,” Raisman said. “It disgusts me that we are still fighting for the most basic answers and accountability over six years later.”