Stocks on back foot as inflation, tax and regulation woes weigh 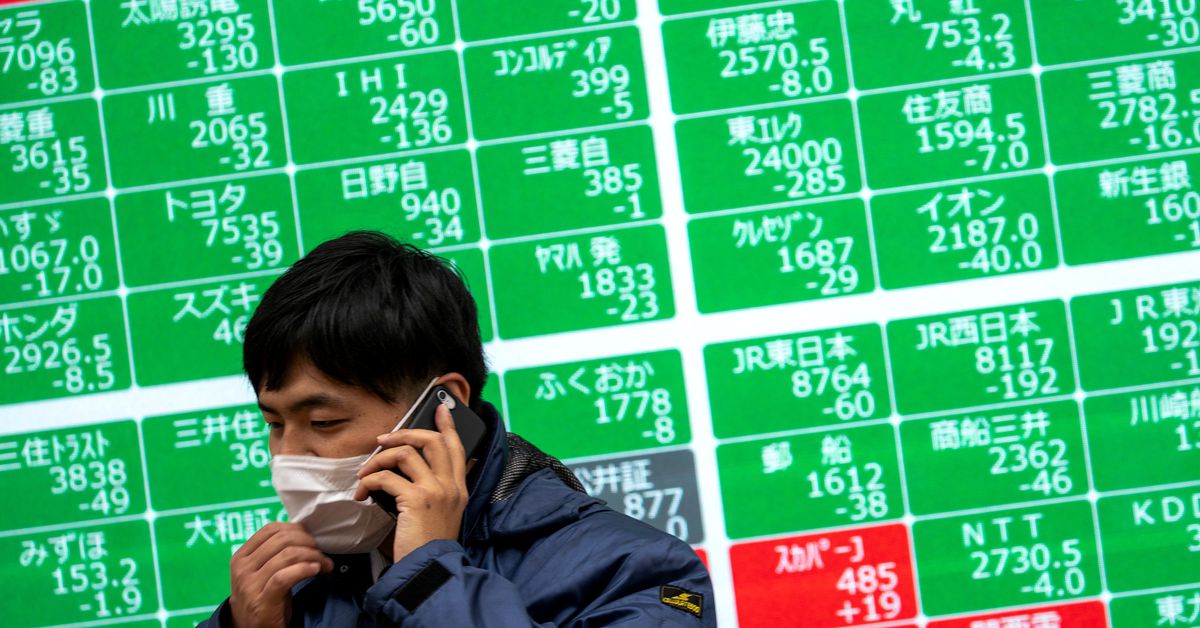 LONDON, Sept 13 (Reuters) – World stocks started the week on the back foot on Monday, slipping to 2-1/2 week lows on further signs of accelerating inflation as well as tax and regulatory pressures on the world’s biggest companies.

Equity markets are down so far in September after a seven-month winning streak. They have been pressured by inflation which may prove less transitory than flagged by central bankers, and signs that governments are keen to get more tax from companies and to make them toe a stricter regulatory line.

A more upbeat tone in European markets was offset by angst from China, which fired a fresh regulatory shot at its tech giants — telling them to end a long-standing practice of blocking each other’s links on their sites or face consequences. read more

That helped push the Chinese blue-chip index (.CSI300) 0.5% lower. It follows a Friday court ruling on Apple (AAPL.O) that hit the iPhone maker’s shares, while more reports emerged at the weekend that U.S. Democrats are mulling proposals to increase taxes on corporations and the wealthy. read more

“We will see more of the state finding ways to extract funding from those it deems most capable of providing it,” said Tom O’Hara, portfolio manager at Janus Henderson.

Adding to concerns is the continued acceleration in inflation, with Japan reporting wholesale prices at 13-year highs last month. That comes on top of data showing factory gate inflation at more than decade-highs in the United States and China, pressuring firms to pass on price rises to consumers.

“The market has been looking through inflation levels, assuming they are transitory and that interest rates won’t go up much but the conundrum is that wherever we look, we see inflation, whether on supermarket shelves or at the petrol pump,” O’Hara added.

“We will probably see more inflation and interest rate rises than people think.”

Indeed, a market gauge of euro zone inflation expectations rose to its highest since mid-2015
on Monday as supply bottlenecks and stronger than expected inflation prints encourage investors to seek inflation protection.

Inflation in the bloc will “in all likelihood” ease as soon as next year but the European Central Bank is ready to act if it doesn’t, ECB policymaker Isabel Schnabel said.

U.S. consumer prices, due on Tuesday, are a key focus for markets with the core measure seen easing a touch, albeit to a still-high 4.2%.

“We believe that global reflation is still alive and this narrative of rapidly weakening growth — we don’t see much evidence for this at all,” said Mike Riddell, head of macro unconstrained at Allianz Global Investors.

“Of course we can change our minds, but our view is that it’s the bond market that’s wrong, and we’re going to start seeing higher real yields and higher nominal yields as central banks start to catch up with what is a very strong global economy right now.”

BNP Paribas, while expecting the S&P 500 to stay unchanged by end-2021, highlighted risks from “higher yields and taxes, at a time when earnings momentum has slowed from excellent to good”.

Oil prices were at one-week highs above $73 a barrel due to shuttered output in the United States, the world’s biggest producer, following damage from Hurricane Ida . read more

Reporting by Sujata Rao; additional reporting by Wayne Cole in Sydney and Dhara Ranasinghe in London; editing by Emelia Sithole-Matarise and Chizu Nomiyama