Stocks Stopped Their Slide, At Least For The Moment 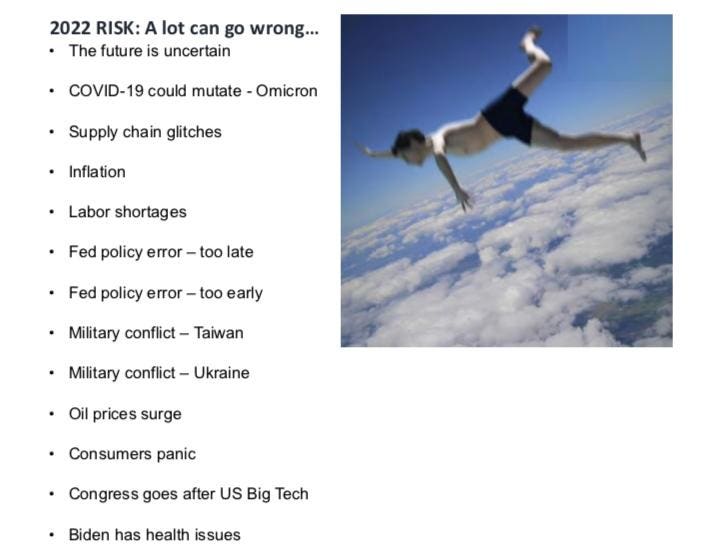 Four charts indicate that stocks are oversold. However, they still trade above historical averages and the 10-year U.S. Treasury bond will be a big factor in how stocks perform this year.

The S&P 500 Index RSI or Relative Strength Index is at 38.07 as of the close on Friday, which is the red circle in the top of the chart. It had been below 30, typically showing an oversold condition, for about seven trading days.

A key factor on Monday for the Index to move higher is moving and closing above its 200 DMA or daily moving average, which is at 4,435.04 (the red circle by the 4400) since the Index closed just below that on Friday. The Index has closed below that level for six days, which means the 200 DMA could be a resistance level.

While the S&P 500 Index is trading only slightly below its 200 daily moving average, this chart shows that over half the stocks in the Index are below it. This isn’t too surprising since one would expect over 50% would be below, but it does show that except in major downturns there should be a sharp rebound.

Percent of S&P 500 stocks above their 200 daily moving average
StockCharts.com

This chart shows the net number of new highs vs. new lows in the New York Stock Exchange. At 532 more new lows than highs on Friday this indicator has reached levels that have only been seen a few times in the past five years.

The Volatility Index or VIX closed at 27.66 on Friday. After a relatively calm 2021, this Index has jumped from about 20 in two weeks. It also appears that it has reached a temporary high and due for a pullback. The VIX tends to move higher when stocks fall and moves lower when stocks rise.

Valuations have come down but are still high

While the S&P 500 Index’s forward 12-month P/E ratio of 19.2x is above its 5-year average of 18.5x and 10-year average of 16.7x per John Butters, FactSet’s Senior Earnings Analyst, it has decreased noticeably from 21.3x. In the short-term to even medium-term timeframes valuation metrics may not determine how stocks will move, at least for now stocks are not as extended as they have been for the past 18 months.

The U.S. 10-year Treasury bond is the big wildcard

It has pulled back to 1.78% as of Friday, but since investors are expecting the Fed to raise interest rates starting in March and throughout the year (as signaled by Fed officials) this metric will almost certainly remain volatile over the next few months, if not the rest of the year. Changes in the rate could lead to stocks having large swings, especially since computer trading programs can dominate the markets in the short-term.