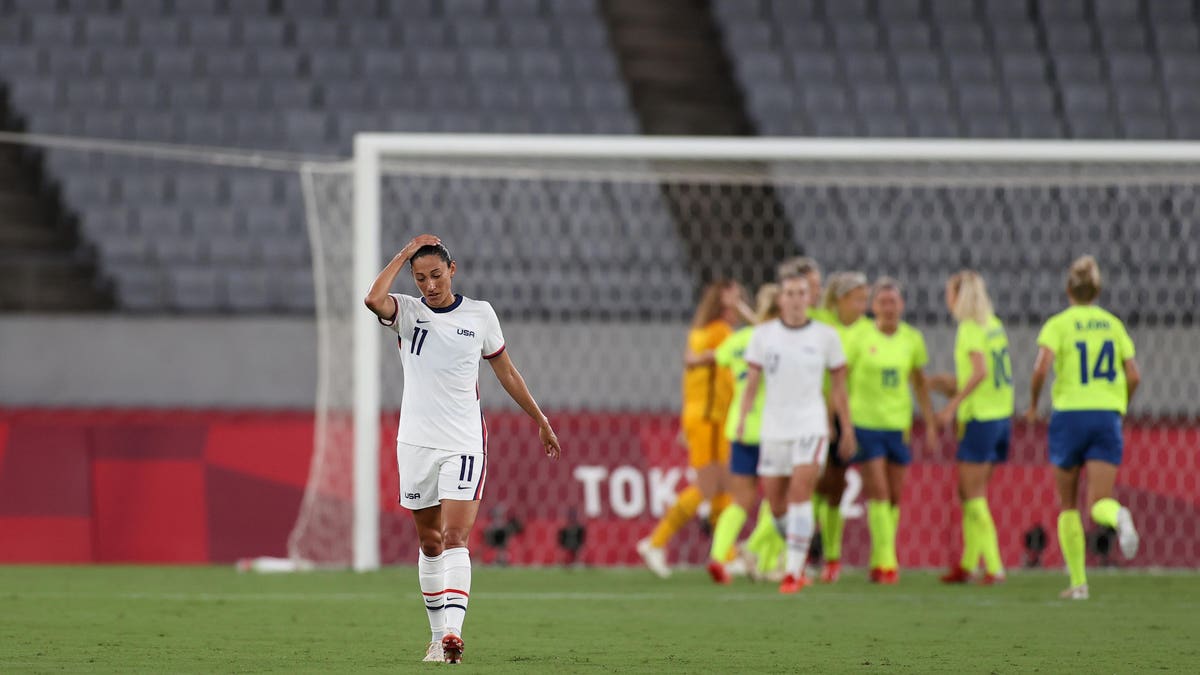 Team USA has lost one of its first events at the 2020 Olympics after the U.S. women’s soccer team was beaten 3-0 by old rivals Sweden on day one of the beleaguered games in Tokyo.

Christen Press #11 of Team United States looks dejected after their side concede a third goal scored … [+] by Lina Hurtig #8 of Team Sweden during the Women’s First Round Group G match between Sweden and United States during the Tokyo 2020 Olympic Games at Tokyo Stadium on July 21, 2021 in Chofu, Tokyo, Japan. (Photo by Dan Mullan/Getty Images)
Getty Images

The long-anticipated game was seen as a chance to redress the U.S. women’s team loss to Sweden during the quarter-finals of 2016’s Rio Olympics.

But the U.S. team’s defeat now narrows their chances of taking the gold medal, and was the cause of major upset as it ends an impressive run of 44 matches unbeaten.

The match was played in an empty Tokyo stadium, in line with the games’ ban on spectators to minimize the spread of Covid.

The Olympics 2020 opening ceremony will take place on Friday. The in-person audience at the Olympic stadium will reportedly be limited to a few “VIP” guests, including sponsors and diplomats. That will mark the event’s official start, although a few competitions kicked off from Wednesday, including soccer and softball, which the U.S. won their first match in the women’s tournament early Wednesday.

The Tokyo Games, billed by the World Health Organization as a “celebration of hope,” finally got underway Wednesday after months of uncertainty over whether they would go ahead. Threatened by the coronavirus pandemic and widespread opposition in Japan, the event has been overshadowed by dozens of positive cases linked to the games, while the organizing International Olympic Committee has taken unprecedented steps to prevent the spread of Covid-19. Daily tests, restricted movements and pre-approved rooms are in place for athletes, who face stringent consequences if they breach the rules.

WHO chief, Dr Tedros Adhanom Ghebreyesus, told the IOC at the start of the games: “The mark of success is making sure that any cases are identified, isolated, traced and cared for as quickly as possible, and onward transmission is interrupted. That is the mark of success for every country.” He added: “The Olympics have the power to bring the world together, to inspire, to show what’s possible. It is my sincere hope the Tokyo Games succeed.”

Two Olympic athletes have already been told they can’t compete after testing positive for Covid-19. Chile’s Fernanda Aguirre, will be in quarantine and therefore unable to compete in the taekwondo competition, while Dutch skateboarder Candy Jacobs will also no longer compete because of quarantine. Meanwhile, Poland sent six swimmers home from Japan after realizing it mistakenly selected too many.