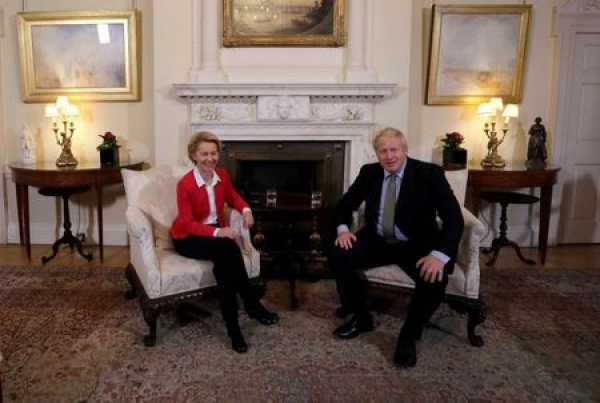 Since it completed its exit from the EU at the end of last year, Britain’s ties with the bloc have reached new lows, with both sides accusing each other of acting in bad faith over an agreement for post-Brexit trade with Northern Ireland.

London accuses Brussels of being too purist, or legalistic, in interpreting what the deal means for some goods moving from Britain to its province of Northern Ireland. The EU says it is adhering to the deal, which Johnson signed just last year.

Britain proposed on Wednesday to renegotiate parts of the Northern Ireland protocol that govern the movement of goods such as chilled meats, and to dispense with EU oversight of the accord.

The EU has rejected the demand to renegotiate, with von der Leyen repeating the bloc’s message on Twitter, saying: “The EU will continue to be creative and flexible within the Protocol framework. But we will not renegotiate.”

“The prime minister set out that the way the protocol was currently operating was unsustainable. He said that solutions could not be found through the existing mechanisms of the protocol and that’s why we’d set out proposals for significant changes to it,” Johnson’s spokesman told reporters.

Johnson urged the EU to “look at the proposals seriously and work with the UK on them” saying this would put the UK-EU relationship on a better footing.

Britain drafted the proposals in one paper that it issued on Wednesday to try to force stuttering negotiations forward on making the so-called protocol work better. Some critics say few of the suggestions are new and could largely be dismissed by the EU.

The protocol addresses the biggest conundrum raised by the divorce: how to preserve the delicate peace brought to the province by the U.S.-brokered 1998 Good Friday peace accord – by maintaining an open border – without opening a back door through neighbouring Ireland to the EU’s single market of 450 million people.

It essentially requires checks on goods between the British mainland and Northern Ireland, which remains part of the EU customs area. These have proved burdensome to companies and an anathema to unionists, who are fiercely supportive of the province remaining part of the United Kingdom.