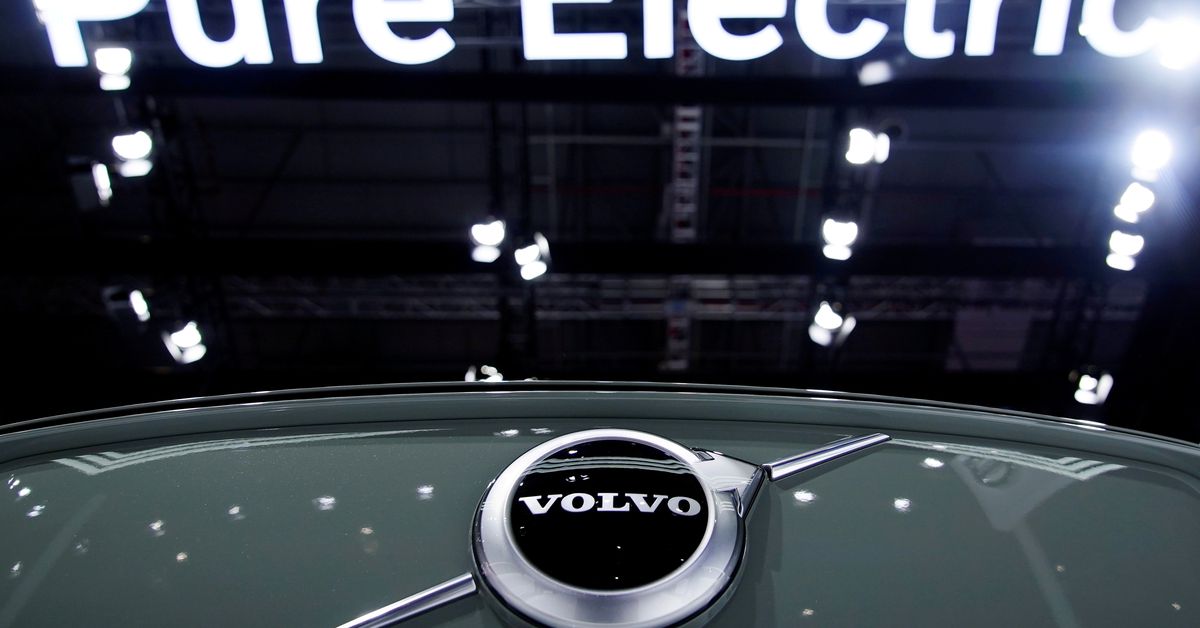 A Pure Electric sign is seen above a Volvo vehicle displayed during a media day for the Auto Shanghai show in Shanghai, China April 20, 2021. REUTERS/Aly Song/File Photo

STOCKHOLM, Sept 15 (Reuters) – China’s Geely Holding (GEELY.UL) is in advanced discussions with banks to list its Volvo Cars unit in the coming weeks, three sources told Reuters, in what is expected to be one of Europe’s biggest initial public offerings (IPOs) this year.

Volvo Cars is aiming for a valuation of about $20 billion in the planned Stockholm listing, the sources said, with one saying the launch was pencilled in for the end of September.

Goldman Sachs (GS.N) and SEB are leading the transaction, while other banks including BNP Paribas (BNPP.PA), Carnegie and HSBC (HSBA.L) are also involved in the deal, the sources added.

Geely, which bought Volvo from Ford Motor(F.N) more than a decade ago in the biggest acquisition by a Chinese firm of a foreign car maker, sought to float shares in the Swedish firm in 2018 but then pulled the deal citing trade tensions and a downturn in automotive stocks. read more

Traditional carmakers have fallen out of favour in recent years, as Tesla (TSLA.O) has risen to be one of the world’s most valuable companies, putting the focus on electric vehicles.

Many European firms have pivoted toward the electric sector, including Volvo Cars which aims to only make fully electric cars by 2030 and owns a 49.5% stake in electric car maker Polestar.

Gothenburg-based Volvo Cars aims to secure a valuation of roughly $20 billion, one of the sources said, while another mentioned a possible range of $20 billion to $30 billion.

A $20 billion valuation for Volvo would be equivalent to six to seven times its earnings, a level some analysts say is high although it would put it in line with rivals Daimler (DAIGn.DE) and BMW (BMWG.DE). Tesla’s valuation is more than 70 times.

“The strong margins seen in the first half of 2021 are unlikely sustainable as the market benefited from a strong post-pandemic rebound that is unlikely to continue,” Schwope said.

For Geely’s founder Li Shufu, who bought Volvo for $1.8 billion, the listing is a milestone on the road to transport of the future, where cars are part of an electrified network of mobility services generating data and business opportunities.

A slew of startups have tapped into the investor frenzy for electric vehicles this year. Rivian, which rolled its first electric pickup truck off the production line this week, will seek a valuation of about $70 billion to $80 billion when it goes public at the end of this year, sources have told Reuters.

Nordea Chief Investment Officer John Hernander said the bank was interested in buying Volvo shares if a big enough chunk of the company was sold to keep liquidity high.

“That is key. We and many others have been really disappointed in the low liquidity in Traton,” he said, drawing parallels to the 2019 IPO of the truck unit, in which owner Volkswagen (VOWG_p.DE) floated 11.5% of the shares.

Volvo warned this month that sales volumes in the second half of 2021 could fall year on year after it had been forced to cut production due to material shortages. read more