Where Will Baidu Stock Be in 1 Year? @themotleyfool #stocks $BIDU $IQ 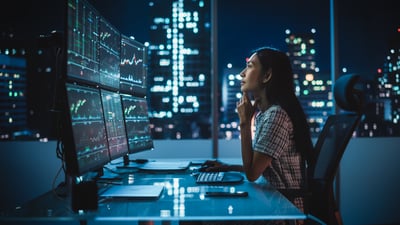 Those headline numbers suggest Baidu’s business is gradually stabilizing, but its stock has still dropped 36% over the past 12 months. Could this out-of-favor tech stock bounce back over the next 12 months?

What happened to Baidu?

Baidu owns the largest online search engine in China. This core business generates most of its revenue from digital ads, and it initially grew like a weed after Alphabet‘s Google shut down its search engine in mainland China in 2010.

But over the past several years, Baidu has been challenged by Tencent‘s “super app,” WeChat, which bundles together mobile messages, a social network, digital payments, online searches, and other services for its 1.31 billion monthly active users (MAUs). Shoppers also initiated their product searches on top e-commerce sites instead of Baidu, while short video platforms like ByteDance’s Douyin (known as TikTok overseas) lured away its users and advertisers.

What are Baidu’s turnaround strategies?

Baidu is trying to refresh its business with three main strategies. First, it’s expanding its managed business pages, which enable it to handle a company’s entire online presence within its ecosystem, to reduce the online marketing segment’s dependence on traditional search and display ads. Second, it’s been expanding its mobile app into a super app that bundles together multipurpose “mini programs” like WeChat. That expansion is paying off: The Baidu app ended the third quarter with 634 million MAUs, representing 5% growth from a year earlier.

Lastly, it’s expanding its cloud platform, Baidu AI Cloud, which drives the growth of its “non-online marketing” revenue. Baidu AI Cloud only controlled 9% of China’s cloud market in the second quarter of 2022, according to Canalys, putting it in a distant fourth place behind Alibaba Cloud (34%), Huawei Cloud (19%), and Tencent Cloud (17%). However, it continues to expand and serves as the technological foundation for its driverless vehicles and other artificial intelligence businesses.

In the third quarter, Baidu’s online marketing revenue fell year over year for the third consecutive quarter. However, the segment’s revenue still grew 10% sequentially as the retail and healthcare sectors warmed up again. During the Q3 conference call, CEO Robin Li predicted that when the “COVID situation alleviates in major cities, ad revenues across different verticals such as travel, franchising, and local services should rebound.”

iQiyi’s revenue fell year over year for the fourth straight quarter, but it improved 12% sequentially as its number of subscribers grew nearly 3% quarter over quarter to 101 million. Meanwhile, the accelerating growth of Baidu’s non-online marketing segment offset the slower growth of its other two segments and enabled its total revenue to grow again.

As Baidu’s revenue growth stabilized, its total operating margin rose 9 percentage points year over year and 5 percentage points sequentially to 16% in the third quarter. That expansion was driven by tighter spending across its advertising and iQiyi segments, which complemented the improving margins of its unprofitable cloud business.

Where will Baidu’s stock be in a year?

Baidu didn’t provide any guidance, but Li predicted that the overall COVID-19 situation “should improve” and that its core businesses “should move in a positive direction over the next few quarters.”

For now, analysts expect Baidu’s revenue to stay nearly flat this year but to grow 13% in 2023 as it laps this challenging year. They expect its net income to decline 32% this year, but to also soar 111% in 2023. Based on those expectations, Baidu trades at just 16 times next year’s earnings.

We should take those estimates with a grain of salt, but I wouldn’t be surprised if Baidu’s stock advances over the next 12 months as the macro situation improves and China finally relaxes its zero-COVID lockdowns. However, investors might want to wait another quarter to see if it exhibits clearer signs of a long-term turnaround.