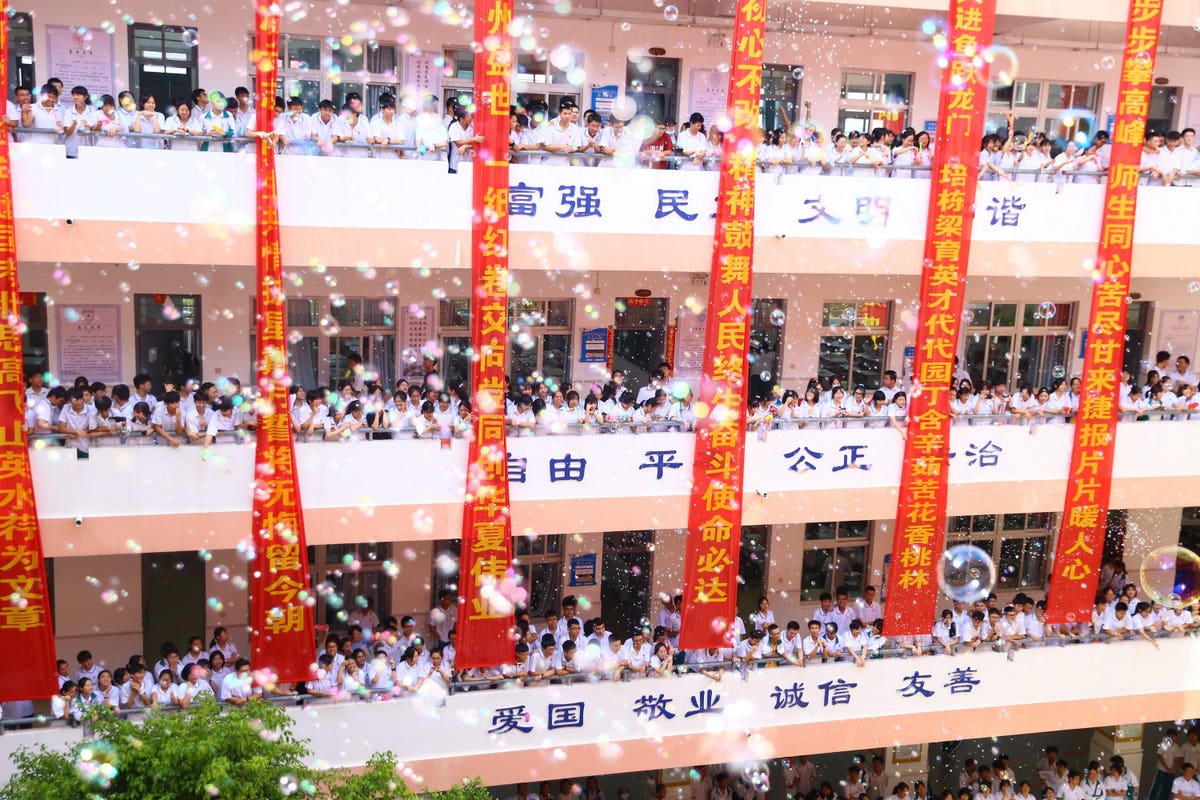 The companies have sucked up a lot of U.S. capital, and they’re not needed anymore. New Oriental
EDU
(EDU) listed in 2006 and has raised around $2.5 billion. TAL Education
TAL
(TAL) has pulled in about $5 billion since its 2010 IPO. The notorious Gaotu Techedu (GOTU) has garnered more than $6 billion. There’s Puxin (NEW), OneSmart (ONE), RYB Education (RYB), and many more. It takes about five minutes of reviewing their statements to suspect that fraud permeates the accounts of each one of these companies.

HAIKOU, CHINA – JUNE 02: Senior three students cheer themselves during an activity to relieve … [+] pressure at Hainan Overseas Chinese Middle School ahead of the 2021 National College Entrance Exam (aka Gaokao) on June 2, 2021 in Haikou, Hainan Province of China. (Photo by Zhang Mao/VCG via Getty Images)
VCG via Getty Images

Before Friday’s debacle, these stocks had already been attacked. A 2018 expose of TAL (the acronym stands for the somewhat incoherent “Tomorrow Advancing Life”) crushed the stock and brought an onslaught of shareholder lawsuits. RYB stock dropped 38% after being credibly accused of child abuse at some locations. Before RYB came Xueda (XUE US), which took its marbles from the NYSE and went home in 2015, saying it would list in Shenzhen and get a better valuation, and, in 2012, a detailed expose on industry leader New Oriental (EDU US). In the same period, Ambow Education (AMBO US) and ChinaCast (CAST US) were both delisted from NASDAQ
NDAQ
after being exposed as frauds.

Investors may rightly wonder: is there something particularly crooked about education in China? If private business is so bent, why have Tencent and Alibaba been so successful?

In China, it is difficult in the extreme to operate a geographically dispersed business, especially one that operates principally in cash. Accounting systems are lax, IT systems poor, and the legal system unreliable when staff misreport or embezzle. Often, good cash flow opportunities are in the hands of locally well-connected families via car dealerships, luxury goods distributors, high-end building material distributors, education and geriatric service operators. Their connections can protect bad behavior toward the brand or franchise owners.

The private education companies are generally consolidators, which acquire affiliates using a mixed strategy of purchase and franchising that usually amounts to coopting local businesses with the inducement of investment and linkages to expanded sales funnels. The local businesses tend to remain as part of the network until a better deal comes along, or until the commercial calculus tilts, and the costs of participation start to outstrip the benefits in business volume, and they break off again, often holding onto the brand. After all, they paid for it.

As long as a company is growing sufficiently to attract rounds of capital and, ultimately, an IPO, the franchised affiliates happily play along. In the first months after IPO, everyone generally remains happy. But the costs of watering the network tend to exceed the profits of the enterprise. Buying minority stakes in affiliate companies or even value-chain adjacencies is the key modus operandi, but the relationship can become frayed under the commercial pressures than inevitably ensue.

A vocational training school in Manzhouli, a Chinese town in Inner Mongolia, on the border with … [+] Siberia
Photo by Anne Stevenson-Yang

This is the fundamental problem faced by the private education companies and the source, in various formats, of their frauds. The Muddy Waters reports proved that New Oriental, which claimed to own all its affiliates outright, is actually a franchise network, and the reports showed that the franchising business was not as profitable as EDU led investors to believe. TAL Education looks like it has been using similar tactics, with the more familiar “prop and tunnel” strategy–prop up publicly reported revenue to drive share appreciation then “tunnel” out the faked earnings into bloated intangible assets, overstated acquisition costs, and capital expenditures.

All of these companies sit within a constellation of unlisted, related-party companies and funds that facilitate fraudulent reporting of revenue, marketing costs, and acquisition values.

Ultimately, private business at scale is a contradiction in terms for the Chinese economy and a phenomenon never contemplated in the vision of the perfected Socialist Market Economy.