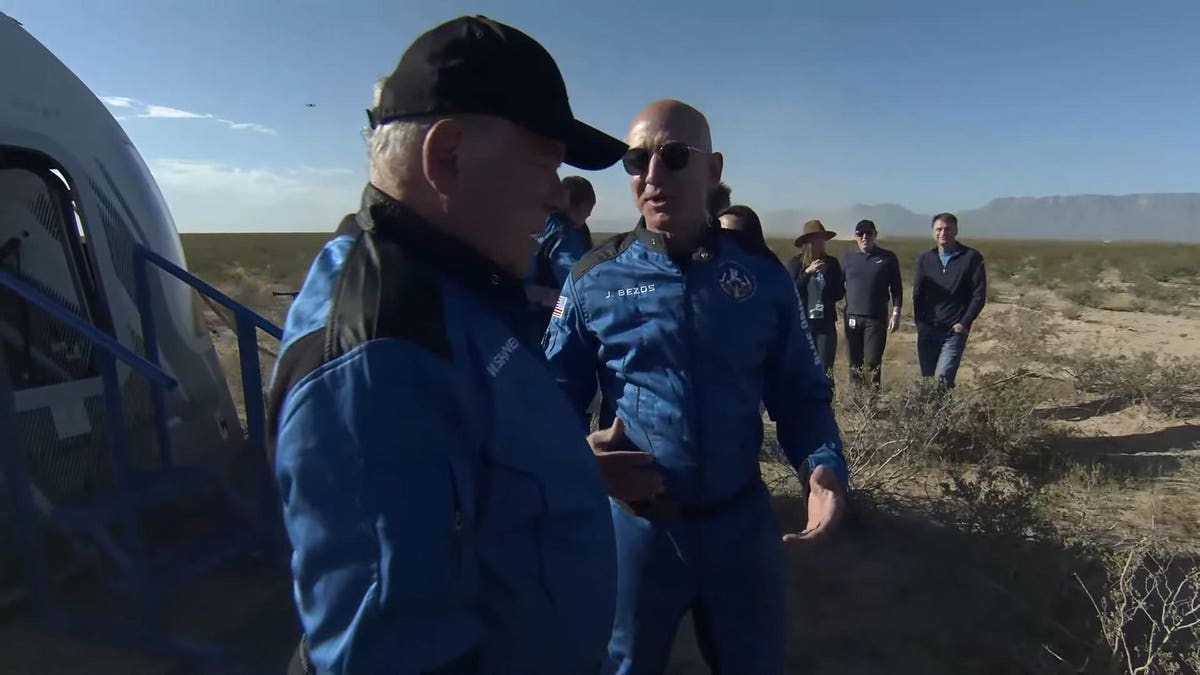 “Star Trek” actor William Shatner finally made it to space with Jeff Bezos’ commercial spaceflight company Blue Origin Wednesday morning, a trip that made the 90-year-old entertainer the oldest person to ever fly to space.

A screenshot taken from a live handout video on October 13, 2021 shows Jeff Bezos talks to William … [+] Shatner after Blue Origin’s New Shepard crew capsule landed back in Texas, the United States. William Shatner, 90, officially became the oldest and most famous person ever to fly to space Wednesday on a rocket launched from the state of Texas. (Photo by Blue Origin/Anadolu Agency via Getty Images)
Anadolu Agency via Getty Images

Shatner and a small crew launched aboard the New Shepard aircraft from West Texas at 10:50 a.m. EST, which was streaming live on Youtube.

The flight brought Shatner and the crew to the edge of the atmosphere, about 340,000 feet above the ground, and returned them safely back to Earth in a little over 10 minutes.

Bezos was on-site to greet and settle the crew into the rocket before the launch and to celebrate with them after they landed.

“Everybody in the world needs to see this… it was unbelievable,” Shatner told Bezos after he exited the rocket. “It was so moving…. the covering of blue. The beauty of that color, you’re through it in an instant,” he marveled, pondering the mystery of life and death through tears. “What you have given me is the most profound experience I could have.”

Blue Origin announced Shatner would travel to space on their second-ever human flight last week. The flight was originally scheduled for Tuesday, but was pushed to Wednesday due to inclement weather. While attending ComicCon in New York last week, Shatner said he was “terrified” of heading to the final frontier. “I don’t want to be known as the oldest guy in space. I’m Captain Kirk!” he joked. Bezos and his brother flew to space on the New Shepard this summer.