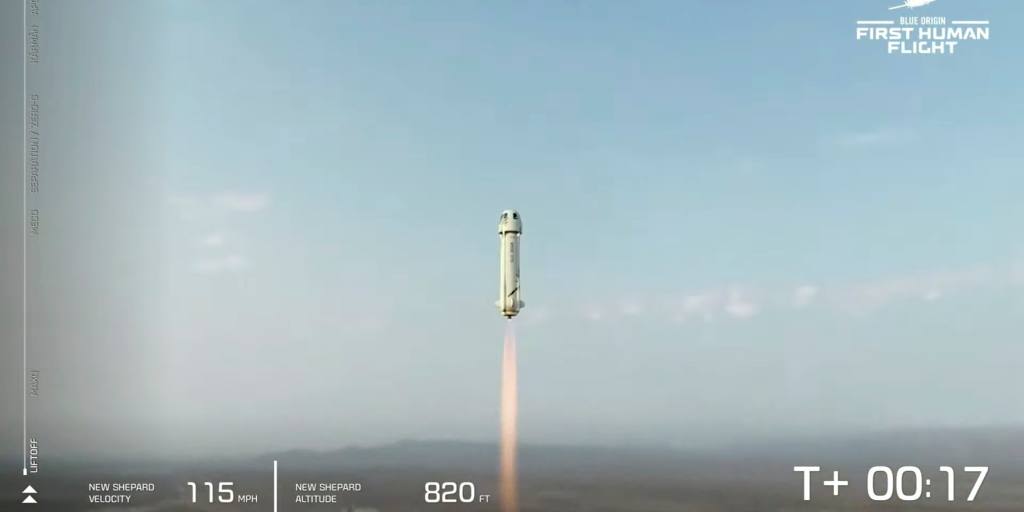 Blue Origin’s New Shepard rocket lifted off at around 9:10 a.m. Eastern time in Texas. The mission came on the 52nd anniversary of the 1969 lunar landing by Neil Armstrong and Buzz Aldrin.

“It’s the best day ever!” said Bezos when he landed in Texas. The American billionaire left as Amazon’s CEO in early July but remains executive chairman of the e-commerce giant.

Amazon shares opened lower on Tuesday as the New Shepard returned safely at about 9:23 a.m.

This marked the 16th flight by the New Shepard but its first with astronauts aboard.

Bezos and three other civilian crew members lifted off from a Blue Origin launch site near Van Horn, Texas. They traveled above the Karman Line, which is seen as the boundary between Earth’s atmosphere and space.

After spending a few minutes in space, the capsule landed in the Texas desert after the 11-minute flight, completing the milestone mission for the space tourism company.

Accompanying Bezos were 18-year-old Oliver Daemen, who replaced the anonymous winner of a live auction who had bid $28 million for the flight, only to postpone the trip over “scheduling conflicts”; Bezos’ brother, Mark Bezos; and 82-year-old aviation pioneer Wally Funk, a veteran female pilot who had trained to be an astronaut during the Cold War space race but never went because only men were allowed.

Bezos’ trip into space came the week after British counterpart Richard Branson and crew attained an altitude of 53.5 miles (86 km) on the VSS Unity rocket plane.

The latter billionaire’s Virgin Galactic, founded in 2004, aspires to be “the spaceline for Earth” by opening up space travel to all. It expects to begin commercial service in 2022.

Branson said this month that he and Bezos were “not really in direct competition,” pushing back against media portrayals of a personal space race.

But Blue Origin boasted days later that its New Shepard, unlike Branson’s Unity, actually makes it into what is generally regarded as space.

“From the beginning, New Shepard was designed to fly above the Karman line so none of our astronauts have an asterisk next to their name,” Bezos’ company tweeted. “For 96% of the world’s population, space begins 100 km up at the internationally recognized Karman line.”

Tesla CEO and billionaire Elon Musk has also entered the space tourism fray. His SpaceX plans to send its first all-civilian crew, without Musk, into orbit this September. The company has already launched dozens of cargo payloads and astronauts to the International Space Station for NASA since 2012.